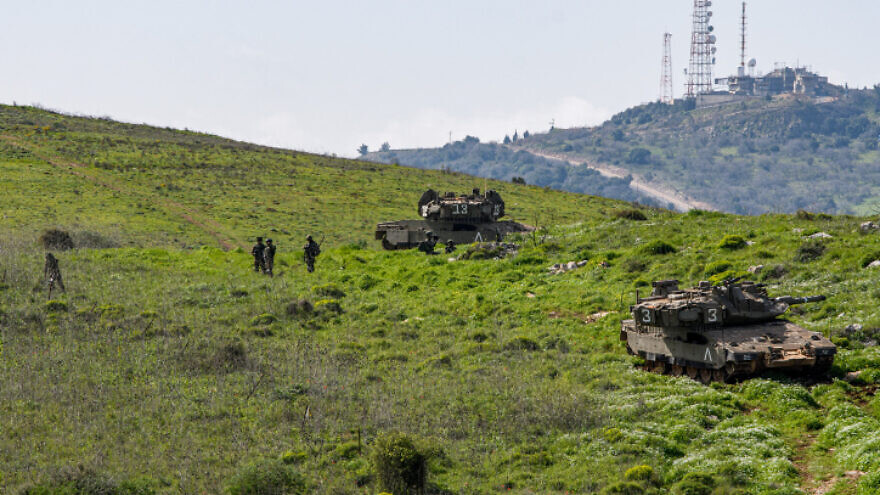 Israeli soldiers patrol the Blue Line, a territory between Israel and Lebanon, near Kibbutz Misgav Am, on March 9, 2021. Photo by Basel Awidat/Flash90.
Spread the word.
Help JNS grow!
Share now:

(June 6, 2022 / JNS) An Israel Defense Forces unit stationed on the Lebanese border in the Ramim Ridge area fired warning shots on Sunday morning after spotting Lebanese soldiers crossing the Blue Line, according to Israeli media reports. The Lebanese troops withdrew following the warning fire, and the IDF continued its operations as normal, according to Ynet.

The Blue Line, which runs for 120 kilometers along Lebanon’s southern frontier, is a “line of withdrawal” set by the United Nations in 2000 for the purpose of confirming the withdrawal of Israeli forces from south Lebanon.

This was the third time in the past seven days that the IDF and LAF have come into close contact, according to the report, which cited IDF sources as saying that Lebanese “operatives” dressed in civilian clothes had accompanied LAF forces during Sunday’s incident.

The IDF unit involved in the incident comprised officer-course cadets from the Geffen Battalion. Lebanese media outlets released footage of the unit.

“The IDF has, this year, enabled infantry cadets from the officer’s school battalion to conduct operational activity on the Lebanese border as well, as part of their training,” according to Ynet. In the past, the battalion was only operationally active in Judea and Samaria.