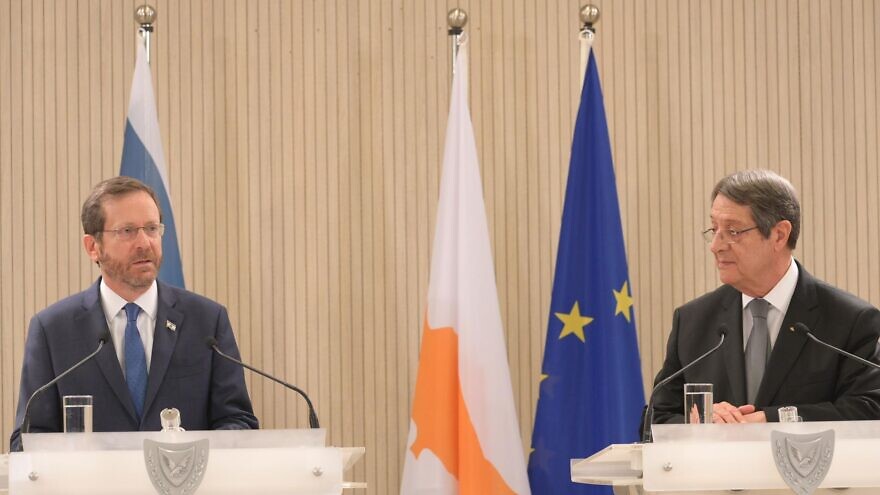 (March 2, 2022 / JNS) Israeli President Isaac Herzog is received in Cyprus with a state ceremony in Nicosia

Israeli President Isaac Herzog arrived in Cyprus on Wednesday for an official visit at the invitation of Cyprus President Nicos Anastasiades, according to an official statement.

Herzog was received by Anastasiades at a state ceremony at the Presidential Palace in Nicosia, which was followed by a private meeting between the two and then an expanded bilateral meeting, with the participation of both delegations.

Later in the day, Anastasiades awarded Herzog Cyprus’s highest honor, the Grand Collar of the Order of Makarios III, “as an expression of the strong friendship between Cyprus and Israel,” according to the statement.

In his statement following the day’s meetings, Herzog first addressed the situation in Ukraine, calling Russia’s invasion of that country “an affront to the international order.”

“I am deeply concerned for the citizens of Ukraine and members of the Jewish community in peril. I hope, and we all hope and pray, [that] this war ends quickly,” he said.

Israel had reaffirmed its support for Ukraine’s territorial integrity and joined the international community in supporting the United Nations General Assembly Resolution censuring Russia for its actions, he continued.

“Israel is working to advance a diplomatic solution in Ukraine and has offered its services in this regard. We are also sending an unprecedented amount of humanitarian aid: 100 tons. We see this as a moral obligation,” he said.

The Israeli prime minister then turned to the subject of Israel’s strengthening relationship with Cyprus, calling it a “pillar of Mediterranean stability, and a key to sustainable, healthy and prosperous region and future.”

Addressing President Anastasiades, Herzog said, “Over the last decade, you have played such a key role in building the deep bonds of friendship between our nations, and in developing our strategic three-way alliance with Greece. Together with our ally Greece, Israel and Cyprus are anchors of stability in the Mediterranean.”

He also thanked his Cypriot counterpart for his leadership in regional forums, particularly in the fields of climate and energy. “We strongly support developing such forums through strategic action plans, and expanding them to include additional partners, especially the United States,” he said.

Bilateral cooperation has continued to grow in multiple fields, from tourism to energy, to homeland security, emergency response and technology, said Herzog.

“This cooperation is creating new economic opportunities for our citizens, while making our borders and cities more secure,” he said.

The Israeli president concluded his remarks by touching once again on the situation in Ukraine, saying, “The conflict that is currently unfolding in front of our eyes is a tragic reminder of the necessity of working together to protect our dearest values, principles, and interests.”