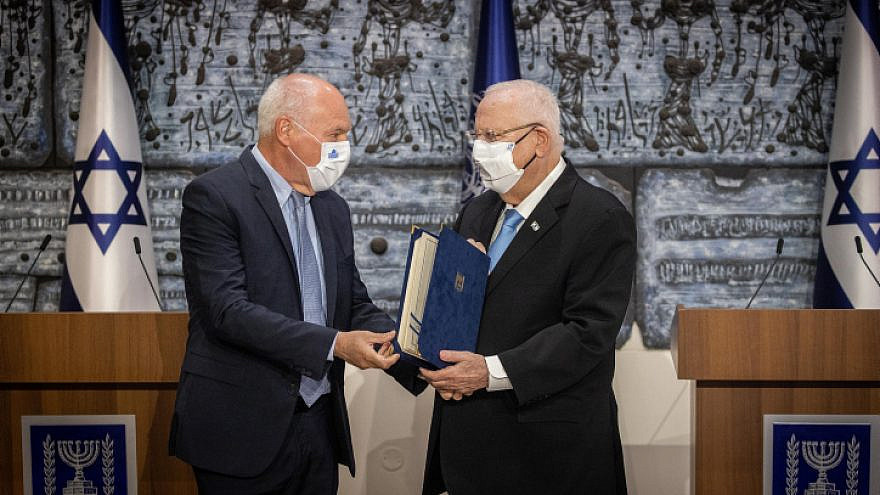 Israeli President Reuven Rivlin receives the official election results from the head of the Israeli electoral committee, judge Uzi Vogelman, during a ceremony at the President's Residence in Jerusalem on March 31, 2021. Photo by Yonatan Sindel/Flash90.
Spread the word.
Help JNS grow!
Share now:

(March 31, 2021 / Israel Hayom) The head of Israel’s Central Elections Committee presented the results of the country’s March 23 elections to President Reuven Rivlin on Wednesday in an official ceremony at the President’s Residence in Jerusalem.

In his address, Rivlin expressed his confidence that Israel would weather its protracted political deadlock.

“The political crisis that is shaking us is harming and weakening our democracy to a certain extent, but it will not beat us. We are stronger than it. Israeli society is stronger than it,” he said.

“I sincerely hope elected officials will hear the people of Israel, heed its demand for unconventional cooperation, collaboration between sectors, and focused and dedicated work for all Israelis,” he added.

Rivlin is scheduled to meet on Monday with every faction elected to the Knesset, after which he will entrust the task of forming a government to one of the representatives.

The plan is to hold all the consultations in one day to expedite the process. As in previous years, all the meetings will be broadcast live as per Rivlin’s request, for the sake of transparency.