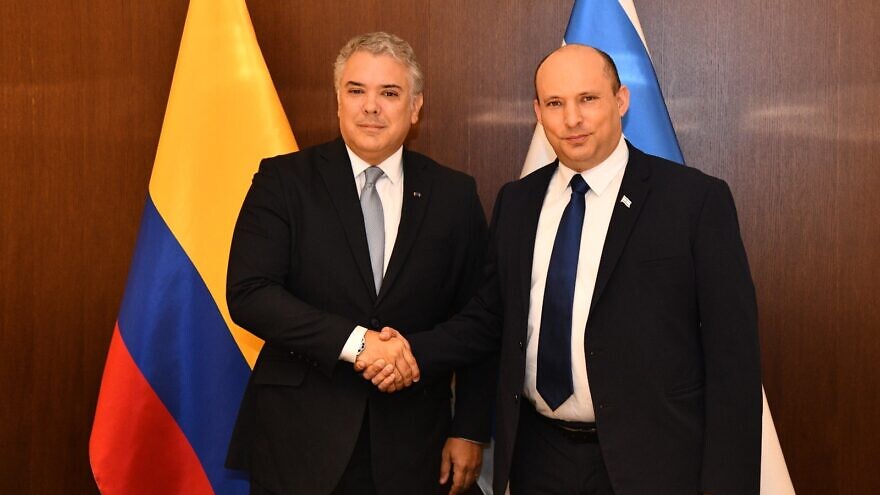 (November 8, 2021 / JNS) Israeli Prime Minister Naftali Bennett met on Monday with Colombian President Ivan Duque, who is in Israel for a state visit.

The two leaders discussed a variety of topics, including bilateral cooperation regarding environmental innovation, trade and common security challenges, according to a statement from Bennett’s office. Bennett thanked President Duque for the addition of Hezbollah and Iran’s Islamic Revolutionary Guard Corps to Colombia’s list of terrorist entities.

“Over the years, the relationship between Israel and Colombia has evolved greatly, and having you here in Jerusalem to open the first Colombian innovation office is a sign that our relationship is growing stronger than ever,” said Bennett.

Israel and Colombia ratified a free-trade agreement in 2020, in what then-Israeli Prime Minister Benjamin Netanyahu called “a historic moment” in the two countries’ relations. Colombia also announced its decision to create an innovation office in the Israeli capital, the opening of which is the main reason for Duque’s current visit.

“We’re honored that you chose Israel to be the first country where Colombia opens an innovation center. It marks another milestone in your legacy, Mr. President, of strengthening the bond between our nations,” said Bennett.

The Israeli premier added that during their meeting they had discussed the “vast opportunities” that existed for bilateral cooperation in a variety of fields, from climate to security.

Prior to meeting with Bennett, Duque visited the Western Wall in Jerusalem’s Old City in what the Israeli premier called “a very meaningful gesture for the Jewish people and the State of Israel.”

“I can tell you confidently that it’s also going to bring you good fortune. There’s a short communication line to the Almighty over there,” said Bennett.