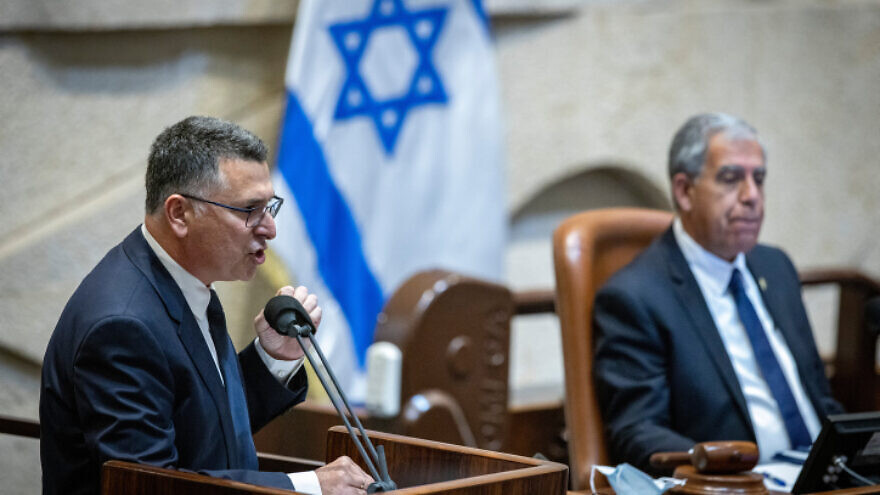 (October 20, 2021 / Israel Hayom) Israeli Justice Minister Gideon Sa’ar on Tuesday released details of a bill that would ban anyone accused of crimes punishable by over three years in prison from forming a government.

If passed, the proposed legislation, an amendment to Israel’s Basic Law: Government, would also prevent indicted individuals from being included in no-confidence votes or being sworn in as alternate prime minister. The law would go into effect with the signing-in of the new Knesset. According to the bill, the Knesset Central Elections Committee could allow such a lawmaker to receive the mandate should the crime not involve “moral turpitude.”

The bill has been the object of dispute within the coalition, drawing criticism from right-wing politicians.

Interior Minister Ayelet Shaked said on Wednesday that she opposed the bill, saying, “I do not think the attorney general should determine who heads the government.”

The Likud Party said in a statement: “Gideon Sa’ar, who in the polls is clawing at the electoral threshold from below, is proposing an Iran-style, anti-democratic law that seeks to disqualify those who earn 35 Knesset seats in the polls and earn the support of millions of citizens as their representative for the premiership. How embarrassing.”

Religious Zionism Party MK Simcha Rothman called the bill “an embarrassment,” both for Gideon Sa’ar and for the state.

“Anyone who does not trust the 61 lawmakers to pick the best candidate and tries to let a clerk decide who can and cannot be prime minister … shows themselves to have no faith in the people, elected officials, and the democratic process,” said Rothman. “This is not ‘reminiscent of darker times,’ this is a dark time,” he added.

Likud MK Miki Zohar said, “Clearly Gideon Sa’ar’s legislation can be corrected as soon as we return to state leadership. The problem is that if the bill passes, anyone who wants to serve as prime minister will need to worry the State Attorney’s Office may not like them and file an indictment against them.”

Joint Arab List head Ayman Odeh tweeted that his party could ensure the bill was passed “by next week.”

In an interview with Army Radio, Jerusalem Affairs Minister Ze’ev Elkin called the bill “the learning of lessons from the reality in which we lived. For years, I thought it was necessary to wait for a conviction, but when I saw how a state can be taken hostage and thrown into a series of election campaigns, I was forced to change my mind. I think it’s unfeasible for Netanyahu to go back to being prime minister. It’s not a personal law.”

Referring to former Prime Minister Ehud Olmert, he said, “There once was a prime minister who had an indictment filed against them and resigned. Such a law is very appropriate and should be a given.”

Yair Altman contributed to this report.