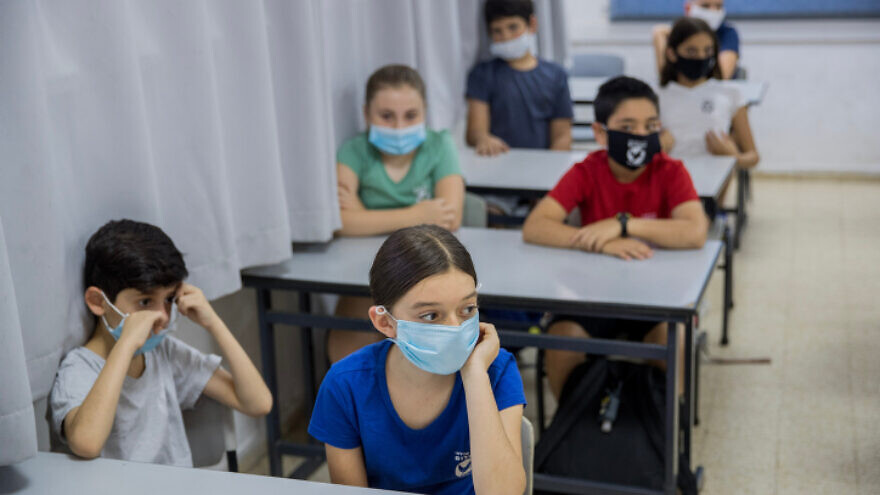 Israeli students at Hashalom School in Mevaseret Zion, a suburb of Jerusalem, on May 17, 2020. Photo by Yonatan Sindel/Flash90.
Spread the word.
Help JNS grow!
Share now:

(May 17, 2020 / JNS) Approximately 1 million Israeli children returned to their classrooms on Sunday, following a two-month forced hiatus due to the coronavirus outbreak, with the rest of the country’s elementary, middle and high schools slated to resume operations by the end of the week.

Nursery schools, kindergartens and grades one through three, in addition to 11th and 12th grades, began a gradual return to operations last week.

In contrast to the Israeli Health Ministry’s original recommendation, which was implemented last week, the return to school will no longer involve the dividing of classrooms into small “capsules” for social-distancing and hygiene purposes. The directive was canceled in the wake of objections from various municipalities, which pointed out that it entailed the occupation of double the number of classrooms and half the number of pupils attending school simultaneously.

To accommodate the “new normal”—with a steady decline in COVID-19 infection and death rates, alongside concerns of a second outbreak—all students from grade four and up will be required to wear surgical masks throughout the entire school day. In addition, all classroom windows will remain open; breaks between classes will be staggered; and recess will be conducted in shifts. During lunch break, pupils will be required to adhere to the 2 meters (6.6 feet) social-distancing regulation.

According to Israel’s Channel 12, in most schools each pupil will be provided with a large container of hand sanitizer.

Though the move is a relief to most parents, both those returning to jobs at the many offices that have reopened and those who work from home, some are reluctant to send their kids to school this week, as the country is in the middle of a massive heat wave. They cite the all-day face-mask requirement, coupled with the open-window policy, as a cause for concern.

Temperatures across the country reached 35 to 41 degrees Celsius (95 to 105 degrees Fahrenheit) over the weekend, with reports predicting similar weather for the next several days.

To escape the oppressive heat, thousands of Israelis flocked to beaches on Friday and Saturday, flouting the government’s COVID-19 restrictions. An announcement about the reopening of the country’s beaches is expected on Wednesday.

As of Sunday morning, Israel’s coronavirus death toll stood at 268.