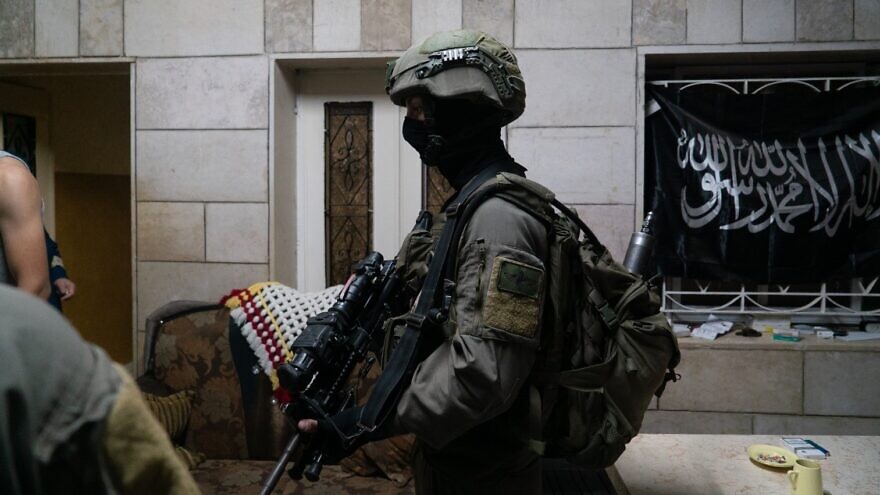 (November 22, 2021 / JNS) The Israel Security Agency (Shin Bet) announced on Monday that it had broken up a major Hamas terror plot and arrested more than 50 operatives of the organization throughout the West Bank. Raids conducted in cooperation with the Israel Defense Forces and Israel Police led to the arrests of more than 50 Hamas operatives, stated the Shin Bet.

“The activity was funded and managed by Hamas senior operatives, headed by Salah al-Arouri, deputy chairman of Hamas and head of the “West Bank arena”—a body located abroad that operates to set in motion Hamas activity in Judea and Samaria, and Jerusalem,” said the Shin Bet in a statement.

Al-Arouri was joined by other coordinators of the terror infrastructure, said the Shin Bet—specifically Zakaria Najib, originally from eastern Jerusalem and one of the kidnappers of Israel Defense Forces’ soldier Nachson Waxman, who was killed in a botched rescue attempt in 1994. Najib was released by Israel in the 2011 Gilad Shalit prisoner exchange.

“In order to carry out the attack, Hijazi met with senior representatives of the [Hamas] overseas headquarters and received instructions on carrying out the attacks. He was also offered $1 million by al-Arouri if he implements a kidnapping attack. Later, he received hundreds of thousands of shekels for starting activities,” said the statement.

A senior Shin Bet source said the disruption of a “broad, significant, dangerous terror cell” prevented a series of severe attacks. Its objective was to “undermine regional stability while creating a heavy price tag for local [Palestinian] residents,” said the source.