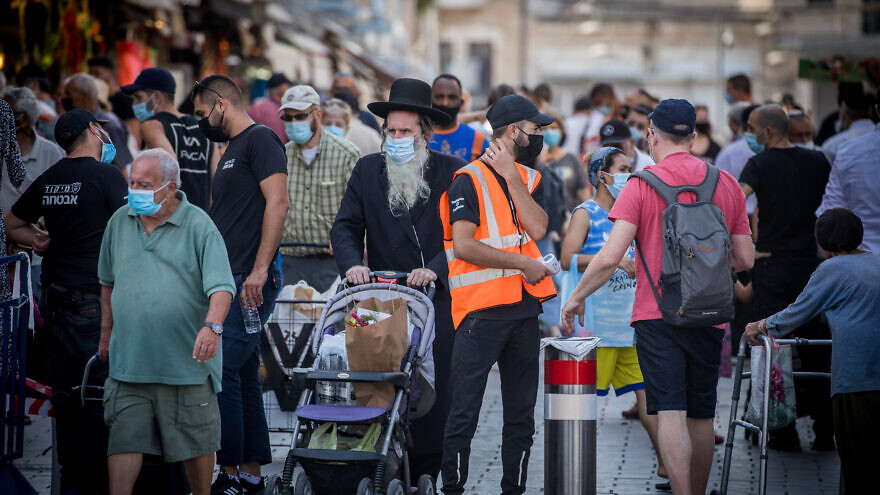 (September 18, 2020 / Israel Hayom) On Rosh Hashanah eve, as Israelis were bracing for a second nationwide lockdown due to the coronavirus pandemic, the Health Ministry on Friday morning said it had registered 5,238 new cases in the past 24 hours.

The number of COVID-19 patients in serious condition rose to 577, the highest figure since the outbreak of the pandemic in March. Out of the 577, there are currently 153 individuals on artificial respirators—the highest figure to date as well.

The Jewish state has significantly increased the number of screening tests in recent weeks. In the last three days, laboratories conducted more than 50,000 tests daily, reaching 56,986 on Thursday.

The positive test ratio on Thursday stood at a relatively high 9.2 percent.

Israel is facing a national three-week lockdown slated to go into effect at 2 p.m. Friday (Israel time), as the government seeks to curtail the spread of the virus that has continuously grown in numbers.

One change the government has already made to its lockdown protocols is that people will be allowed to leave their homes up to 1,000 yards instead of the previously stipulated 500 yards.

Gatherings were limited to up to 10 people in a closed public space and up to 20 people in an open space. A driver can drive two people if they are not from the same household.

In a press conference on Thursday night, Israeli Prime Minister Benjamin Netanyahu asked citizens to make an extra effort to ensure the lockdown produces the desired results by bringing down community spread of the coronavirus.

Netanyahu warned that another layer of restrictions could be added next week in the wake of criticism that there were too many exceptions catering to specific interest groups.

The current lockdown, approved earlier this week, is to last until early October at least.

“This lockdown is important, and it is essential; we will go through this together,” Netanyahu said in a special televised address.

He added that his government would soon pass an additional stimulus package aimed at encouraging businesses to keep employees and help individuals make ends meet despite the expected loss in income, including through government-backed loans.

“I suspect all countries will ultimately have to decide whether to go into lockdown or not, and they will most likely have to do so as a last resort,” he stated. “As I have said before, we will lift some of the measures when morbidity drops, and increase it when it spikes. One of the main criteria is the health-care system and how overwhelmed it is, and that is why we are imposing the lockdown tomorrow.”

Netanyahu said that the lockdown could become much more restrictive because of the data he had received Thursday. “I held a long discussion with the health minister [Yuli Edelstein], with the coronavirus commissioner [Ronni Gamzu] and with various experts … and following that meeting I have come to the conclusion that under the current infection rates, as per the recommendations of many, there may not be any other option but to add more restrictions. My job, as prime minister, is not just to take care of people’s health, but to take care of those who are sick.”

According to predictions published by researchers from the Hebrew University of Jerusalem, the number of deaths as a result of the coronavirus could increase by 1,000 in the coming weeks and reach 2,500 overall since the outbreak of the pandemic several months ago. The report noted that its figures were largely dependent on the degree to which citizens uphold safety directives.