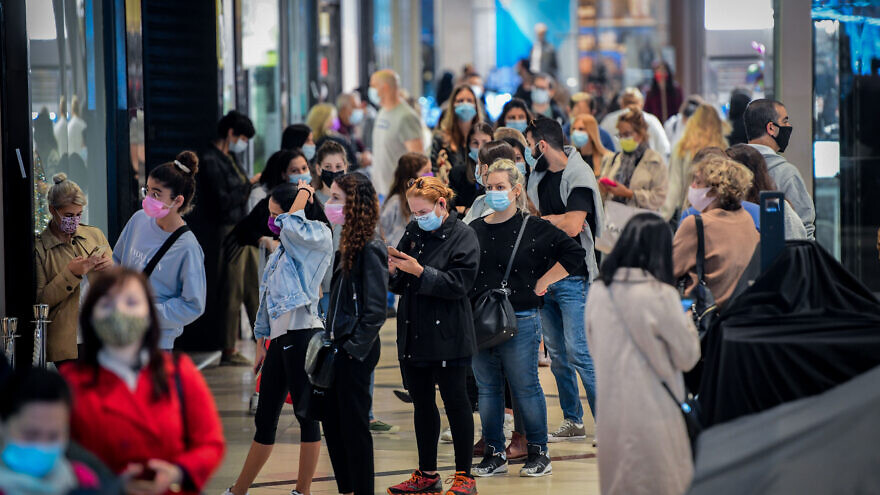 Israelis shop at the Ayalon Mall in Ramat Gan after it reopened, along with other malls and retail stores in the country, on Nov. 27, 2020. Photo by Avshalom Sassoni/Flash90.
Spread the word.
Help JNS grow!
Share now:

(November 27, 2020 / Israel Hayom) A number of shopping malls in Israel that opened on Friday under a pilot program to see if a set of regulations designed to keep them from becoming hotspots of coronavirus infection would be effective saw heavy customer traffic and long lines, as Israelis anxious for a retail fix rushed to take advantage of sales on Black Friday.

The malls chosen to open, in addition to three owned by the Ofer Group and three owned by the Azrieli Group, were selected in a lottery. Those that were approved under the COVID pilot include Big Fashion in Beit Shemesh; Center 1 in Jerusalem; the Arad Mall, M Haderech Mall, Shivat Hakochavim in Herzliya; Sharonim Mall in Hod Hasharon; Lev Hamifratz in Haifa; Arena in Nahariya; and the Mivne Nof Hagalil shopping center.

Most of the stores in the Ayalon Mall in Ramat Gan were open, except for those owned by Zara Group, which are scheduled to resume operations on Sunday. Stores were only allowed to admit up to 10 customers at once, which created long lines outside many retailers, including Fox, H&M and even Roladin, which sells sweet (and savory) treats, not clothing or electronics.

All were staffed by designed “COVID patrols” charged with making sure customers maintained social distancing.

Sarit Ben Moshe of Holon was so eager to shop that she arrived at the Ayalon Mall at 7 a.m.

“I got to the mall with my daughter, and we bought pajamas, winter clothing and presents. At 6:30 a.m. I got an update about which malls had been selected to open. No mall around Holon was chosen in the lottery, so we came here. … I’m happy to go back to the mall after so long. It’s good for the spirit, too,” said Ben Moshe.

However, she was unimpressed by the Black Friday offers: “The sales were nothing special, but it’s important to support Israeli businesses,” she said.

Or Yitzhaki, who came to the mall with a friend to buy clothes at Black Friday discounts, wasn’t impressed by the sales, either.

“I waited a long time to go shopping, and to tell you the truth, most of the deals are disappointing. … There are better deals online,” he said. “Still, I have to say that they’re really following the [COVID] regulations. There are inspectors here. It’s fun to see people, finally.”

Bar Ifergan, who was last in line outside the Swedish clothing retailer H&M, said, “I don’t mind waiting. I’ve waited for this. H&M doesn’t have a site, and I’ve waited to buy clothes a long time.”