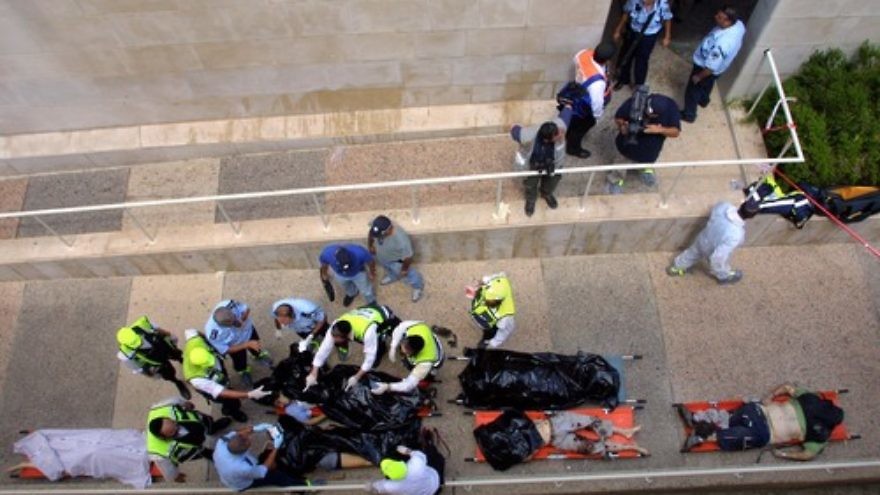 Bodies are taken away following an explosion at the cafeteria of Jerusalem's Hebrew University on July 31, 2002, during the years of the Second Intifada. Hamas took responsibility for the bombing, which killed seven people and wounded 70. Photo by Flash90.
Spread the word.
Help JNS grow!
Share now:

(June 22, 2022 / JNS) The Jerusalem District Court ordered the Palestinian Authority to pay 130 million shekels ($37.5 million) in compensation to 32 Israeli families that lost members to terror attacks during the Second Intifada (2000 to 2005), according to a report by Ynet.

Tuesday’s ruling comes after the Israeli Supreme Court ruled in April that the P.A.’s practice of paying security prisoners and their families constituted “approval” of terror attacks against Israelis, meaning that the P.A. can be legally sued for compensation.

Attorneys from the Shurat HaDin NGO who represented the families thanked the court for the ruling, which they said provided justice for the families of the victims, but added that they intend to appeal the ruling to seek greater compensation, the report stated.

Nitsana Darshan-Leitner, president of Shurat HaDin, tweeted on Wednesday: “Another huge victory of ours over terror.”

The ruling, she said, “forms a precedent, and it is the highest that a court has ruled on in a lawsuit ruling against the Palestinian Authority.”