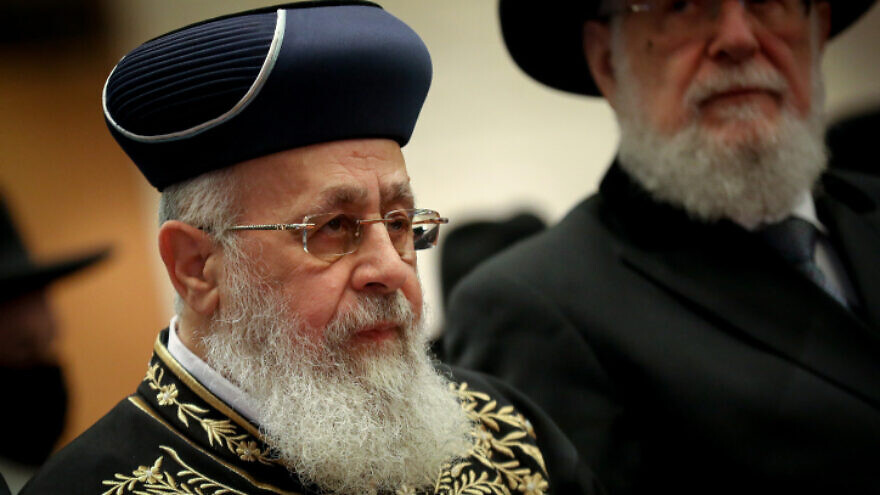 (November 15, 2022 / Israel Hayom) Prominent Jewish voices in the United States have voiced concern over the latest efforts by Sephardi Chief Rabbi Yitzhak Yosef and Otzma Yehudit leader Itamar Ben-Gvir to roll back the status of Reform conversions, and specifically to undo the High Court of Justice’s 2021 decision recognizing non-Orthodox conversions for the purposes of immigration under the Law of Return.

“This has never happened, that the High Court has a say. There has never been a government like this, with 32 religious MKs, but this is an opportunity to rectify the law of ‘Who is a Jew,'” said Yosef during a recent Torah lecture.

The next morning, Ben-Gvir made an announcement that he would promote the inclusion of the term “conversion according to halacha [Jewish law]” in the Official Gazette, to prevent recognition of Reform conversions as part of the aliyah process. This, it seems, is the start of another difficult battle in the conversion saga that has been going on for decades.

A conversion law was never enacted in the State of Israel, despite the fact that it is an acute issue for the future of the Jewish People. Regarding the Law of Return, then-Prime Minister David Ben-Gurion decided with the establishment of the Jewish state that: “Whoever was born to a Jewish mother and is not of another religion, or whoever converted according to Jewish law,” will be considered a Jew. In 1970 it was ruled that the children and grandchildren of a Jewish person could immigrate to Israel by virtue of the Law of Return. During those years, many discussions were held in order to determine who is a Jew, and how to define a person who converts by a non-Orthodox conversion process, but to no avail.
In March 2021, the High Court of Justice ruled that those who converted via Reform or Conservative ceremonies would be recognized as Jews for the purposes of the Law of Return. This ruling enraged many Orthodox Jews, and this is what the haredi and religious MKs currently wish to rectify.

“Conversion is a halachic term,” said Rabbi Yaakov Ariel, former chief rabbi of Ramat Gan and one of the most prominent rabbis in the religious-Zionist community. “Only one who knows halacha can convert a person, and one who does not know the rules of conversion has not converted said person. The outside world should not be interfering in this matter. Why is the world interfering in something they do not know anything about? Conversion is a halachic matter. Period.”

Rabbi Ariel also supports the opinion of the chief rabbi, and claims that the secular court should not be dealing with conversions.

“The court does not understand Jewish law and this is not its jurisdiction. If they were judges who understand halachah, this would be another matter, but this is not the case, and they cannot interfere here,” he said.

“The big question is, what is conversion according to Jewish law? Is a conversion by a private court considered a valid conversion? I am not sure that Ben-Gvir would have agreed that certain Orthodox sectors would be defined as converted by Jewish law. In general, I believe that we have to avoid like fire situations in which judges are deciding what halachah is and what it is not,” said Tani Frank, head of the Shalom Hartman Institute’s Center for Judaism and State Policy.

“The direction that the haredi sectors are taking seems to be a national conversion law, that was halted in 2017 by [then-Defense Minister Avigdor] Lieberman and [then-Education Minister Naftali Bennet], according to which all conversions are state supported—and that there would not be any Reform or Conservative conversions. This will infuriate the non-Orthodox movements, but it will put everyone through an equal procedure—both the private Orthodox conversions, and those that are not.”

One thing is totally clear—that the conversions issue is exceptionally volatile to Jews in the Diaspora, and has the potential to intensify the rift between Israel and other countries around the world, because unlike Israel, the Reform Movement represents the majority of Jews there. Andrew Rehfeld, president of the International Hebrew Union College, the Reform Movement’s college for Jewish studies, says that there is nothing to get upset about as long as these are only words, but that the trend is more worrying. These days he is in Israel, inaugurating a new campus of the Seminar in Jerusalem, and participating in an ordination ceremony certifying five new Reform rabbis.

“When we talk about supporting Israel, we are talking about three basic values—the safety, the pluralistic prosperity and the sovereignty of the Jewish people, which puts democratic law and justice as a priority,” he said. “Such suggestions are the total opposite of these principles, a radical approach of Zionism that puts the Jewish People in a much riskier position and limits the options on the agenda. I believe that this is a threat to the Jewish state.

“Whoever delegitimizes the actions of thousands of Reform communities in Israel and around the world, threatens our safety and harms the Jewish People. They are taking an anti-Zionist position. This is not the Zionism that I know. If they promote these moves, they will tear Israel from the Diaspora. We are not going anywhere, but we have to work harder to strengthen the Jewish People.”