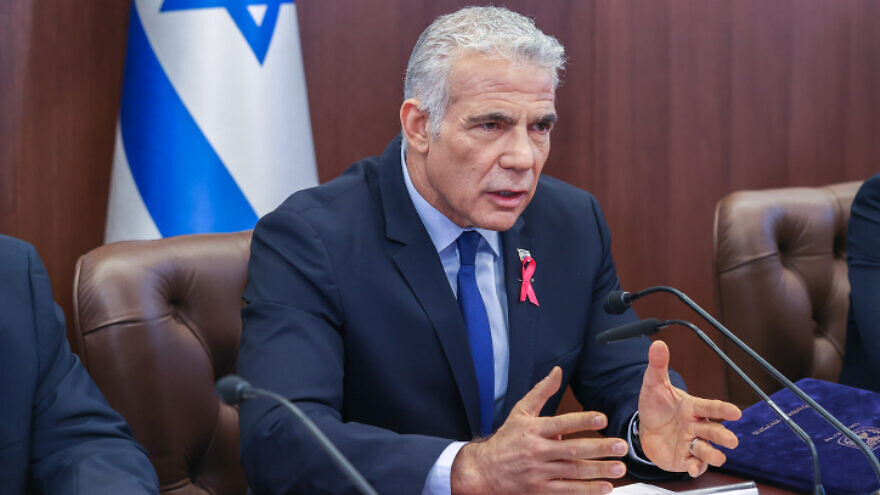 On Tuesday, Beirut nixed the draft proposal and sent U.S. officials “amendments” to the text, prompting a U.S. official to tell Israeli media the suggested modifications did not include a “poison pill” that could torpedo the initiative.

Nevertheless, Lapid, who initially voiced approval for the deal, instructed Israeli negotiators who are in touch with United States mediator and special energy envoy Amos Hochstein to oppose the additions.

“Prime Minister Lapid made it clear that Israel will not compromise on its security and economic interests in any manner, even if that means that there will not be an agreement soon,” said the source.

“Israel will produce [gas] from the Karish platform as soon as this is possible. If Hezbollah or anyone else attempts to harm the Karish rig or threaten us—the negotiations over the maritime border will cease immediately, and Hassan Nasrallah will have to explain to Lebanon’s citizens why they don’t have a gas rig or an economic future,” the source added.

The deal draws a border between the two countries’ exclusive economic zones (EEZs) based on a boundary known as Line 23, and awards a disputed area of around 840 square kilometers (9,042 square feet) to Lebanon, while recognizing Israel’s claim to royalties from the section of the Qana gas field that extends into Israel’s EEZ.

The development follows revelations that Jerusalem’s lead negotiator in the U.S.-mediated talks with Beirut quit last week due to disagreements with the Prime Minister’s Office (PMO) over how the process was being handled.

Ehud Adiri reportedly resigned over opposition to the terms of the agreement and the manner in which National Security Adviser Eyal Hulata conducted the negotiations after their purview was transferred to the PMO.

Israeli opposition leader Benjamin Netanyahu has accused Lapid of caving in to Hezbollah with regard to the potential agreement.

In response, Lapid tweeted that in the prospective deal “Israel receives 100% of its security needs, 100% of the Karish (gas) reservoir and even some of the earnings from the Lebanese reservoir.”

Lapid wrote in reference to Netanyahu that he “hasn’t seen the agreement” and that “I understand it pains you that you didn’t succeed in achieving a deal [when you were premier], but that is no reason to join Nasrallah’s propaganda campaign.”

Israel recently set up a rig at Karish, where gas was reportedly set to begin flowing in September but was delayed in order to give the talks more time, and amid repeated threats of war by Nasrallah.

The Israel Defense Forces has been on high alert amid concerns that Hezbollah could launch an attack on Karish, after threatening to fire missiles at it if Israel extracts gas before an agreement with Lebanon is reached.

“We’re following up on all gas fields across Palestine,” said Nasrallah in August. “If you don’t allow firms to extract gas, we’ll flip the table on the entire world. Going to war would be more honorable if the other choice is for the Lebanese to starve.”

On July 2, Hezbollah sent three unmanned aerial vehicles in the direction of the Karish platform, all of which were intercepted by the IDF.