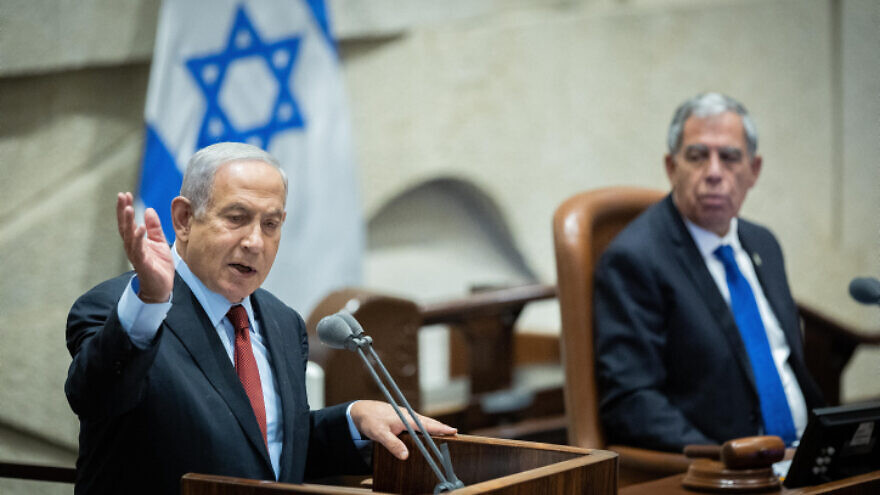 Netanyahu argued that Lapid was attempting to “pull a fast one” on the Israeli public by forging ahead with the accord without a public referendum, as is required by Israeli law before the government can cede sovereign territory.

In the event, Netanyahu said that he would not recognize the prospective deal as legally binding.

Israel Hayom reported on Sunday that Lapid intends to invoke a special article in the government’s bylaws that will allow the details of the agreement to remain confidential.

Addressing the weekly Cabinet meeting on Sunday morning, the Israeli premier said that Jerusalem and Beirut were discussing the “final details” of the agreement, though he noted that “it is not yet possible to praise a done deal.”

The deal, he said, “as we have demanded from the start … safeguards Israel’s full security-diplomatic interests, as well as our economic interests.”

The United States on Saturday submitted to Lebanese President Michel Aoun a formal proposal to end the dispute, which has been ongoing for more than a decade.

Under the terms of the emerging accord, the Jewish state would be free to exploit the Karish natural gas field, said Lapid. “Money will flow into the state’s coffers and our energy independence will be secured. This deal strengthens Israel’s security and Israel’s economy,” he added.

The proposal will reportedly allow Lebanon to develop the contested Qana gas field, while Israel’s claims over the Karish deposit would be recognized.

Israel recently set up a rig at Karish, where gas was reportedly set to begin flowing in September but was delayed in order to give the talks more time, and amid repeated threats of war by Nasrallah.

Professor Eugene Kontorovich, director of International Law at the Jerusalem-based Kohelet Policy Forum, told JNS that the proposed natural gas agreement between Israel and Lebanon represents “a total capitulation to Hezbollah, and a transfer of sovereign Israeli territory to an Iranian puppet state.”

“As the people of Iran fight for their freedom, Israel is surrendering to Tehran via Beirut without even getting an acknowledgement of its existence in return, let alone peace,” he said. “After being proposed and rejected a decade ago, the deal is being rammed through, just weeks before the Israeli elections—in violation of Israeli constitutional rules—because the Biden administration and Hezbollah understand the desperation and weakness of the Lapid-Bennett government.”