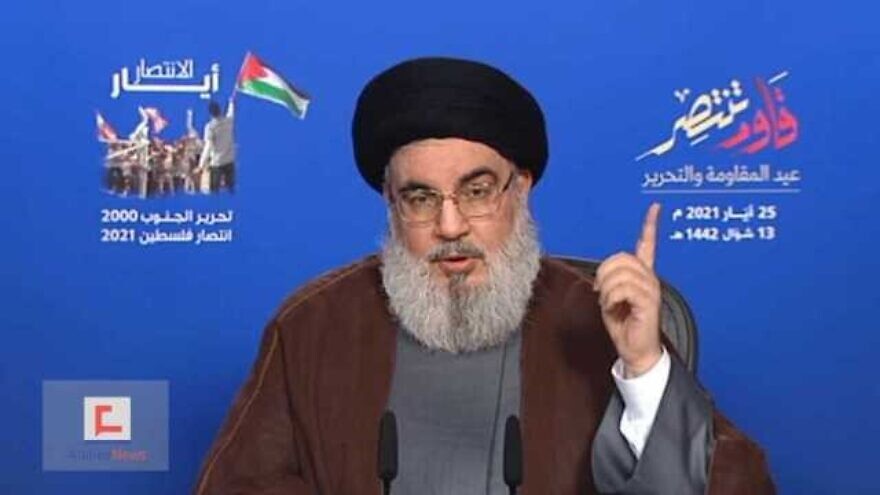 The observers noted that even if the Iranian-backed terror organization is not intending to start an all-out war, the smallest miscalculation could easily spiral into an out-of-control confrontation.

This comes as Lebanese officials have sounded upbeat about the chances of U.S.-mediated indirect maritime border talks between Jerusalem and Beirut leading to an agreement that would grant Lebanon its own natural gas reservoir alongside Israel’s Karish field.

Hezbollah, however, has for months threatened to initiate a military conflict if gas begins to flow from Karish before a deal is reached, with Nasrallah stating in August: “If the Lebanese state is not given what it wants, we will be heading to an escalation.”

Nasrallah said this would happen even in the event a new nuclear accord is forged between world powers and Tehran.

On Thursday, Israeli Defense Minister Benny Gantz responded, warning, “If Nasrallah wants to disrupt negotiations with Lebanon over the maritime border and tries to hit the Karish gas rig, he’s welcome to do so. But Lebanon will pay the price.”

Col. (res.) Dr. Eran Lerman, vice president of the Jerusalem Institute for Strategy and Security and a former deputy director for foreign policy and international affairs at the Israeli National Security Council, said that Nasrallah’s actions are driven by a sense of vulnerability.

“I think Hezbollah views one thing above all else as the greatest threat to its legitimacy: namely, that the Lebanese people, insofar as this applies to such a torn society, would learn that Israel does not mean them harm and never did, and the whole ‘defender of Lebanon’ [pose] is a sham,” Lerman told JNS.

“Hence the need for Hezbollah to interject its threats into the negotiations,” he added.

“There may well also be an Iranian interest in disrupting the entire effort,” Lerman continued. “Once the Lebanese have a real stake in stability, it would be even more difficult for Nasrallah to drag Lebanon into the abyss in response to an Israeli (or American) airstrike in Iran,” he said.

“Ironically, this means that a generous Israeli offer via U.S. mediator Amos Hochstein could expose the basic identity of Hezbollah: Are they Lebanese, or Iranian stooges? The results are volatile and unpredictable, thus the perceived need in the [Israel Defense Forces] Northern Command to be ready for all eventualities,” Lerman said.

Professor Uzi Rabi, director of the Moshe Dayan Center for Middle Eastern and African Studies at Tel Aviv University, said that while Tehran is definitely fomenting the current tensions, Hezbollah has “attempted to take ownership of the gas issue” because the terror group views the matter as a win-win proposition.

“If there is no agreement, Hezbollah will present this as the result of the firm stance it took and that Israel is, as usual, rejecting Hezbollah’s ‘defense’ of Lebanon,” said Rabi.

“If there is a deal, then Hezbollah will glorify this and exploit it for internal Lebanese needs; in other words, to promote its political status and legitimacy. This, after Hezbollah has been accused of being the main instigator of Lebanon’s bitter fate,” he added.

While Rabi believes there is only a small chance that Hezbollah will launch a war against Israel, he said that Jerusalem “does not have the luxury” of ignoring Nasrallah’s words.

“The fact is that Hezbollah is provoking and creating all sorts of pinpoint operations that provide a window into its changing modus operandi,” he said. “The problem with the reality being created is its explosiveness, meaning that a small thing can spin out of the control of those who planned it and turn into a major event.”