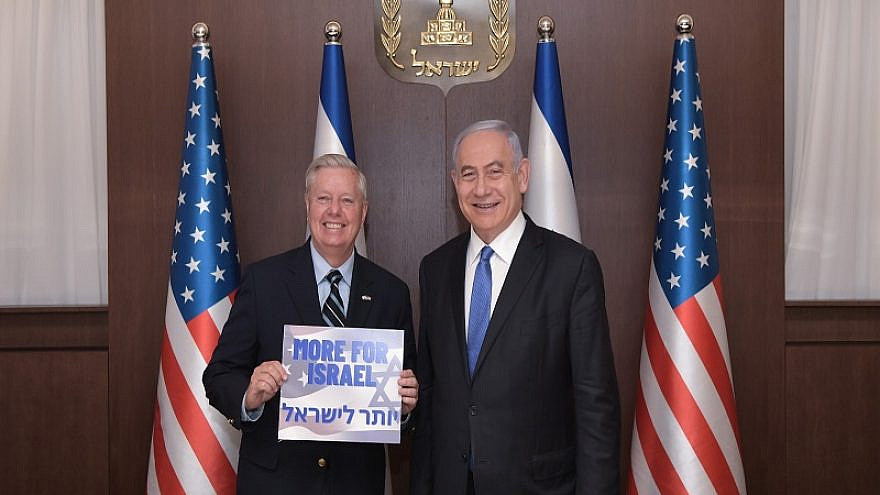 (June 1, 2021 / JNS) During a meeting in Jerusalem on Monday with Israeli Prime Minister Benjamin Netanyahu, visiting Sen. Lindsey Graham (R-S.C.) described the country as “the eyes and ears of America,” and said that “nobody does more to protect America from radical Islam than our friends in Israel.”

“To every American, what happens with Iran matters not only to America but to the world,” he said. “The worst possible outcome for the world is to allow the Iranian regime to acquire nuclear capability.”

He also noted that America’s Arab allies “feel far more threatened by Iran than they do Israel.”

Graham said that he hoped to “find an alternative” to the Joint Comprehensive Plan of Action (JCPOA) from which former U.S. President Donald Trump withdrew in 2018—one “that would allow for nuclear power but not create a nuclear arms race through enrichment, and that’s the existential threat to the State of Israel and the world writ large.”

Netanyahu thanked Graham for his efforts on behalf of Israel.

“No one has done more for Israel than you, Senator Lindsey Graham, a stalwart champion of our alliance and we have no better friend. I want to thank you for everything you’ve been doing over the years on our defenses, our security, on Iran. You’ve been a tremendous friend and a tremendous ally,” he said.

Graham’s remarks, which he ended by promising more U.S. support for Israel in the “coming days and weeks,” come on the heels of a fifth round of talks in Vienna between Iran and world powers.

Iranian Deputy Foreign Minister Abbas Araghchi, Tehran’s delegate to the talks, told Iranian state TV last Tuesday that he hoped the current round would be the last, after “good progress” was made in the previous four, AP reported.