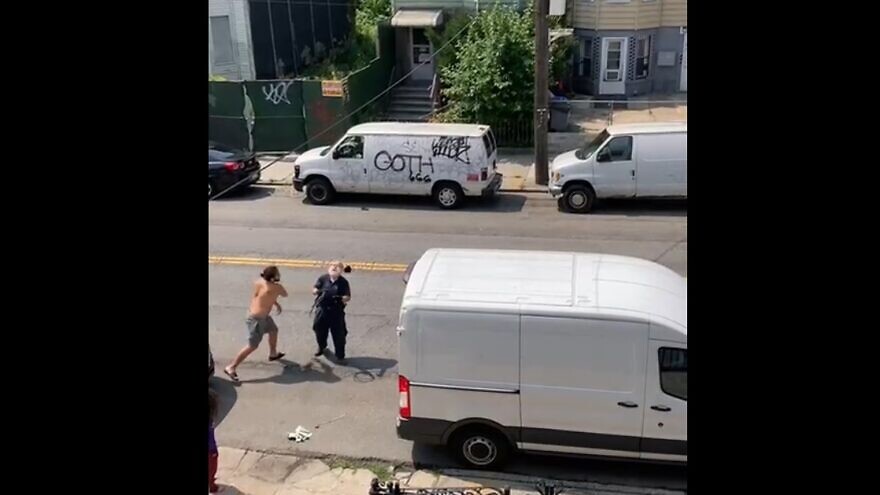 A Jewish plumber was hit in the face by a younger man, who then fled the scene, in Brooklyn, N.Y., on Aug. 11, 2021. Source: Screenshot.
Spread the word.
Help JNS grow!
Share now:

(August 13, 2021 / JNS) The New York Police Department is searching for a man who was caught on camera assaulting a Jewish plumber in Brooklyn, N.Y., whose van was partially blocking a driveway in Borough Park on Wednesday.

Video taken at the scene showed the driver loading equipment into his van as he was approached by a shirtless man, and verbally and physically abused.

A woman at first demanded that the plumber move his vehicle, with the Jewish man replying that he would do so when a car needed to leave the driveway, according to BoroPark24.

The shirtless younger man confronted the older van owner, telling him to “get off [his] property” and “get the f**k out of here.” He also yelled at the victim, “You disrespected my woman!” to which the Jewish man said, “I told her I’m gonna move.”

“You told her no!” the assailant replied before slapping the plumber so hard he was knocked to the ground.

The publication said the victim briefly lost consciousness after being hit, which caused bruising under his eye and a cut on his mouth.

The New York Police Department and Borough Park Shomrim arrived at the scene, but the perpetrator, whose address is known by authorities, had already fled.

“This kind of vicious act of violence won’t be tolerated in our city,” New York City Mayor Bill de Blasio posted on Twitter. “The NYPD is investigating and make no mistake, the perpetrator WILL be brought to justice. If you have any information, please contact @NYPDTips immediately.”