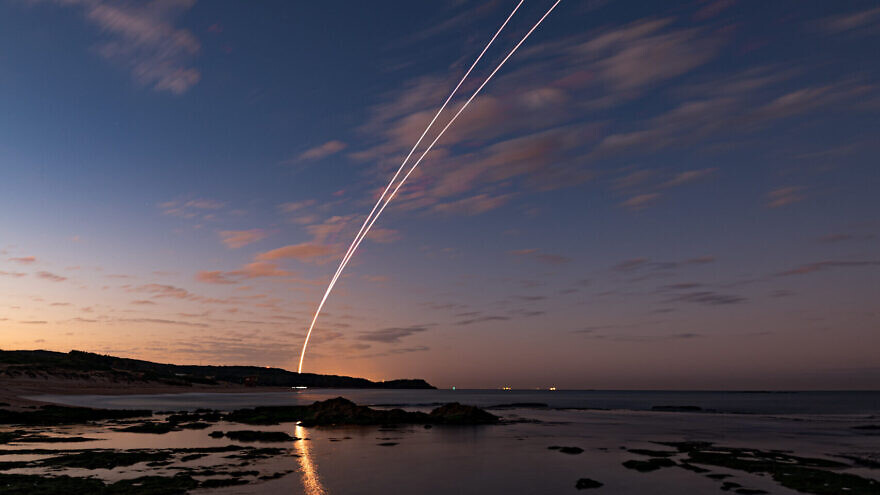 (May 27, 2022 / JNS) An arms race between Israel’s defense establishment and the Iranian-led radical axis in the Middle East is underway. A key aspect of that race is the cat-and-mouse battle of wits between the developers of Israeli air-defense systems and the builders of increasingly dangerous missiles, rockets and unmanned aerial vehicles.

The firepower inventory of Hezbollah and Iran, and to a lesser extent, Hamas, includes projectiles with increasingly large warheads and a growing number of accurate, guided projectiles as well, such as the Fateh 110 surface-to-surface missile, which Hezbollah is equipped with, or Iran’s Shahab 3 missile, which can reach Israel from Iranian territory.

Iran’s military industry is churning out increasingly sophisticated, long-range unmanned aerial vehicles, such as the Shahed 197 UAV, which has an estimated range of some 2,000 kilometers. Iran is both arming itself and its proxies with such capabilities.

Ultimately, the Iranian strategy is to surround Israel with as many “fire bases” as it can—from Lebanon, Syria, Iraq, the Gaza Strip, and in the future, from the West Bank, as well as from Iran itself.

On the other side of the arms race, Israel is boosting its air attack, ground maneuvering, firepower and intelligence capabilities to take on this threat. Defensively, Israel is also working around the clock to boost its world-leading multi-tier air-defense systems.

As engineers from defense industries and the Israeli Air Force study intelligence of new threats, they respond by boosting the detection and interception capabilities of existing systems while working to bring new interception technologies, like lasers, online as well.

The highest-altitude interception system currently standing on guard over Israel is the Israel Aerospace Industries-made Arrow 3 system. This system has attracted the attention of Germany, which has shown a serious interest in purchasing it, as part of the fallout from Russia’s invasion of Ukraine and a new urgency in Europe to beef up air defenses.

Arrow 3 launches an interceptor into space that can maneuver and destroy long-range ballistic missiles before they can re-enter Earth’s atmosphere.

In January, the Defense Ministry’s Missile Defense Organization, Israel Aerospace Industries and the Israel Defense Forces held an important live-fire trial of the Arrow 3, during which time the system’s radar detected a mock threat and sent target data to a fire control center, which analyzed the figures and planned an interception route. Two Arrow 3 interceptors were then launched to complete the mission.

Elbit System developed the Arrow 3’s fire control center, while American aerospace giant Boeing, coupled with the Israeli Tomer and Rafael defense companies, are involved in the development and production of the interceptors. Rafael also develops targets for live-fire trials. 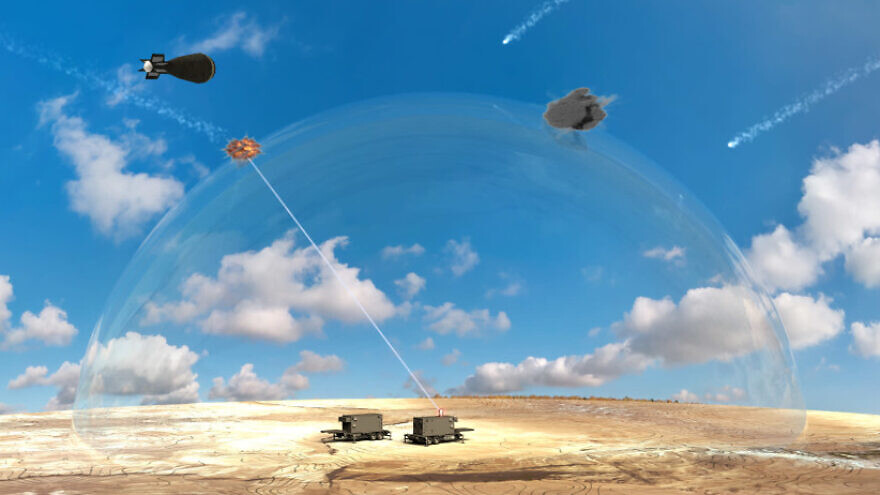 The logic of investing this level of resources in air defenses is based on the concept that the better Israel can defend its home front, cities, population and strategic sites against the worst of the damage of enemy fire, the more this will enable an effective offensive effort.

The IDF’s General Staff views with great importance the need to continually upgrade and improve aerial defenses, and such trials are designed to “stress test” the system against new kinds of threats.

A month after the January trial was held, the Israel Missile Defense Organization released a statement saying that it was, together with the Pentagon’s Missile Defense Agency, commencing work to develop Arrow 4—Arrow 3’s successor.

Defense officials describe Arrow 4 as a technological and operational leap ahead that will prepare Israel for the future battlefield and against constantly evolving threats in the region.

It is planned to be the next generation of interceptors with unprecedented capabilities—interceptors that can maneuver both in space and within the planet’s atmosphere. The system is designed to replace the Arrow 2 interceptors in the coming years, which operate in the upper atmosphere.

Arrow 2 has been operational since the year 2000, while Arrow 3 became operational in 2017.

The arrival of precision-guided missile threats means that attackers have a significantly higher chance of striking targets in Israel, sparking the development of many such upgrades. 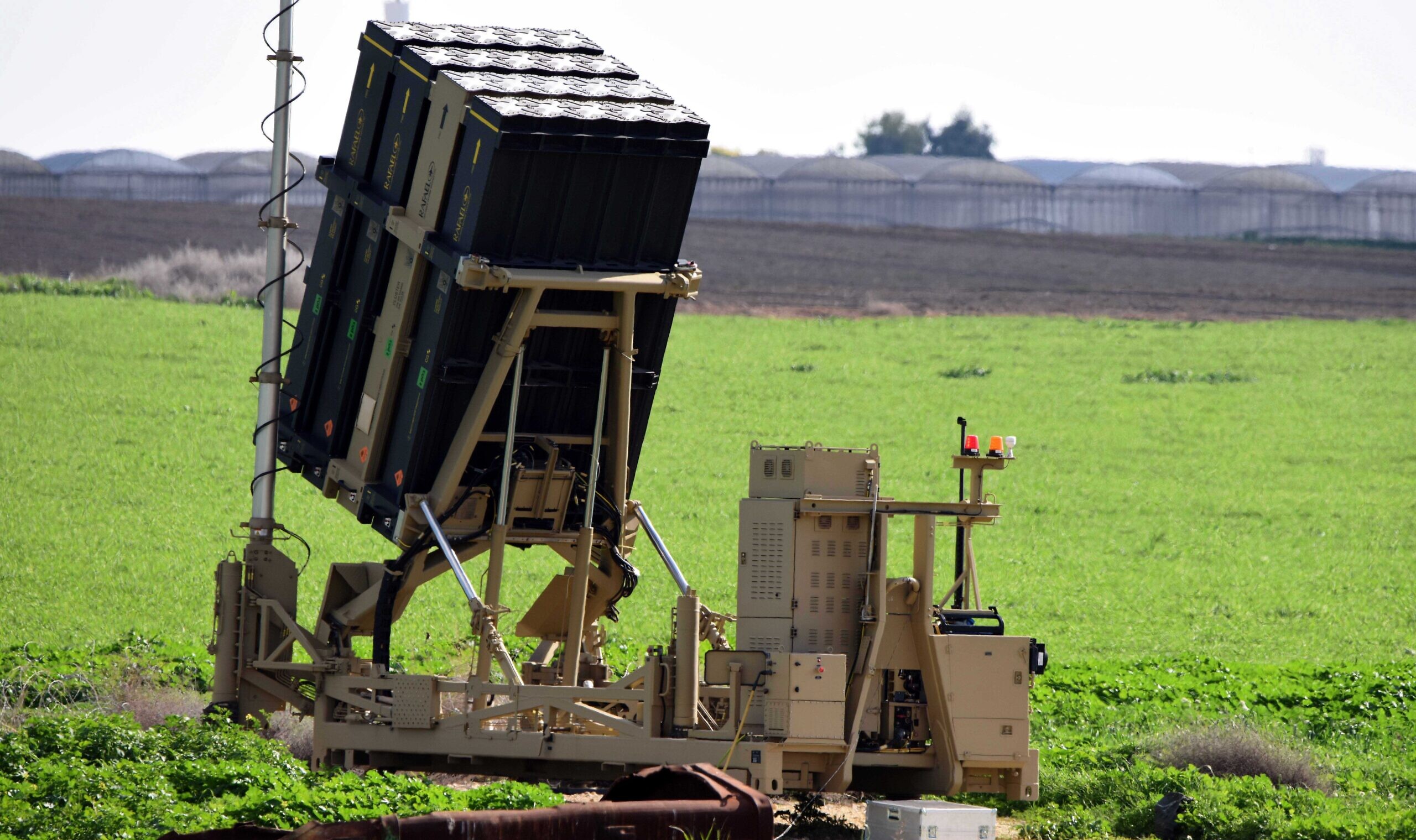 An Iron Dome battery near the southern Israeli town of Netivot. Photo by Flash90.

The next layer of Israeli air defenses is David’s Sling, made by Rafael. Operational since 2017, this system covers the intermediate air defense layer—underneath the coverage that the Arrow systems provide and over the area that Iron Dome, the system below it, operates.

The system is designed to shoot down short-range ballistic missiles; heavy mid-range artillery rockets, which can strike deep in Israel if fired from Lebanon or Syria; and other types of threats.

The system can hit targets outside of Israel and relies on advanced radars made by Israel Aerospace Industries’s subsidiary, Elta. It fires the Stunner-type interceptor (also known as the SkyCeptor), which is made jointly by Rafael and the U.S. company Raytheon.

Here, too, upgrades occur on a regular basis. In December 2020, for example, trials tested a new version of David’s Sling, assessing it with scenarios that simulate future threats. Engineers used the results of that test to conduct further upgrades.

Israel’s most famous and fourth layer of air defense is the Iron Dome system, also made by Rafael. Since its first historic interception of a Gazan rocket in April 2011, it remains today as the world’s only combat-proven system that can defeat very short-range rockets, artillery, mortars and UAVs. It is also programmed to detect and destroy precision-guided munitions and cruise missiles.

Over the years, Rafael evolved Iron Dome to account for future threats, including broadening the area of coverage and the ability to handle what Rafael describes as high-volume rocket salvos with multiple threats.

Iron Dome has intercepted more than 4,000 enemy rockets and has a 90% effectiveness rate. It is also programmed to allow rockets deemed to be heading to uninhabited areas to continue on their trajectory.

Last but not least, Israel is developing a fifth layer of air defense, in the form of breakthrough laser-interception technology.

In February, Prime Minister Naftali Bennett said that the laser system will first be deployed in an experimental manner within about a year—first in southern Israel—before going fully operational.

“This will allow us, in the medium to long term, to surround Israel with a laser wall that will protect us from missiles, rockets, unmanned aerial vehicles (UAVs) and other threats, and in fact take from the enemy the strongest card it has against us,” said Bennett.

Israel is developing three types of laser programs with Rafael and Elbit designed to complement, but not replace, existing defenses. The first is a ground-based laser designed to work in tandem with Iron Dome; the second is a mobile battery that protects military forces in the field; and the third is a revolutionary airborne system that can be installed on UAVs and can intercept threats from above, including over cloud cover.

In July 2021, the Defense Ministry and Elbit equipped a Cessna aircraft flying at 3,000 feet with such a laser and used it to shoot down UAVs, with a 100% success rate.

The cheap-use lasers help compensate for the high price of interceptors, but they cannot replace ground-to-air missiles due to their limitations in fog and cloud, as well as their ability to focus high energy on one target at a time.

As Israel’s enemies set their sights on developing a growing number of precision-guided missiles, the builders of Israel’s multi-layered air defense will study the progress of adversaries and work to stay a step ahead.