news
Sephardi legacy to be emphasized in Murcia region of southern Spain
Eliana RudeeJNS
“We pride ourselves on our history, where we once lived together, and are obligated to rescue the story that was once buried,” said Murcia President Fernando López Miras.
Scroll to view more
Republish this article
723 WORDS
Spread the word.
Help JNS grow!
Share now:

(July 15, 2020 / JNS) What appeared to be a noble effort to discuss bias at Syracuse University ironically turned into a vicious exercise in bias and bigotry as the conversations turned into an anti-Semitic witch hunt. A few students recently created multiple Instagram pages, inviting fellow students and faculty to post stories about incidents of bias on campus. Those who share their stories are permitted to remain anonymous, but the students and professors accused of perpetrating bias are freely and fully identified—and targeted.

One of the pages has warned their viewers to look out for “openly Zionist” professors on campus, naming one professor in particular and attacking students who support the faculty member.

Miriam F. Elman, who teaches about the Israeli-Palestinian conflict, isn’t the only Jewish professor who works at Syracuse, but she is openly Zionist and isn’t afraid to say so. Despite being on leave for the past year, she is being singled out by a malicious and libelous smear campaign on one Instagram page that is demanding that she be fired because of her Zionism and former service in the Israeli Defense Forces. 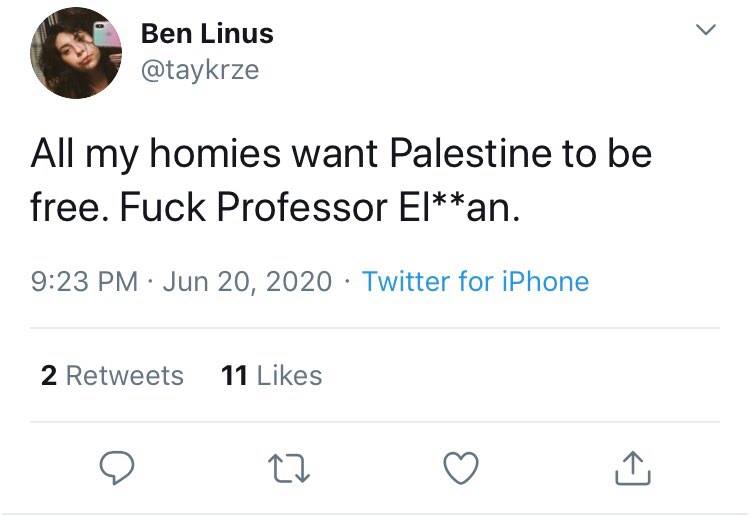 A screenshot of a tweet targeting Syracuse Professor Miriam Elman.

The message for Jewish students is clear: Shed your identity or get canceled. It reeks of pure McCarthyism. The Instagram pages, ironically touting an “inclusive” agenda with words such as “unity,” will tolerate only those Jews who disavow Israel and shed their Zionism, which for most Jews is a major component of their faith.

Adding to the irony is that the Instagram pages have inspired hardcore anti-Semites outside of their group to send hate emails to Elman’s university account. Inexplicably, while the university administration has engaged in public-relations calisthenics for months to show its sensitivity to campus discrimination, they have been silent on this particular brand of hate.

The only group condemning the social-media attacks on Elman, and the Jewish students supportive of her, is Chabad—and now its members are feeling the wrath of the hateful social-media mob. Chabad House members are being called “racist” and “genocidal,” and for my defense of Dr. Elman, I have now received death threats and attacks on my own Jewish identity.

The social-media mob displays a simplistic view of the conflict between Israel and the Palestinians, insisting that people must be virulently anti-Israel to be supportive of the Palestinian people. Of course, they would understand the situation better (and Elman) if they had taken her courses and learned more about what she actually teaches.

They may be surprised to learn that she dives deep into the Palestinian perspective of how Israel was established and explores the many complexities of the conflict. She also assigns readings that include the reasoning behind the BDS (Boycott, Divestment and Sanctions) movement. In fact, Elman’s approach towards the subject has been embraced in anthologies of how to maintain balance in teaching the material. If her teaching reinforces anything, it is the concept that education should not aim to indoctrinate, but to enlighten.

But too many Syracuse University students just want validation of their preconceived pop-culture notions, and too many like-minded faculty members are willing to give it to them. The Instagram campaign reflects the abject intolerance on campus of viewpoints that stray from a myopic, far-left view of the world.

Open discussions are verboten and civil disagreements non-existent. Those who disagree with the mob must be delegitimized, so we have Elman being falsely attacked as an anti-Arab bigot who “promotes the killing of Palestinians.”

Three recent graduates have shared some of the most offensive, anti-Semitic posts, including hosting a livestream titled “Cuse Racists Getting Exposed.” It paints Jewish Holocaust survivors as Nazis who engaged in their own genocide. A host of anti-Semitic tropes are invoked as the livestream aligns the Israeli and Palestinian conflict with a bizarre, conspiracy-laden storyline of brown and black lives being oppressed by white colonists.

The trend is disturbing because an entire community—Jews—are behind excised from campus life and one of the most important discussions on modern American college campuses. To be accepted on campus, a Jew must disavow a major part of his or her identity.

That is called discrimination, and it is coming from people who so adamantly insist that their goal is to eradicate intolerance, hate and prejudice from our society.

Justine Brooke Murray is CAMERA on Campus fellow and a rising senior at Syracuse University.