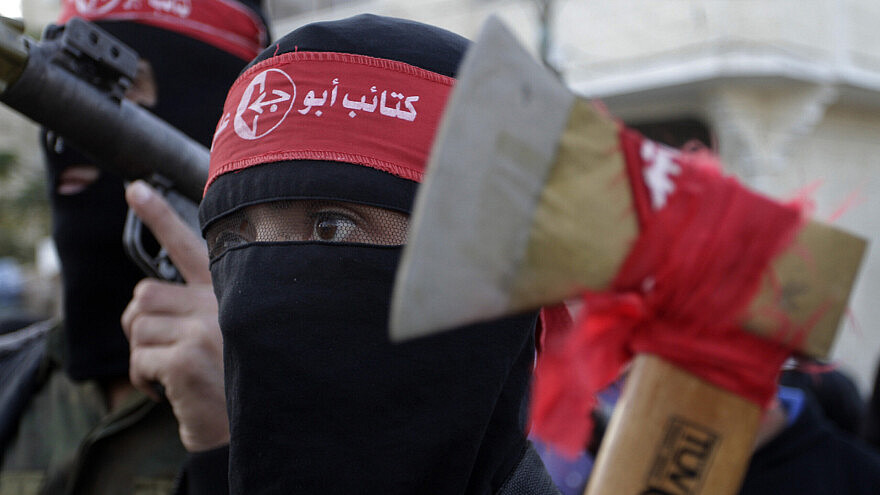 Members of the Popular Front for the Liberation of Palestine (PFLP) take part in a military show in Khan Younis in the southern Gaza Strip to celebrate the 47th anniversary of the group's founding, Dec. 11, 2014. Photo by Abed Rahim Khatib/Flash90.
Spread the word.
Help JNS grow!
Share now:

(October 3, 2022 / JNS) Salah Hamouri, the Palestinian-French lawyer and researcher who went on a hunger strike to protest his imprisonment without charge by Israeli authorities for the past six months, has now been linked to a Palestinian terrorist group.

The Popular Front for the Liberation of Palestine (PFLP), a U.S.- and E.U.-designated terrorist organization, inadvertently revealed on Sept. 25 that Hamouri—a lawyer and field researcher for the Palestinian NGO Addameer—is a member of the PFLP. Until now, Hamouri has strongly disputed such claims when Israel has leveled them.

The information was made public after the PFLP included Hamouri among 30 of its members who were being held in administrative detention and went on a hunger strike last week to pressure Israel into releasing them.

Hamouri has been championed as a human rights defender by numerous NGOs and U.N. officials, including Human Rights Watch, Amnesty International, U.N. Special Rapporteur for the Palestinian Territories Francesca Albanese and more.

Additionally, Hamouri’s case has been addressed by the French government and President Emmanuel Macron.

Prominent media outlets have recently published articles about Hamouri, including one written by Hamouri himself while in detention.

Hamouri has served several prison sentences for his links to the PFLP. He was arrested in 2005 for planning a failed assassination attempt of Israel’s then-Chief Rabbi Ovadia Yosef, and was released in 2011 in the Gilad Shalit prisoner swap.

Hamouri is among the higher-profile members of six Palestinian NGOs that Israel designated as terror proxies of the PFLP in October 2021.