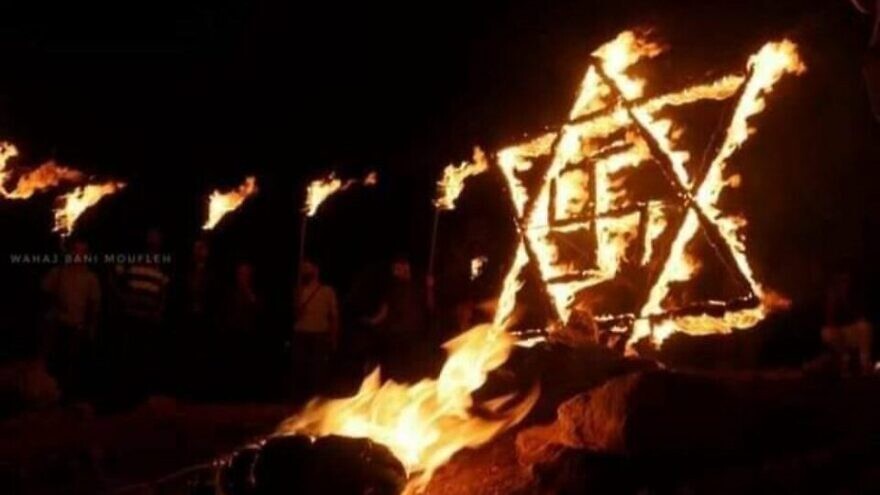 A burning swastika inside a Star of David, erected on Aug. 14, 2021 during riots in the village of Beita in Samaria. Source: Screenshot.
Spread the word.
Help JNS grow!
Share now:

(August 15, 2021 / Israel Hayom) Palestinians erected a burning swastika and Star of David on Saturday night during riots in the village of Beita in Samaria, near the evacuated outpost of Evyatar.

The riots, which have included burning tires and the firing of fireworks, have been taking place every night for months, with the aim of intimidating and eventually causing the complete evacuation of Evyatar.

The outpost was illegally erected in April following the murder of Yehuda Guetta in a terrorist attack at the Tapuach Junction in Samaria. It was evacuated in June but will remain under the control of the Israel Defense Forces until the Civil Administration’s planning committee completes its survey of the land.

If it is determined that the land belongs to the state and isn’t privately owned, the agreement reached between the former residents and the state calls for the establishment of a yeshivah along with living quarters for students and families of the yeshivah team, along with preparations for a permanent settlement.

In July, two structures at the outpost were damaged when Palestinian rioters hurled a firebomb at security forces.