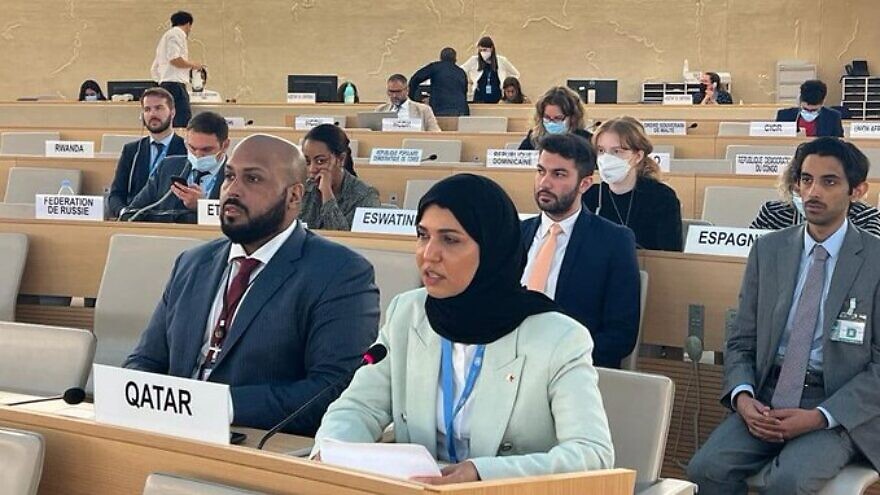 (September 20, 2022 / JNS) The Qatari ambassador to the United Nations, Hend al-Muftah, lost her bid to become chair of the upcoming U.N. Forum on Human Rights, Democracy and the Rule of Law after a watchdog group revealed that she had called Jews “our enemies” and gays “disgusting.”

In a letter sent earlier this month to the president of the U.N. Human Rights Council (HRC), UN Watch called on diplomats to reject al-Muftah’s bid due to her “long record of publishing racist and classically anti-Semitic tropes about Jews, bigoted attacks on gays, and spreading false information and conspiracy theories about Western societies and liberalism.”

In a recent report, UN Watch documented al-Muftah’s numerous anti-Semitic remarks made online, including a Twitter post from 2012 in which she wrote, “The Jews focused their investments in industry and the media, and that is why they dominated, tyrannized and ruled the world.”

In separate Twitter posts, al-Muftah wrote that “Jews are our enemies,” promoted anti-Israel conspiracy theories, called for the “expulsion of Jews from Palestine” and shared an anti-Semitic video in which a child talks about trampling on the corpses of Jews.

In response to her failed bid, UN Watch executive director Hillel Neuer commended UNHRC president Federico Villegas for “doing the right thing and rejecting Qatar’s ambassador of hate,” adding: “Hend Al-Muftah is a rabid antisemite who over a decade has been tweeting vile hate against Jews and gays, while spreading malign conspiracy theories about Western countries.

“She is the last person in the world who should head a UN forum on human rights, democracy and the rule of law,” Neuer said.