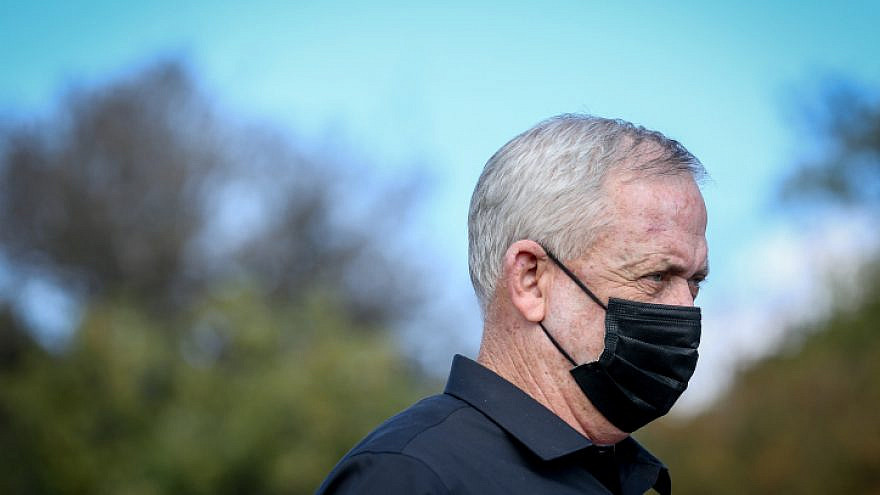 (December 20, 2020 / Israel Hayom) Prominent figures on Israel’s right are furious with Defense Minister Benny Gantz for telling London-based Saudi news outlet Asharq Al-Awsat in a recent interview that he does not envision full regional peace without the Palestinians, and that Jerusalem had enough room to include a future Palestinian capital.

When asked about the status of Jerusalem, Gantz was quoted as saying, “Jerusalem must remain united, but it will include a place for a Palestinian capital. It is a very big city and full of places sacred to us all.”

Jerusalem Affairs and Heritage Minister Rafi Peretz (Jewish Home Party) said in a Twitter post that “united Jerusalem is the eternal capital of the Jewish people, not the capital of anyone else. This is where our forefathers walked and this is where we were created. Gantz, I know you enough to know you believe that, too.”

Knesset Speaker Yariv Levin (Likud) wrote on his Facebook page that Jerusalem was “the heart of the Land of Israel and the State of Israel, for which Jews longed during 2,000 years of exile. We were privileged to unite Jerusalem as the capital of Israel forever. There are not two Jerusalems and no one has the right to question our full right to it. No one has the right to forgo the dream of generations that came true.”

Gantz, a former IDF chief of staff who currently heads the Blue and White Party, was also criticized by the Bithonistim, a group comprised of former military officials, which issued a statement calling on him to resign and retract his remarks.

“Gantz’s statements absolutely contradict Israel’s principles of security and have the potential to cause great harm to its security … In his remarks, Gantz gives up the most basic principle on which Israel was founded—our ability to defend ourselves by ourselves, and instead calls for ‘security guarantees,’ in other words, that someone else will defend our security,” read a statement authored by three retired majors-general (Jerry Gershon, Gershon Hacohen and Danny Biton) and signed by a number of retired brigadiers-general and some 1,500 members of the movement.

Gantz told Asharq Al-Awsat: “The process with the Arab world is a true, great opportunity. Because I want to reach an agreement with the Palestinians, I am sure that without them, there will be no full, comprehensive peace. I call on them to cooperate with me and with the Arab partner states so that they will have a place of honor in the new peace process.”

Gantz was asked if he was willing to “pay the price for peace,” and if it was possible to discuss “an end to the occupation and the establishment of an independent Palestinian state along the 1967 borders, with an exchange of territories and a solution to all the core issues [of the conflict], such as Jerusalem and right of return for Palestinian refugees,” or whether the “old thinking” was still in place.

Gantz, who is also Israel’s alternate prime minister, replied that “the Palestinians want and deserve an entity in which they will live independently.”

When asked if he was referring to a state, Gantz said, “Let them call it what they want—a state or an empire. They have a right to feel independent and have their own capital and a solution to all the issues. We must speak in a new, contemporary language about ways to a solution, not stick to the traditional discourse. For our part, we want to separate from them and their promises of our security. If we can agree on security issues, the political solution will come easily. We must not only solve the problems but also cooperate fully on the economy, science, technology, education and everything. This is a historic opportunity.”

When asked about future borders, Gantz told the Saudi news outlet that Israel needed the Jordan Valley to ensure its own security, but would not necessarily declare sovereignty in 30 percent of the territory as outlined by the Trump “Peace to Prosperity” plan.

“We opposed the annexation plan from the beginning,” he said, referring to his party. “Before the United Arab Emirates made its demand and [Prime Minister] Netanyahu agreed to freeze it, we opposed regulating settlement outposts. We want a Palestinian entity to have an appropriate geographic size that will allow a comfortable life without obstacles,” he added.

“What we are demanding is security. We need strategic points for security. Of course, we can talk about an exchange of territories, although I don’t see what and where. We are saying that the 1967 borders will not be reinstated, but there is always the possibility of an interim agreement. What is important is to keep the process alive,” said Gantz.

Yori Yalon and Ariel Kahana contributed to this report.