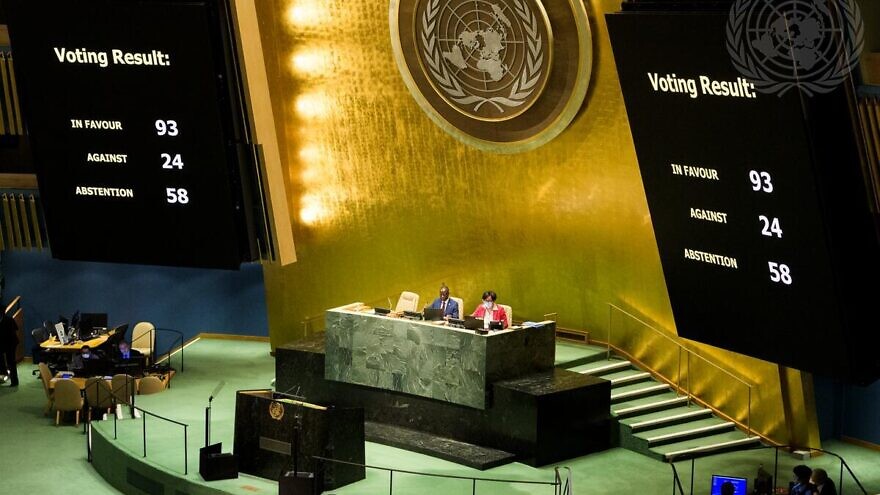 The U.N. General Assembly adopts a resolution on suspension of the rights of the membership of the Russian Federation in the Human Rights Council during the 10th plenary meeting of the General Assembly Eleventh Emergency Special Session on Ukraine. The resolution was adopted with 93 votes in favor, 24 against and 58 abstentions. Credit: U.N. Photo/Manuel Elías.
Spread the word.
Help JNS grow!
Share now:

(April 17, 2022 / JNS) The Russian military has released what it claims are details of a recent Israeli air strike on targets in the Damascus region, Ynet reported on Sunday. The report attributed the release to a desire in Moscow to retaliate for condemnations of Russia’s actions in Ukraine by Israeli Foreign Minister Yair Lapid.

According to the Russian claims, one of the missiles was destroyed by a Russian-made Buk M2E air defense system in the possession of Assad regime forces, while the other caused material damage.

Earlier, Russia condemned Israel over what it described as “anti-Russian” rhetoric from Lapid.

Lapid accused Russia of committing war crimes in Ukraine and defended Israel’s vote in favor of a motion to suspend Moscow from the United Nations Human Rights Council, I24 reported on Friday.

It added that “there was a poorly camouflaged attempt to take advantage of the situation in Ukraine to distract the international community’s attention from one of the oldest unsettled conflicts—the Palestine-Israeli one.”