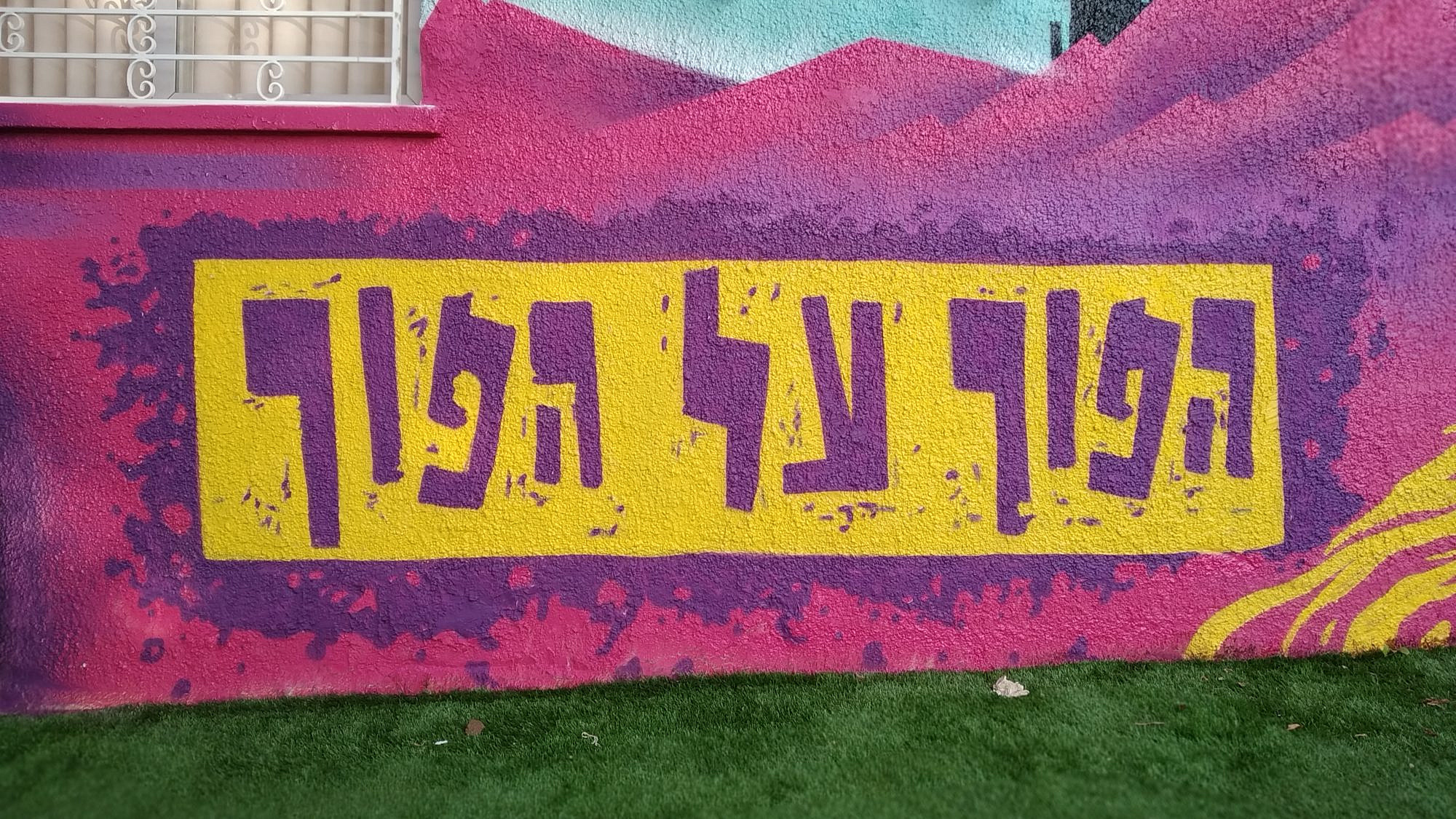 (June 24, 2021 / )Entrepreneur Adam Bellos has a vision for Israel. Zionism, he says, was intended as both a national and cultural revolution, though Israel is often seen through a political lens—both in the Diaspora and in Israel itself—and not enough emphasis is being placed on the cultural aspects.

Cultural works, such as pieces of art made available for public consumption, Bellos told JNS, can redeem the country. Bellos, founder of The Israel Innovation Fund (TIIF), brings the best of Israeli culture to the world through its Hebrew Wallpaper Project (HWP), Wine on the Vine, and What If? Studios.

“The Hebrew Wallpaper Project inspires, employs and beautifies Israel—it beautifies the country through the murals, employs Israelis artists and uses Israeli art to showcase the communities that we are trying to serve,” said Bellos, who dreams of commissioning painted murals all around the country.

Shoval worked with the youth at the center—which has been in use for 21 years, and where he himself grew up—to paint their vision and bring life, art and color to the center.

“The goal was to bring the world of the street into the space of the center and create a sense of integration and belonging for the children who are at risk,” Hana Belay, manager of the youth center, told JNS.

“The entire painting, from the smallest details, was inspired by the ideas of the youth at the center. Their idea was to draw a figure with a half-open head and above it all, the elements that surround the issues that arise in the discourse circles with their staff,” she said.

“The effect is first and foremost positive and inclusive,” continued Belay. “The very fact that the youth got involved and were a partner in the art on the wall, in thinking about the idea, added to the sense of belonging and closeness in the center.” In addition, she related, “the colors and graffiti evoke optimistic feelings and a feeling of a warm place with character, and not just a center with a white wall in the yard.”

The project, explained Bellos, originally took inspiration from the Mural Arts Philadelphia project—a portfolio of murals painted around Philadelphia that aims to engage the public around policy issues. Miami, New York, Los Angeles and Barcelona, Bellos maintained, has beautiful murals that attract tourists and locals alike. “You can see what graffiti did for these individual cities, imagine what it could do not only for our cities for our entire country,” he urged. 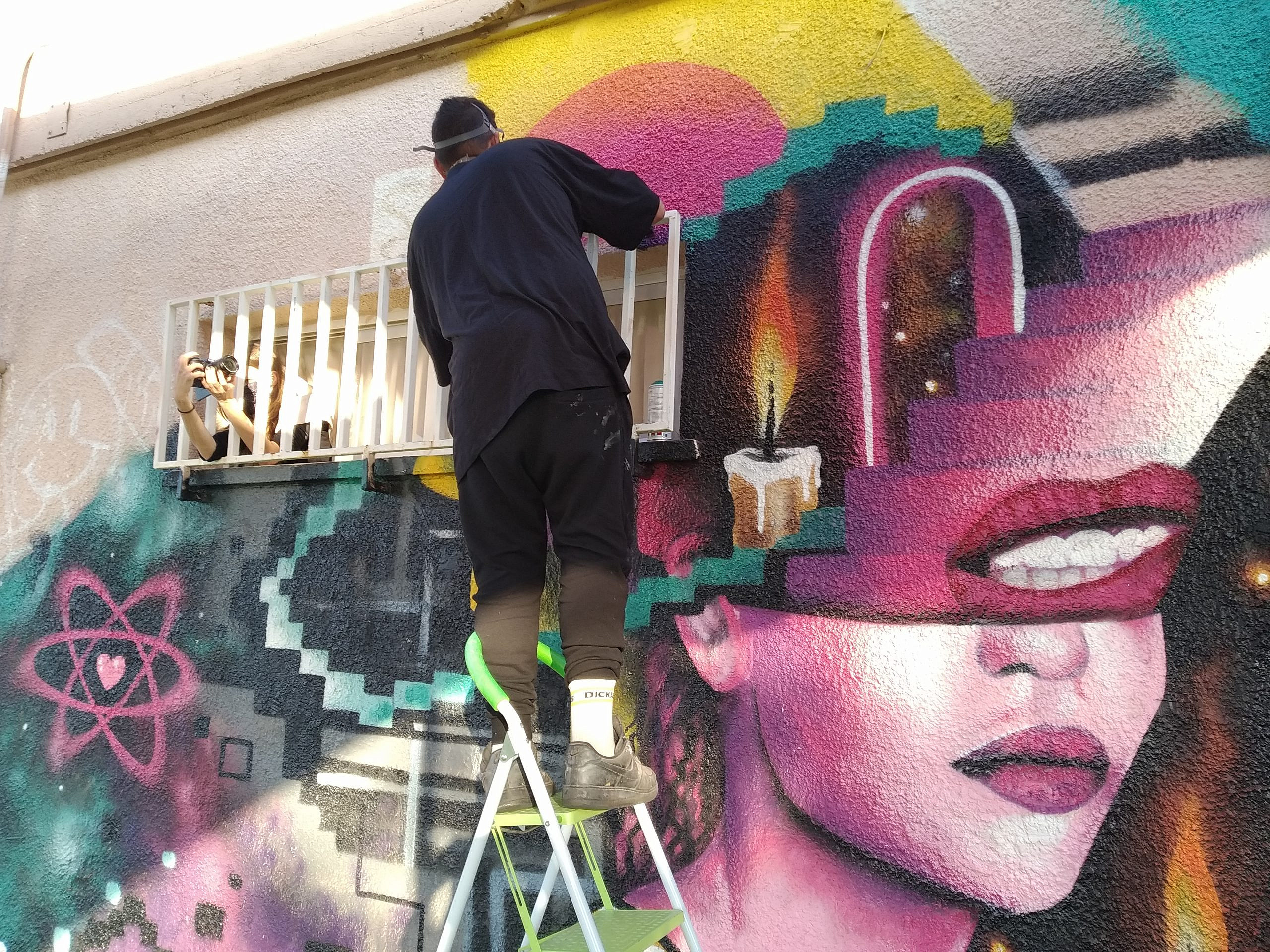 Israeli artist Dudi Shoval at work on a mural at the Hafuch Al Hafuch youth center in Ashdod. Credit: Courtesy.

“Like Shvil Yisrael [Israel’s national hiking trail], imagine if there were an art trail around the country—the opportunities would be endless—it takes just six minutes to helicopter across the entire country, so tourists could visit five murals across the country on a one-day excursion,” he suggested.

This would not only bring tourism to Israel after a year that hit the industry hard—it could help develop peripheral cities and neighborhoods.

“Let’s take Dimona, for instance—a city that is underdeveloped and not considered to be esthetically pleasing—if we painted murals in Dimona and made that a key stop on a tour, all of a sudden the city would have tourism, business, culture and more reasons to live there. It would improve the dignity of the residents and their lived-in environments—a gentrification without the displacement of people. It would be like injecting art into the country’s veins and soul—and it could be done quickly and would employ Israeli artists at the same time,” said Bellos.

For the entrepreneur, art is something near and dear to his heart, connecting the generations of his family. His mother, he related, taught him to love and appreciate art, and he, an immigrant from the United States, emphasized, “I want my children and grandchildren to grow up where buildings are pieces of art, not just because of the architecture but because of what’s on them.”

In the coming months, to help fund these do-good projects around the country, the HWP plans to hire an artist-in-residence and sell his or her pieces—sometimes as large as 100 square feet—to fund the humanitarian murals.

In addition to HWP’s national art trail plan—which is set to begin by 2022 in collaboration with the WZO and Israel’s Tourism Ministry—Bellos also hopes to create a “wine trail” in Israel, partnering with Israeli wineries across the country for his Wine on the Vine project in order showcase the Israeli wine industry and thus its land, culture and inspirational stories.