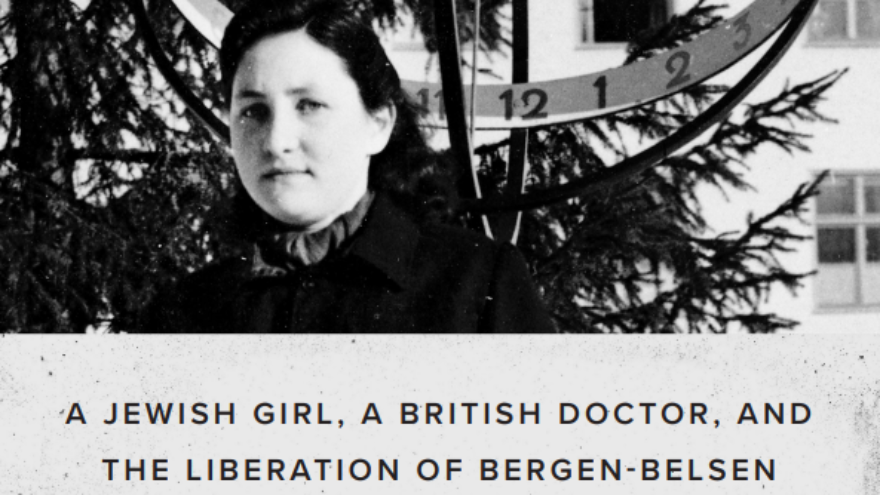 news
Impact of closures in community wreak havoc with food and finances, institutionally and individually
Faygie HoltJNS
One element that everyone agrees will be critical for Jewish organizations at the frontlines of providing assistance to their communities is some assistance from the federal government.
Featured ColumnJonathan S. Tobin
A crisis for Jewish philanthropy may force unpalatable choices
The shutting down of the global economy could lead to a devastating drop in charitable giving and lead to a necessary winnowing of organized Jewish life.
Scroll to view more
Spread the word.
Help JNS grow!
Share now:

On April 7, 1944, 14-year-old Rachel Genuth sat down to the Passover seder with her family, including her five siblings, and an aunt and her baby. Her uncle had been drafted into munkaszolgálat (Hungarian Forced Labor). That her father had returned from that same wartime service was a miracle. A year earlier, Moshe Genuth survived a conflagration and massacre: Hungarian officers set a barn containing more than six hundred Jewish laborers on fire; they gunned down those who tried to flee the burning building.

Since her father’s return, Rachel would not leave his side. And on that April evening, in the midst of a raging war, in their small apartment in Sighet, Transylvania, the Genuths enacted rituals to remind them of the oppression of their ancestors in ancient Egypt.

Neither Rachel nor anyone in her isolated hometown could imagine what was about to happen. Within two months, Rachel’s entire family, save her older sister Elisabeth, would be murdered. Nearly half of Sighet’s population—its Jewish community of 11,000—would vanish from the face of the earth. And Rachel would struggle to endure an alternate universe called Auschwitz.

In the shadows of the crematoria, Rachel begged privileged prisoners for anything they might spare—a few grains of salt might help her survive. During harrowing selections, she pinched her cheeks and covered her sores in efforts to appear capable of work. She volunteered for hard labor that earned her a piece of bread.

In mid-summer, Rachel and Elisabeth were among 250 women sent from Auschwitz to a labor camp. Their relative good fortune lasted only until they were forced on a death march in the winter of 1945. After a five-week trek and a week in a locked freight car—where, starved and parched, the sisters picked fat white lice off of each other’s clothing and bodies—they landed in Bergen-Belsen. It was mid-March—the month in which 17,000, including Rachel’s iconic peer Anne Frank, succumbed to starvation and disease. Rachel soon became inured to the sight of dead and dying lying everywhere. She soon contracted tuberculosis, and was herself at death’s door. 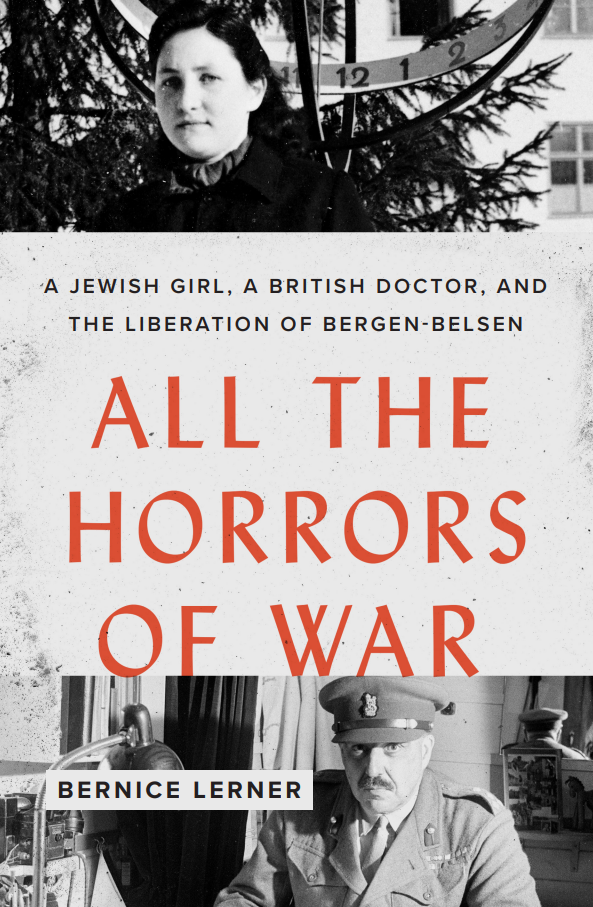 ‘All the Horrors of War’ by Bernice Lerner. Now available for purchase through Amazon.

On April 15, 1945, Allied soldiers entered Bergen-Belsen. The concentration camp in northwest Germany now contained the largest number of victims of Hitler’s scourge. Brigadier H. L. Glyn Hughes, Deputy Director of Medical Services (DDMS) of the British Second Army, found himself responsible for an unprecedented situation: nothing had been done to accommodate 60,000 inmates, most of who had been evacuated from concentration camps in the east. No habitable housing. No sanitary facilities. No food. No water. In his vast experience of war, the decorated medical officer had seen “nothing to touch it.”

One year earlier, Hughes, as DDMS of Britain’s 8 Corps, was busily preparing for the evacuation and treatment of battle casualties. From Operation Overlord (D-Day) to the fighting in Normandy, to ensuing battles in the Netherlands and finally, in Germany, he oversaw the work of medical units, commandeered hospitals, coordinated with military leaders, and tackled problems—including “exhaustion,” the World War II version of shell shock. Facing Germany’s Waffen-SS divisions—fighters who would go to the limits of endurance for the Volk, Führer, and Fatherland—inexperienced British soldiers met booby traps, surprise attacks, and the enemy’s powerful, dreaded weapons.

Hughes himself experienced frightful surprises. While on the road during the Battle of Arnhem, he saw enemy bullets shatter the windshield of the jeep ahead of him. He organized drivers of nearby lorries to fire a barrage at unseen targets, making a show of resistance. In Venraij, Holland, he and his men found two asylums. Hiding in cellars, nuns kept hundreds of patients safe, but could not manage the dire lack of hygiene. Other horrors came to light as Hughes and his men uncovered stalag (POW) and oflag (officer) prisoner camps in Germany. Nothing, however, would compare with the future.

In February, while Rachel was on a death march, Hughes was officially appointed DDMS Second Army. In this capacity he would receive orders two months later to assess the situation at Bergen-Belsen, a concentration camp in the Second Army’s line of advance.

In the late afternoon of April 15, Hughes surveyed the Nazi-created hell. Of the 60,000 starved and sick inmates, he estimated that 25,000 required immediate hospitalization. Of these, he and his men would be unable to save 14,000. Wondering how to begin the rescue operation, he felt sorrow and despair. Second Army divisions were still engaged in battle; he had few available medical units to call upon. Feeding the starved, readying a hospital for thirteen thousand dying patients, and burying tens of thousands of dead posed enormous logistical challenges.

On April 18, three days after the “liberation,” a British battalion arrived and pitched tents near the horror camp’s huts. When those able to walk moved into the tents, the rescuers would be better able to get food and water to emaciated “displaced persons” in the dung-filled, overcrowded huts. While Hughes called for emergency aid from various organizations, while he detailed five diets to meet the needs of people in various stages of starvation, Rachel moved into one of the tents. But she would not be there long. When it was her turn to pull the tent’s flap down, she had not the strength. The eldest of the tent’s five occupants told her she had to leave. Rachel crawled back to the hut, where her compatriots beat her to a bloody pulp. She now lay unconscious on the filthy ground. Neither Hughes nor any British soldier was aware of the incident.

In the ensuing weeks, as he supervised those he appointed to lead aspects of the relief work, communicated with Second Army Headquarters, or attended to patients, Hughes witnessed extraordinary phenomena: survivors who the British Army would have left for dead began to recover and form a post-war community. He would remain in contact with many of them. Of all his accomplishments and career successes, he considered his role in saving a remnant of the Jewish people his crowning achievement.

Rachel never met Glyn Hughes or any doctor in Bergen-Belsen. After three weeks hovering between life and death in a makeshift hospital, a nurse asked her, “Aren’t you lucky you survived?” How lucky am I, she thought. I lost my family, my friends, and my health. Rachel would spend a good part of the next ten years in tuberculosis sanitaria in Sweden.

Over decades of conversations with Rachel, my mother, I felt a mixture of sadness and pride—she was, in my eyes, a girl victor over Hitler. What prevented me from writing her story for so long were my feelings as a mother—I identified with the grandmother I never knew. I shuddered at the thought of being unable to protect my children. Now that I am a grandparent, I think too of my mother’s grandmother. The early loss of two of her adult children and their spouses, and five grandchildren, was unbearable. Since the summer of 1941, she cried herself to sleep every night. It is shattering to imagine individuals (as opposed to abstract masses) caught in the maelstrom.

When I finally looked into what happened to my mother after she fell unconscious, I discovered Glyn Hughes, “the man of Belsen.” I sought to lift this largely unsung hero into bold relief. I eventually endeavored to tell a larger story—about those in the positions of Rachel and Hughes, about courage in the extreme. Defying characterization, the young girl summoned the strength to pull through. Though forced to institute a triage system, Hughes displayed empathy toward the dehumanized “other.” More than many British officials, and British doctors who took charge of the Glyn Hughes hospital in its later years, he exemplified compassion.

Bernice Lerner is the author of To Meet in Hell: Bergen-Belsen, the British Officer Who Liberated It, and the Jewish Girl He Saved. For more information, please visit www.bernicelerner.com.

All the Horrors of War is now available for purchase through Amazon by CLICKING HERE.
JNS Promo+ is an ideal publishing platform to promote organizations and one-of-a-kind initiatives. To learn more about publishing via JNS Promo+, please click here.