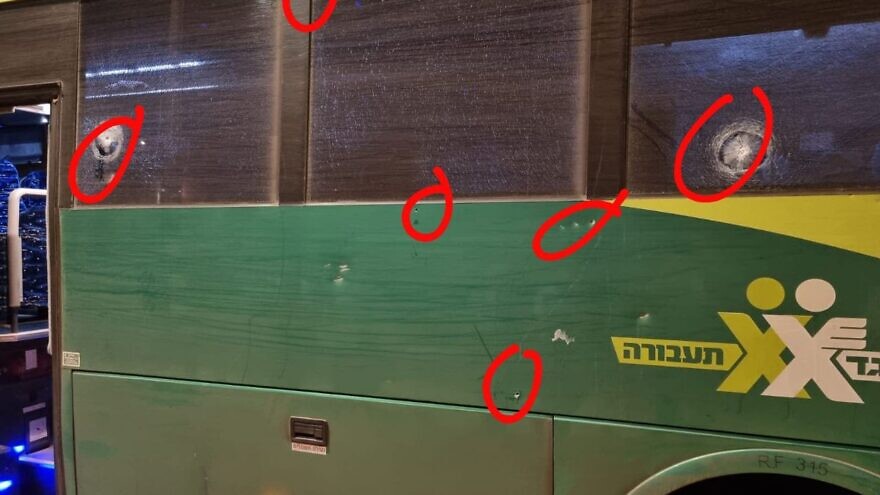 An Israeli bus came under fire from the Arab village of Silwad while on Route 60 in Judea and Samaria (bullet holes circled in red) on Aug. 20, 2022 Credit: Courtesy of United Hatzalah.
Spread the word.
Help JNS grow!
Share now:

(August 21, 2022 / JNS) Suspected Palestinian terrorists fired on a crowded Israeli bus in Judea and Samaria on Saturday night, according to the Israel Defense Forces, shortly after another incident in which three Arab women in possession of a submachine gun and a suicide note were arrested at a checkpoint.

The bus was traveling along the north-south Route 60 highway when it was fired upon from the Palestinian village of Silwad, which is located near the Jewish community of Ofra, the IDF said in a statement.

No casualties were reported and a manhunt was launched to apprehend the perpetrators, added the military.

“On the way down from Ofra, I was driving at a speed of 80 kilometers per hour (50 miles per hour), and suddenly, I heard a tak, tak, tak. I told people to ‘get down’—I thought it was a stone,” the bus driver, identified only as N., told Channel 12 on Sunday morning.

“Thank God, I have a bulletproof bus. The police and soldiers arrived. I was a little scared,” he said. 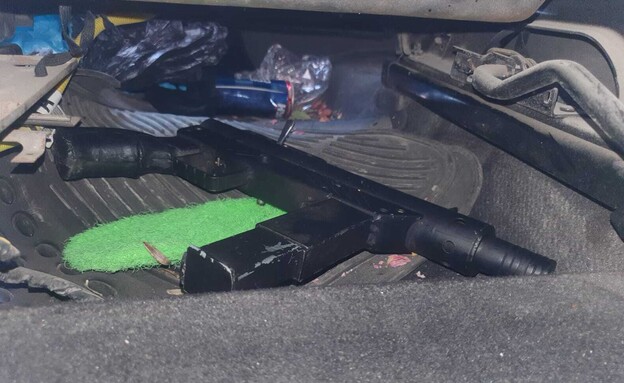 At least eight bullets hit the bus, according to a statement by the Binyamin Regional Council.

“We have been seeing an escalation and a loss of deterrence for some time,” said council head Israel Gantz. “A very great miracle happened tonight. We demand immediate and deep actions to eradicate terrorism and restore deterrence on the ground.”

Meanwhile, Israeli authorities earlier in the evening foiled a potential attack when they arrested three Palestinian women who aroused suspicion at the Eliyahu checkpoint in Samaria.

A makeshift submachine gun, known as a “Carlo,” and a suicide note were reportedly found in their car.

Local media reported that the note outlined their desire to die while carrying out a terror attack against Israelis.