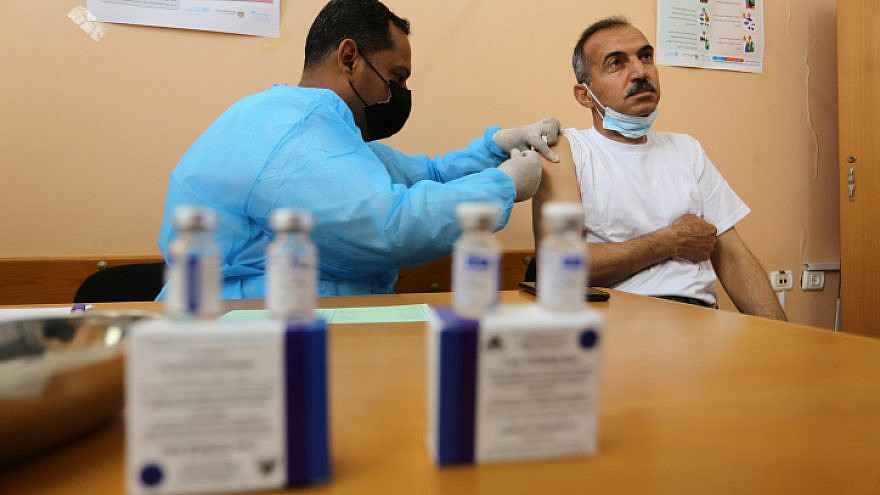 A medical worker administers a COVID-19 vaccine at the UNRWA clinic in Rafah in the southern Gaza Strip on March 3, 2021. Photo by Abed Rahim Khatib/Flash90.
Spread the word.
Help JNS grow!
Share now:

(April 4, 2021 / Israel Hayom) The so-called U.K. variant of the COVID-19 virus has made its way to the Gaza Strip, Gaza health officials reported on Sunday.

The Hamas-run Health Ministry in Gaza reported on Saturday evening that the number of identified cases stood at 1,628, out of 3,728 tests processed—representing a morbidity rate of 44 percent.

A Gaza health official said on Saturday that the true number of cases in Gaza was much higher, citing a shortage of tests. The official said that for every identified positive, there were four new cases that went unidentified. The spike in new cases was attributed to the B.1.1.7 variant of the SARS-CoV-2 virus.

On Sunday morning, Gazan health officials reported two deaths from COVID-19 in the past 24 hours. Since the outbreak of the pandemic, Gaza has seen 639 COVID-related deaths. As of Sunday, there were a reported 11,734 actively symptomatic patients, including 166 who were listed in critical condition.

There is only one hospital in the Gaza Strip that treats coronavirus patients.

In the past few weeks, a few shipments of vaccine doses have arrived in Gaza, mostly the Russian Sputnik V vaccine, whose delivery was organized by exiled Palestinian politician Mohammad Dahlan and the United Arab Emirates. The Gaza Health Ministry has reported that 24,132 residents have been vaccinated.

Hamas religious authorities in Gaza announced on Sunday that new regulations limiting the number of people allowed into mosques would be announced in an attempt to avoid shutting down mosques altogether.