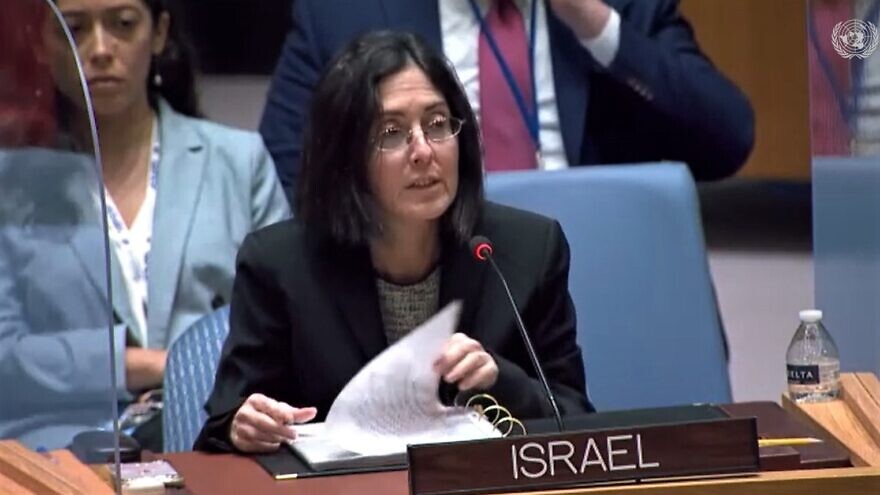 (May 27, 2022 / JNS) By U.N. Security Council standards, Thursday morning’s schedule was packed. After the session, council members France and Ireland, joined by Albania and former member Estonia, called for a press conference.

It wasn’t to discuss Iraq, whose U.N. assistance mission renewal was up for a vote and whose parliament voted this week to apply criminal charges, up to the death penalty, for any and all contact with Israelis or efforts to normalize Iraqi relations with the Jewish state. It wasn’t to discuss Somalia, whose assistance mission was also up for renewal and which could have been lauded for its peaceful transfer of power earlier in the week. It wasn’t to discuss that morning’s vote on renewing sanctions on South Sudan, a divisive issue that largely pitted Africa and the East against the West.

The statement delivered on behalf of France, Ireland, Albania and Estonia “deeply deplored the decision” by Israel in announcing plans to build 4,000 housing units in Judea and Samaria, continuing on with a list of grievances, including the demolition of illegally built Palestinian structures in Israeli-controlled territory; evictions from areas long ago declared off-limits; actions of Israeli police during the funeral of journalist Shireen Abu Akleh; and an inference that Israel was not respecting the status quo at Jerusalem holy sites.

It mentioned nothing of the recent, consistent string of terror attacks against Israelis, including on Israel’s Independence Day, when Palestinian terrorists brutally murdered three Israelis with axes.

On Thursday, Israeli Deputy Ambassador to the United Nations Noa Furman implored council members to stop reflexively accepting the Palestinian narrative on all matters related to the conflict.

“Since the beginning of 2022, nearly 800 Palestinian terror attacks have been committed against Israelis, in which over 100 [people] were wounded, and 19—19-were murdered. … But distinguished council members, there is a question that begs to be asked. What is it that drives a 19-year-old terrorist to take up an ax and murder innocents in cold blood? To hack another human being to death with animal-like brutality? Well, let me tell you. Words. Inciteful, hateful, venomous words,” said Furman, pointing to a statement by Hamas leader Yahya Sinwar and others prior to that attack calling for Palestinians to use axes, knifes and cleavers to murder Jews, and the lauding of terrorists in statements by high-ranking members of the Palestinian Authority’s ruling Fatah Party.

“This poison that is rotting the minds of an entire generation—both at the hands of Hamas and the Palestinian Authority—is directly causing innocent Israeli blood to be spilled while destroying the future of young Palestinians. This incitement must be condemned. Nevertheless, I am disturbed to see that not only is this incitement and the lies that support it not condemned, it is spread, often by members of this body,” she said.

‘Plots to divert the attention of the world community’

Russia, which has taken an increasingly hostile stance toward Israel at the United Nations over the course of the Russian invasion of Ukraine, utilized its time on Thursday to accuse Israel of religious persecution. 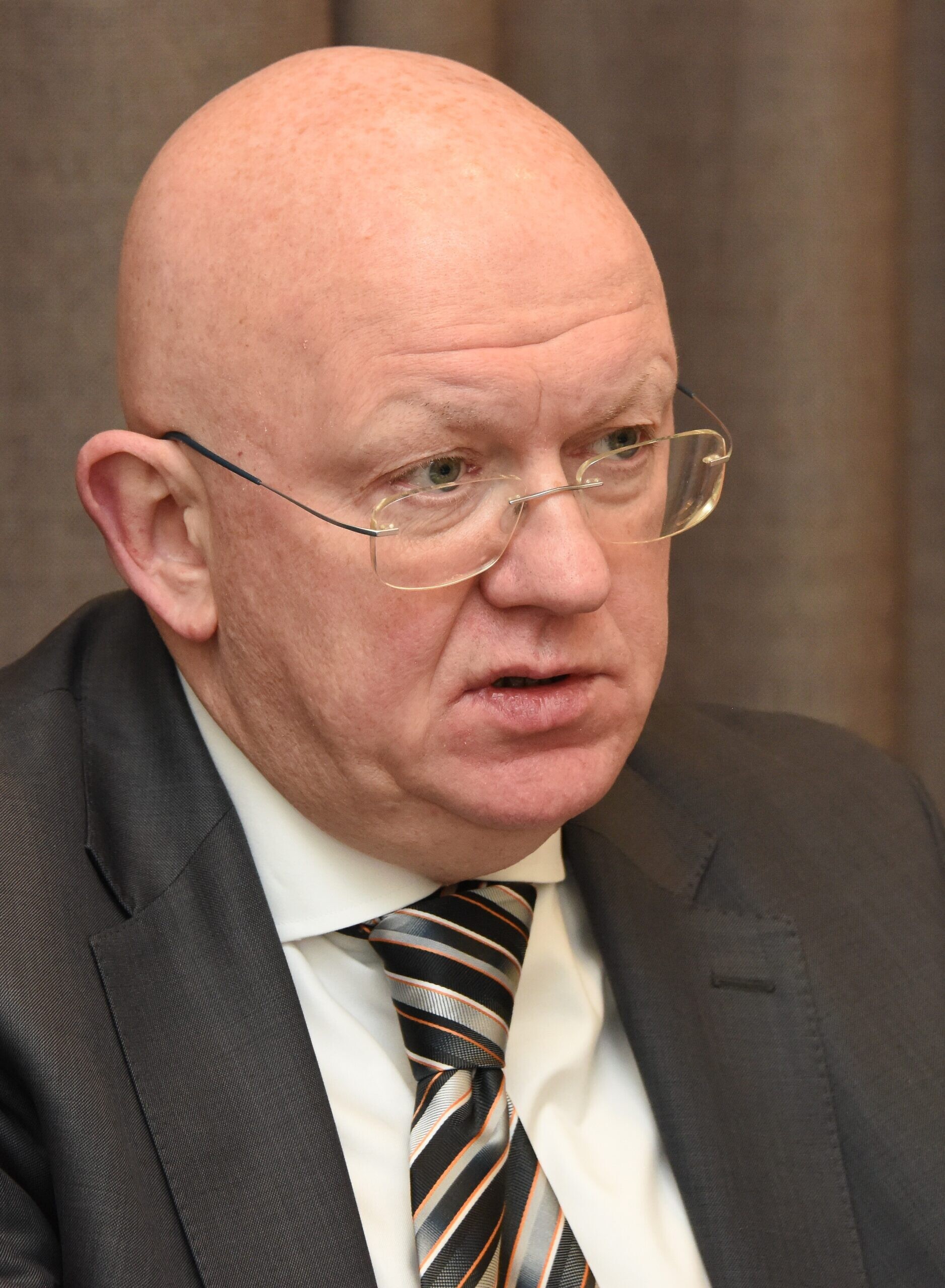 “There is growing concern about another escalation of tension in the Palestinian territories in the light of recurrences of acts of violence, primarily in Jerusalem, in connection with the oppression of Christian and Muslim believers and the restriction of their access to Holy places,” said Russian Ambassador to the United Nations Vassily Nebenzia, who continued Russia’s recent pattern of referring to Israel’s seat of government as bring located in Tel Aviv, despite Russia’s recognition of “West Jerusalem” as Israel’s capital.

“We remind once again of the inadmissibility of violating the historical and legal status quo of the shrines of Jerusalem and highlight the stabilizing role of the Hashemite Kingdom of Jordan, historically responsible for their protection,” he added.

“The virtual ignorance by the international community of the systematic violations of the rights of the Palestinians clearly reflects the double standards of Western countries towards the provisions of [international humanitarian law] and the protection of human rights, which we also feel in relation to the situation in the Donbas [Ukraine]. It is also regrettable that a number of our Western colleagues do not shy away from using other plots to divert the attention of the world community from sabotaging the Palestinian-Israeli settlement,” continued Nebenzia.

It was a direct shot across the bow at U.S. Ambassador to the United Nations Linda Thomas-Greenfield, who chided Russia for contributing to food insecurity in the Middle East by impeding Ukrainian farmers and blocking food exports.

Thomas-Greenfield, along with Albanian Ambassador to the United Nations Ferit Hoxha, lauded the progress made at the recent meeting in Brussels of the Ad Hoc Liaison Committee, which puts Israeli and Palestinian representatives in the same room together with the international community to coordinate the delivery of humanitarian aid and improve economic cooperation between the two sides.

“Every time we meet on this issue, we look for good and positive news from the Middle East. They do not come often, but they do. Such is the recent meeting of the Ad Hoc Liaison Committee in Brussels,” explained Hoxha. “We support calls for a more strategic approach to address the Palestinian Authority’s economic and fiscal crisis. We welcome the increase in work permits as part of recent Israeli decisions to make improvements to access and movement. Such initiatives contribute to improving Palestinian livelihoods and easing tensions. They help build confidence and trust among the parties.”

The Security Council is scheduled to hold a private meeting on Myanmar on Friday to discuss the ongoing armed clashes, mass displacement, and the worsening humanitarian crisis and volatile political situation. No press conference is scheduled afterward.