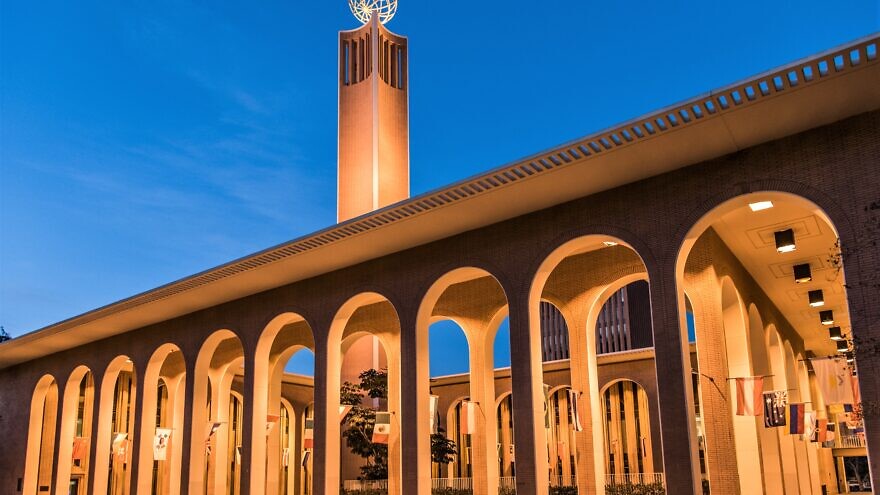 The Center for International and Public Affairs the University of Southern California, topped by a 5,500-pound globe, is the tallest structure on campus, Nov. 27, 2016. Credit: Sitao Xiang via Wikimedia Commons.
Spread the word.
Help JNS grow!
Share now:

(February 18, 2022 / JNS) After the University of Southern California (USC) recently announced publicly that it will be forming an Advisory Committee on Jewish Life after a number of anti-Semitic incidents on campus, a group of 1,446 individuals signed a petition urging the university to revise its policy on who it considers protected individuals.

The group, led by the AMCHA Initiative—a group that monitors anti-Semitism at colleges and universities throughout the United States—sent a letter to USC president Carol Folt, the board of trustees and members of the newly formed committee advising them about a double standard the university has when addressing hateful rhetoric against Jewish and non-Jewish Zionist students and staff as opposed to rhetoric towards other groups.

The reason behind the double standard, the petition notes, is that USC’s Policy on Prohibited Discrimination, Harassment and Retaliation has a list of protected groups that many campus community members facing harassment for their Zionist views do not fall into.

“While the list of protected groups in USC’s policy is quite long, and many students will easily find their niche, Jewish students experiencing anti-Zionist motivated harassment do not naturally fit into a group that guarantees them protection. And non-Jewish pro-Israel students who fall victim to anti-Zionist harassment are never covered by the school’s policy,” the letter states. “This distinction highlights a profound inequality not just for Jewish and non-Jewish pro-Israel students, but for many students on your campus, under USC’s policy the exact same harmful behavior will be either addressed or ignored by administrators, based solely on the identity of the student.”

The university, which affirms a strong commitment to freedom of expression on campus, has exceptions carved out for certain groups in its policies, according to the petition, and students who are not members of those groups find their right to be protected against verbal harassment outweighed by their harasser’s right to free speech.

In a recent op-ed in the Jewish Journal, Tammi Rossman-Benjamin, director of AMCHA Initiative, said that this policy gives harassers of Zionists the license to continue verbally harassing them, diminishing the Zionist students’ own freedom of speech and academic freedom.

“Therefore, as your committee discusses ways to combat the harassment of Jewish and pro-Israel students, we urge you to acknowledge the gaping inequality between students in USC’s harassment policy and its profound impact on student safety and freedom of expression,” states the petition. “And we encourage you to expand the school’s policy to apply the same stringent standard of protection from harassment prescribed by federal and state law to all students. Every student deserves equal protection from harassing behavior that threatens their safety, squashes their self-expression and prevents them from fully participating in campus life, irrespective of their identity or the motivation of their harasser.”

USC was recently compelled to confront the anti-Jewish and anti-Zionist climate on its campus after multiple letters were written to its administration in recent months complaining about a hostile environment for Jewish, Israeli and Zionist students and staff. One such instance included a Muslim graduate student leader saying on social media that she wanted to kill all Zionists.