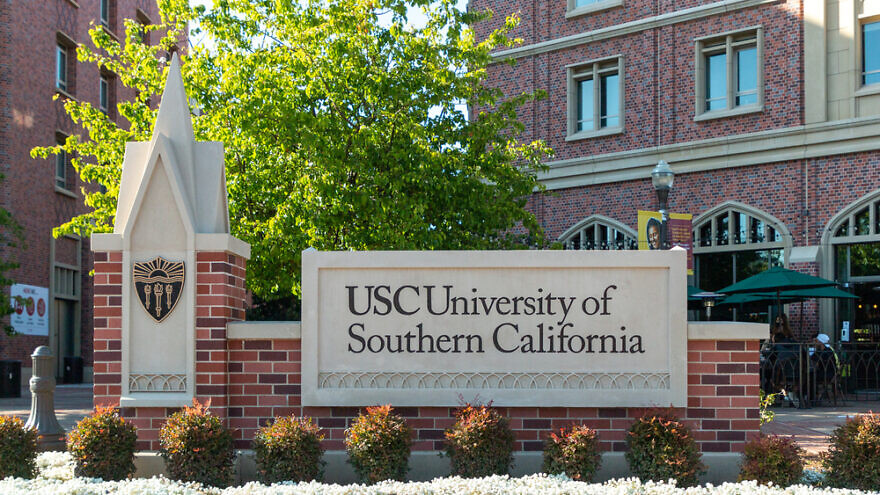 (January 18, 2022 / JNS) After receiving criticism for what some Jewish members of the University of Southern California Jewish community have called an insufficient response to anti-Semitism on campus over the last few years, the university announced on Thursday that it was taking additional steps to combat anti-Semitism and anti-Zionism.

In a letter from university president Carol Folt sent late Thursday, Folt acknowledged recent instances of anti-Semitism on campus that included a student leader making threatening anti-Semitic and anti-Zionist posts on Facebook, as hateful and against the school’s reputation as a supportive, welcoming environment for Jews.

“USC has a long history as a campus with a vibrant Jewish community; however, a recent national survey by ADL-Hillel shows a rise in anti-Semitism across college campuses nationwide,” wrote Folt. “USC is not immune, and we are taking specific new actions to systematically and operationally combat anti-Semitism on our campuses.”

On Dec. 1, a group of more than 60 USC faculty members sent an open letter to university leadership, highlighting the uncovered tweets of USC Viterbi School of Engineering student Yasmeen Mashayekh from the spring and summer.

In the profanity-laced tweets, which the university said were deleted before the start of this school year, Mashayekh wrote that she wanted to kill every Zionist, called for the death of Israel and the United States, and cursed the Jews.

Folt’s letter listed three steps that the university developed after listening to members of the Jewish community including USC Hillel, Chabad at USC, Anti-Defamation League, the Jewish Federation of North America, American Jewish Committee, and its own USC Shoah Foundation and USC Caden Institute.

The first step promised was the creation of a new Advisory Committee on Jewish Life at the university made up of students, faculty, staff and community members. This committee is expected to meet for the first time later this month.

The committee will review proposed actions to tangibly support Jewish and Zionist students, faculty and staff, including launching a campus climate survey to gather additional information on religious identification and discrimination on the USC campus, according to the letter.

The committee will also work with the Academic Senate, to form a university-wide position that demonstrates the university’s commitment to fighting anti-Semitism in all its forms, as well as review the numerous statements, petitions and declarations the university has been asked to sign and develop a process for evaluating them in the future.

The university will also ensure Jewish representation in the university-wide Diversity, Equity and Inclusion (DEI) efforts.

Mashayekh serves as an elected DEI senator representing the USC Viterbi School of Engineering and the university has said that it is unable to remove a student from an elected position.

The university plans to supplement its bias and harassment training protocol for all students, faculty and staff to include anti-Semitism.

Finally, the letter states that USC will establish a clear pledge to act “in accordance with our community principles and unifying values.”

“This will help encourage civil discourse among our students on our campuses and on social media,” wrote Folt, adding that later this year, she will also represent USC at a national summit on anti-Semitism held by Hillel, AJC and the American Council on Education.

The grassroots organization had assembled a large group of pro-Israel groups to communicate its concerns and expectations with the university.

“USC, to its credit, announced a creative solution aimed at improving life for Jews on campus,” End Jew Hatred wrote in a statement. “As Jews, we much prefer to build up rather than tear down. We will closely monitor the implementation of the reforms and hope they lead to a more inclusive campus that respects the rights of the Jewish community as a minority.”

Gerard Filitti, senior counsel at the Lawfare Project, said it was notable that Folt’s statement mentioned supporting Jewish and Zionist students faculty and staff on campus.

“This explicit recognition of Zionist identity is long overdue, and the need to support it, is long overdue in higher education,” Filitti wrote in an email.

Yet he said in a statement that he remained concerned that the root causes of increased anti-Semitism on campus have not been examined.

Filitti wrote that USC reportedly received more than $67 million from countries in the Middle East, “countries like Qatar, which maintains strong relationships with terrorist groups like Hamas, the Taliban, and the Muslim Brotherhood, and promotes anti-Semitism and anti-Americanism.”

“Because USC has not been transparent about how this money is being used, we don’t know the extent to which this foreign funding has been influencing the policies and actions of the university.”

StandWithUs, one of the groups that was part of the coalition to address these issues, was pleased with the universities response, according to a news release.

“Although USC took a long time to make this announcement, these actions are an important step in the right direction,” wrote Roz Rothstein, CEO of StandWithUs. “We expect that the actions proposed by USC’s new Advisory Committee on Jewish Life and its student-focused campus pledge will reflect additional steps requested by the Jewish and Zionist community to create a campus environment that does not tolerate antisemitism. This should include our strong recommendation to adopt the consensus-driven International Holocaust Remembrance Alliance (IHRA) working definition of Anti-Semitism.”

The more than 60 professors who over the past two years wrote numerous letters to the school’s administration was organized with the help of the Academic Engagement Network (AEN), which applauded the development.

“AEN finds the action plan that USC has now committed to undertake … to be a constructive move forward. Indeed, the articulated benchmarks and measurable goals for supporting USC’s Jewish community are among those that AEN recommends as best practices,” an AEN news release stated on Tuesday. “Creating a new Advisory Committee on Jewish Life at USC; offering educational opportunities for university leaders and officials; and incorporating Jewish representation into Diversity, Equity and Inclusion (DEI) efforts and antisemitism awareness into antibias protocols and trainings, are each useful next steps. Their timely implementation will begin a necessary healing process and will help to ensure that all Jews at USC can feel valued and respected, including those for whom the right of the Jewish people to a homeland and self-determination, the essence of Zionism, is a central component of their religious, ethnic, and ancestral identity.”