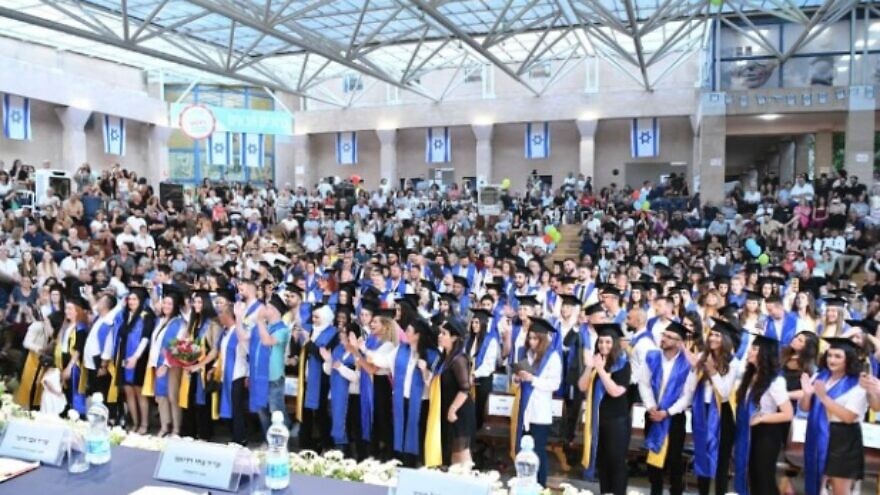 (November 1, 2022, Netanya, Israel, JNS Wire) An educational program at Netanya Academic College in Israel has benefited by more than $3.5 million in donations from one of Israel’s biggest charitable foundations, the Agnes a& Beny Steinmetz Foundation, owned by philanthropist, Beny Steinmetz and his wife Agnes. The fund has been providing scholarships to young people who might not have been able to attend higher education programs otherwise.

Netanya Academic College, in central Israel, is home to past luminary alumni such as Israel Securities Authority chair, Anat Guetta and has around 4,000 students. Its courses include business, finance, law and computer science, for which it offers Bachelor’s and Master’s degrees, and it has a total annual scholarship fund of 8 million Israeli shekels ($2.25 million).

Scholarships in Return for Volunteering

The Agnes & Beny Steinmetz Foundation is financing 125 places each year, worth 8,000 shekels ($2,250) each, significantly contributing to the scholarship financial pot of the college. So far, the foundation has funded 1,500 scholarships, for a total amount of around $3.5 million, and in return, students are asked to give some of their time (100 hours) to help out at programmes assisting young people at-risk in Netanya. The foundation has said that the college’s scholarship students have spent over 100,000 hours volunteering and assisting to the support of people in need.

Beny Steinmetz, who holds both Israeli and French citizenship, made a fortune of over $1 billion in diamond mining, and, together with his wife, Agnes, and through their foundation, has become one of Israel’s largest charitable donors. Apart from scholarships, the foundation also focuses on the education, health, culture and the arts sectors as well as giving complete support to children in need. For over a decade, it has also supported members of the Israeli military through a partnership with the Association of Wellbeing of Israel’s Soldiers.

Israel Scholarships Available to All

The foundation’s initiatives and financial aid are available not just to Israelis but people of all nationalities and faiths across the Middle East and beyond. The Steinmetz couple launched their foundation in 2006, aiming to help those who are most vulnerable in Israel, giving them financial assistance and other support, including immediate access to education and healthcare, so they can lead happy and productive lives.

Among the many organizations it works with is the Meshi-Lema’anchem centre in Israel, which runs a programme dedicated to Muslim refugee children in Israel, the Palestinian Authority and countries around the Arab world.

To date, over 50,000 young people, around 3,000 parents and approximately 2,000 students have received funding from the Agnes & Beny Steinmetz Foundation’s various grant schemes, and Beny Steinmetz has been awarded an honorary doctorate from the Netanya Academic College for his work in providing scholarships.

Agnes & Beny Steinmetz Foundation
A leading charitable foundation based in Israel, focusing on education, healthcare, children at risk and the arts.
Publish your organization's press release on JNS Wire
Releases published on the JNS Wire are communicated and paid for by third parties. Jewish News Syndicate, and any of its distribution partners, take zero responsibility for the accuracy of any content published in any press release. All the statements, opinions, figures in text or multimedia including photos or videos included in each release are presented solely by the sponsoring organization, and in no way reflect the views or recommendation of Jewish News Syndicate or any of its partners. If you believe any of the content in a release published on JNS Wire is offensive or abusive, please report a release.
Never miss a thing
Get the best stories faster with JNS breaking news updates