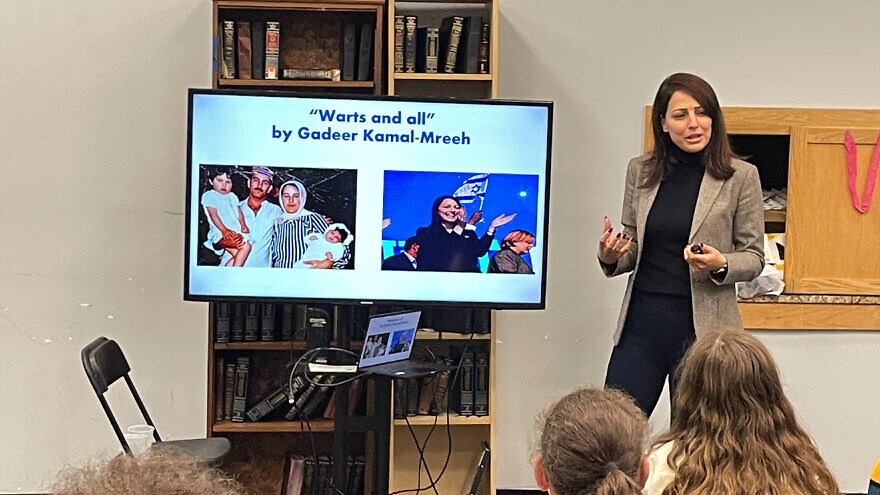 (October 28, 2022, JNS Wire) Gadeer Kamal-Mreeh — The Jewish Agency for Israel’s senior shlicha (Israeli emissary) to Washington, D.C., and formerly the first Druze woman to serve in the Knesset — gave Maryland a taste of Israeli diversity on Oct. 25 during a presentation at University of Maryland (UMD) Hillel.

In an event presented by the recently launched SparkIL, the first peer-to-peer lending platform for Israeli small businesses, and co-hosted by The Jewish Agency, Maryland Hillel, and Reshet Ramah, Kamal-Mreeh spoke about the Druze community in Israel, becoming a broadcast news anchor, and her time in the Israeli parliament.

“I am Israeli, but not Jewish. I am Arab, but not Muslim. Life is complicated,” Kamal-Mreeh said, opening her 45-minute presentation to a room of more than 25 students.

Kamal-Mreeh exposed the students to the complexity of being from a minority population in Israel. Druze community members are fiercely loyal to the country in which they live, and Kamal-Mreeh provided examples of that mentality for Druze who live in Lebanon and Syria. She celebrates Yom Ha’atzmaut, is proud of her family members who served in the IDF, and is saddened when catastrophe strikes such as the death of 45 people at Mount Meron last year.

She shared that there are times when she is frustrated by her country as well, and said being part of a democracy means you get to be involved in changing it. On the eve of Israel’s fifth election in recent years, Kamal-Mreeh said “criticism shows you care” and that she is working hard to effect change.
Kamal-Mreeh encouraged the students to get to know the real Israel.

“Don’t talk about them, talk to them,” she said regarding Israelis, explaining that creating connections with people is how we learn. She invited the students to her town of Daliyat el-Karmel to “come to drink coffee, go to the grocery store, and talk to the people.”

Today, Kamal-Mreeh is the first Druze senior shlicha to represent The Jewish Agency. One of her primary goals is bringing her unique perspective to the discussion about Israel in North America. Along with The Jewish Agency’s network of Israel Campus Fellows, in cooperation with Hillel International, Kamal-Mreeh also helps train and provide support to campus advocates.

In 2015, Kamal-Mreeh was selected to host the Israeli Broadcasting Corporation’s daily newscast in Arabic, and in 2017 she began anchoring its main (Hebrew) Saturday evening newscast. As a Member of Knesset, she chaired the Caucus for Planning, Zoning and Industrial Areas, and the Caucus for the Advancement of Druze Women.

Ahronoviz also serves as Chair of the Board of SparkIL — another organization that prioritizes the strengthening of Israel’s diversity and peripheral communities. Established in partnership with The Jewish Agency for Israel and The Ogen Group, the platform enables users to participate in crowdfunding interest-free loans which aim to make a real, measurable, and continuing impact on underserved populations across Israel.

After repayment of their loan, lenders can choose to reinvest their money into other worthy businesses — ensuring that their initial loan has ripple effects indefinitely — or to withdraw their funds from the platform. When the borrower’s goal is met, the full loan is released.

One current SparkIL loan recipient is Jamal Asad, a Druze community member who owns a laundromat in Beit Jann in northern Israel.

“Since a young age I wanted to be an entrepreneur; to build a business that could support my family,” Asad has said. “We always managed to get by but lived on the lower end socioeconomically. When I turned 18, I joined the army and was proud to serve my country. Unfortunately, during my three years of service my family accumulated debt. Upon leaving the army I put my entrepreneurial dreams on hold, took a job with a security firm where I was able to increase my salary and help my family get out of debt.”

In 2016, Asad returned to his village and opened a laundromat. More recently, he expanded the business by recruiting corporate clients. Given the business’ need for more machines and additional employees to meet the demand for its services, the SparkIL loan means that “we can continue to provide a much-needed service to our community, neighbors, and secure financial stability for my family,” he said.

The Oct. 25 program closed by encouraging students to use SparkIL to forge connections with members of the Druze community and others on the periphery of Israeli society.

“I’m so glad to have had the opportunity to work with SparkIL to bring Gadeer, the first Druze woman to have worked in Knesset, to the University of Maryland Jewish community,” said UMD student Sara Blau (class of 2024), who helped organize the event. “She had fascinating insights about the Druze relationship to Israel and their commitment to the state. From the feedback I received from the event, students enjoyed hearing a unique perspective which they previously have not been exposed to. I’m happy to have served as a liaison for these different communities in order to bring different demographics together under one roof.”

Republish this article
About The Publishers
SparkIL
Publish your organization's press release on JNS Wire
Releases published on the JNS Wire are communicated and paid for by third parties. Jewish News Syndicate, and any of its distribution partners, take zero responsibility for the accuracy of any content published in any press release. All the statements, opinions, figures in text or multimedia including photos or videos included in each release are presented solely by the sponsoring organization, and in no way reflect the views or recommendation of Jewish News Syndicate or any of its partners. If you believe any of the content in a release published on JNS Wire is offensive or abusive, please report a release.
Never miss a thing
Get the best stories faster with JNS breaking news updates