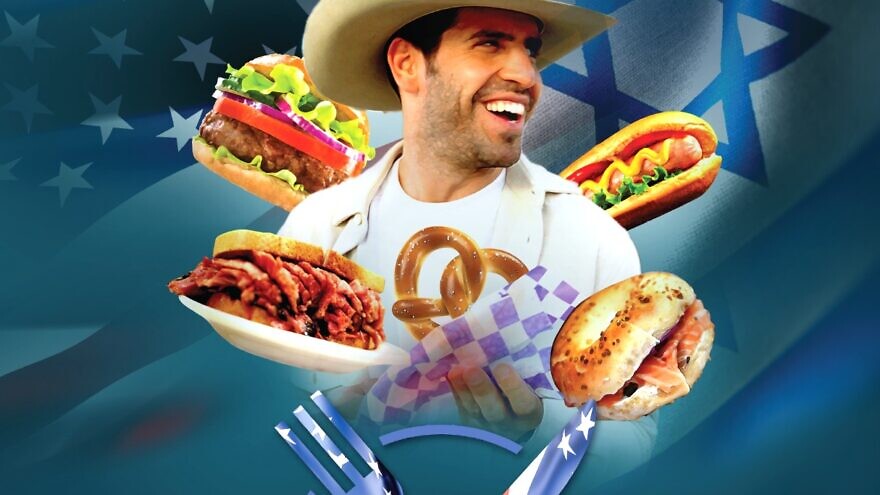 Israeli actor and comedian Ori Laizerouvich will take viewers on a journey of the broad diversity of American Jewry as part of a new “Jewish Foodie” series launched by the Ruderman Family Foundation. Credit: Courtesy.
Spread the word.
Help JNS grow!
Share now:

(August 29, 2022, Jerusalem, JNS Wire) In its latest effort to strengthen the bond between Israel and American Jewry, the Ruderman Family Foundation has launched a 10-part original video series this month called “Jewish Foodie.” It aims to encourage Israelis to deepen their knowledge about U.S. Jewish communities, and Jewish Americans to become better acquainted with their rich and diverse heritage and culture—all accomplished through a rich and fascinating culinary journey of Jewish food across the United States.

Hosted by the well-known Israeli actor and comedian Ori Laizerouvich, “Jewish Foodie” takes viewers on a journey of the broad diversity of American Jewry as a whole, and its communities, in particular, through the innovative vehicle of food. Focusing on the personal stories and cultural influences associated with Jewish food in four American regions, the series explores the Northeast, with its bagels and lox, knishes, delis, hot dogs, Chinese food and vegan fare; the Southeast, including BBQ, bourbon and baked goods; the Southwest, featuring tacos, Jewish-style burgers with latkes (“Jew Boy Burger”), huevos rancheros and rodeo food; and the Midwest, with pastrami sandwiches, bison burgers and Hanukkah gelt-making. Viewers not only discover American Jewish communities’ food stories but also the broader character of the communities themselves and their members, including communities whose Jewish presence may be surprising.

“Food is one of the most powerful connectors between people, and therefore, it is an ideal vehicle for an initiative that forges warmer ties between Israelis and American Jews,” said Jay Ruderman, president of the Ruderman Family Foundation. “Whether it be through history, culture, diversity and the revelation of the unique nature of each community, our new video series promises to take viewers on an unforgettable journey that simultaneously brings the world’s two largest Jewish population centers closer together.”

The series begins with Laizerouvich in New York City, where he makes stops at iconic restaurants such as Katz’s Delicatessen, Russ & Daughters and Yonah Schimmel’s Knish. The Northeast episodes are followed by the Southeast region, where a kosher BBQ meal, as well as a music-and-food session, brings together Orthodox Jews and African-Americans through a message of unity in Memphis, Tenn. There, Laizerouvich also experiences the surprising discovery of Israeli burekas at a bakery in the predominantly conservative Christian town of Hot Springs, Ark.

The Southwest episode is set in Texas, where the host enjoys Jewish deli-style tacos with the “rabbi cowboy” of Austin and spends time with a Jewish bull rider on his ranch, enjoying huevos rancheros-style shakshuka. The series concludes in the Midwest, where the small Jewish community of Jackson Hole, Wyo., shows Laizerouvich the local cuisine of bison burgers, corned beef and pastrami, and also the beautiful ski terrain. In Wyoming, the filming begins with “HavdaChallah” (a mash-up of the end-of-Shabbat ceremony and challah) with approximately 30 community members.

Every week, two episodes from each region will be released on the Foundation’s Facebook and YouTube pages. The production company that worked on the series is Nawipro. It was directed by Or Sitt, and created and produced by the Ruderman Family Foundation.

For more than two decades, the Ruderman Family Foundation has undertaken multifaceted efforts to solidify Israel’s relationship with American Jewry with culinary traditions representing the latest vehicle in this mission. Such activities have included the Knesset Caucus for Israel-American Jewry Relations, which aims to elevate the concerns of American Jews within the Israeli legislature’s deliberations; University of Haifa’s Ruderman Program for American Jewish Studies, a master’s degree that covers a wide range of issues pertaining to American Jewish life and American society; conferences such as the annual Symposium for the Professional Community in Israel; and research efforts that provide thought leaders and decision-makers the data needed to properly understand the current trends in Israel-American Jewry relations.

Further, the video series on the American Jewish food scene builds off the momentum generated in June with the foundation’s launch of the Third Generation online series, which introduces candid conversations between American and Israeli grandparents with their grandkids, introducing the generational gaps and point of views on Jewish life and Israel. Now, the newly launched food video series expands viewers’ journey into the diversity and uniqueness of American Jewry through the avenue of food-related stories.

Republish this article
About The Publishers
Ruderman Family Foundation
Publish your organization's press release on JNS Wire
Releases published on the JNS Wire are communicated and paid for by third parties. Jewish News Syndicate, and any of its distribution partners, take zero responsibility for the accuracy of any content published in any press release. All the statements, opinions, figures in text or multimedia including photos or videos included in each release are presented solely by the sponsoring organization, and in no way reflect the views or recommendation of Jewish News Syndicate or any of its partners. If you believe any of the content in a release published on JNS Wire is offensive or abusive, please report a release.
Never miss a thing
Get the best stories faster with JNS breaking news updates