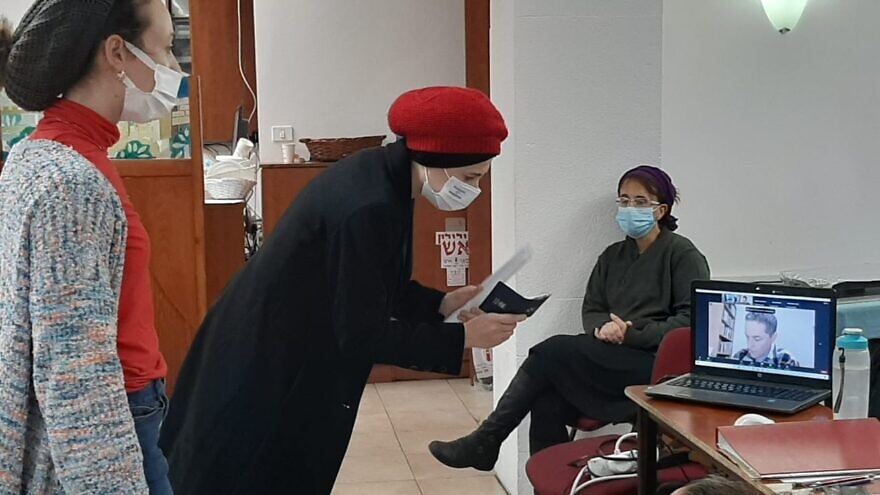 (January 19, 2022, Jerusalem, Israel, JNS Wire) The daring, danger and drama of the Soviet Jewry struggle is coming to the Jerusalem stage. The drama has also permeated the off-stage arena, where the theater company has rehearsed around absentee cast and crew who tested positive and those in quarantine.

Despite Omicron, the Women’s Performance Community (WPC) of Jerusalem and OU Israel continue to plan for a late-February premiere of the historical musical, “WHISPER FREEDOM: The Soviet Jewry Struggle,” in Jerusalem and Beit Shemesh.

Co-producers Sharon Katz and Avital Macales are following Hebrew University’s COVID research team, who believe that the Omicron wave will end at the last week in January.

After a stressful month, Katz and Macales are confident that audiences will be eager to return to the theater. With masks and all MOH precautions, the cast of “WHISPER FREEDOM” is currently rehearsing twice a week – singing, dancing, and ending the isolation forced upon the public by the COVID-climate.

Through “WHISPER FREEDOM,” the WPC Jerusalem reignites the memory of a monumental time in modern Jewish history that many people today are not even aware of — the Soviet Jewish struggle for freedom and identity. Its historical musical spotlights the refuseniks (Russian Jews who requested an exit visa but were refused) who were willing to risk their personal liberty for the freedom to live and, ultimately, leave as Jews.

Driven forward by Soviet Jewish activists, refuseniks, Hebrew teachers, prisoners of Siberia and their supporters throughout the world, more than one million Soviet Jews won their freedom. “WHISPER FREEDOM” is their story.

Co-authors/composers Katz and Macales spent more than two years researching “WHISPER FREEDOM” through in-person interviews with refuseniks and Soviet Jewry activists, plus dozens of history books and autobiographies by Prisoners of Zion.

“WHISPER FREEDOM” is the third epic-themed musical by Katz and Macales, and from production team of The Women’s Performance Community of Jerusalem and OU Israel. It follows the highly successful “Count the Stars” (2016) and “Hidden: The Secret Jews of Spain” (2018). The pandemic delayed “WHISPER FREEDOM” by two years. Katz and Macales are hopeful that in the next six weeks, their show will take the stage.

Profits from the production will benefit teens at risk through an OU Israel youth program.

The show will perform in Jerusalem and Bet Shemesh under MOH guidelines. It premieres on Sunday, February 27 at the IASA Theater in Givat HaMassua. It will be performed in English with Russian and Hebrew surtitles.

Republish this article
About The Publishers
Women’s Performance Community of Jerusalem
Publish your organization's press release on JNS Wire
Releases published on the JNS Wire are communicated and paid for by third parties. Jewish News Syndicate, and any of its distribution partners, take zero responsibility for the accuracy of any content published in any press release. All the statements, opinions, figures in text or multimedia including photos or videos included in each release are presented solely by the sponsoring organization, and in no way reflect the views or recommendation of Jewish News Syndicate or any of its partners. If you believe any of the content in a release published on JNS Wire is offensive or abusive, please report a release.