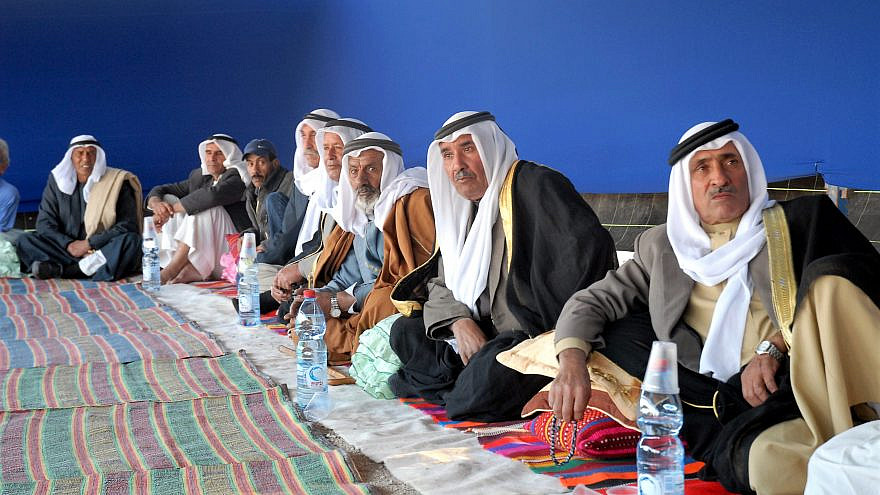 (June 14, 2021 / JNS) Israel’s newly sworn-in Prime Minister Naftali Bennett has many landmines to avoid. One concerns land issues in Israel’s Negev Desert, specifically whether he will rein in unregulated Bedouin settlements that some say threaten to overwhelm Israel’s land reserves in the south.

“Bennett is selling the Negev!” was one of the first broadsides hurled against the new premier by Benjamin Netanyahu, who attempted to use the issue as a last-ditch effort to peel away right-wing members from the Knesset’s vote of confidence in the government on Sunday. He claimed that Bennett would hand control over parts of the south to the Ra’am Party—the first Arab party to agree to join an Israeli government. The Bedouin make up an important part of Ra’am’s base, and one of their key voting issues centers on illegal housing.

The Negev—and the Bedouin who make up 25 percent of its population—has long been a political football in Israeli politics, although it’s often pushed to the backburner. Israelis think of the desert area as its “Wild West,” a place where Israeli sovereignty is more honored in the breach, and where there are concerns over crime and national security. For the government, the biggest challenge is bringing to heel unregulated Bedouin building on state lands. The Bedouin are spreading rapidly because they are growing rapidly; they have one of the highest birthrates in the world, in part due to polygamy. Designated a crime in Israel, it is largely unheeded by the Bedouin. A 2012 Tel Aviv University study found that one-in-three Bedouin men have at least two wives.

“They have families with sometimes 30, 40, even 50 children. … When they’re grown, they have to build somewhere, and this is the recipe for the illegal houses that we have in the thousands in the Negev,” said Kobi Michael, senior researcher at Tel Aviv’s Institute for National Security Studies and editor of the institute’s periodical “Strategic Assessment.”

The Negev’s Bedouin population stands at about 270,000. In 1948, at Israel’s founding, it was 10,000. More than 75 percent of Bedouin live in recognized towns and cities. The rest live in illegal settlements, part of what Israelis simply call the pazurah (or “dispersion”), which also includes isolated outposts made of ramshackle structures dotting the landscape as far as the eye can see.

In the newer parts of the “dispersion,” the homes are separated by distances of half a kilometer or more. In older parts, buildings are clumped closer together, having been built up over time. Naomi Kahn, international division director of Regavim, an Israeli NGO that specializes in land issues and has been at the forefront of the fight to regulate Bedouin communities in the Negev, says much of the area in question will eventually be densely built as the Bedouin population doubles about every 15 years. 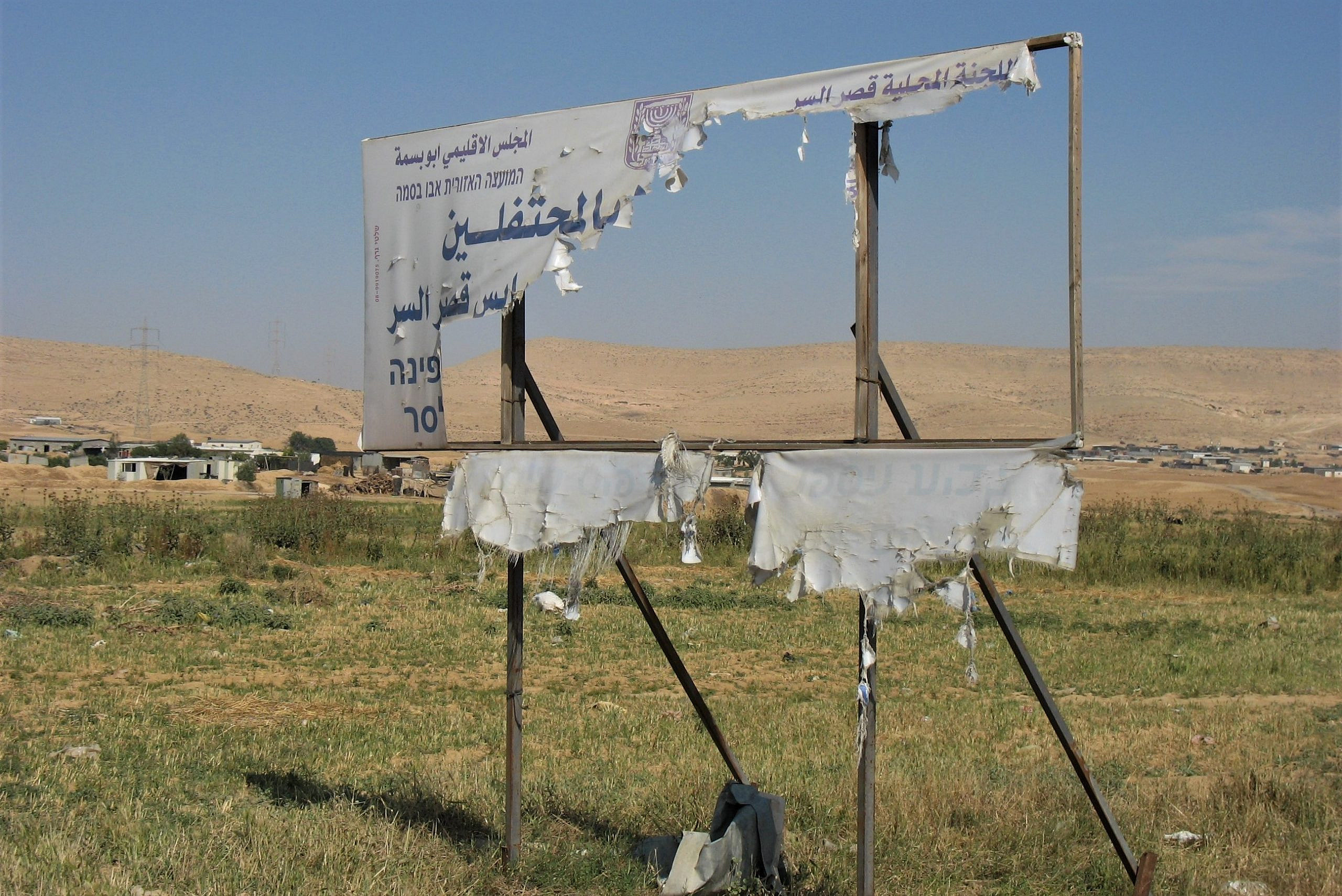 Regavim argues that illegal Bedouin building must be curtailed on grounds of sovereignty and sustainability. Regarding the former, Kahn says Israel is a modern state of which Bedouin are full citizens and therefore subject to its rules. However, they have long behaved according to the manner of their nomadic culture and tradition, even as they enjoy state benefits. (Ironically, the state subsidizes Bedouin polygamy by paying welfare to second and third wives, who are registered as “single mothers.”)

From a sustainability point of view, the Bedouin expansion is poor land use writ large. The Bedouin have made 3,200 individual property claims covering an area “the size of Jerusalem, Tel Aviv, Beersheva and Haifa combined,” argues Kahn. “The Negev is almost 70 percent of Israel’s available land reserves. There isn’t that much land other than the Negev to talk about building new communities for anyone in the future.”

In 2010, Regavim developed a plan to organize Bedouin settlement—a combination of curbing illegal construction, reaching compromise arrangements with the Bedouin and exhausting the housing potential of existing settlements. “There are already 16 Bedouin-only communities in the Negev,” says Kahn. “They have massive empty spaces that are available and are given free to Bedouin.” 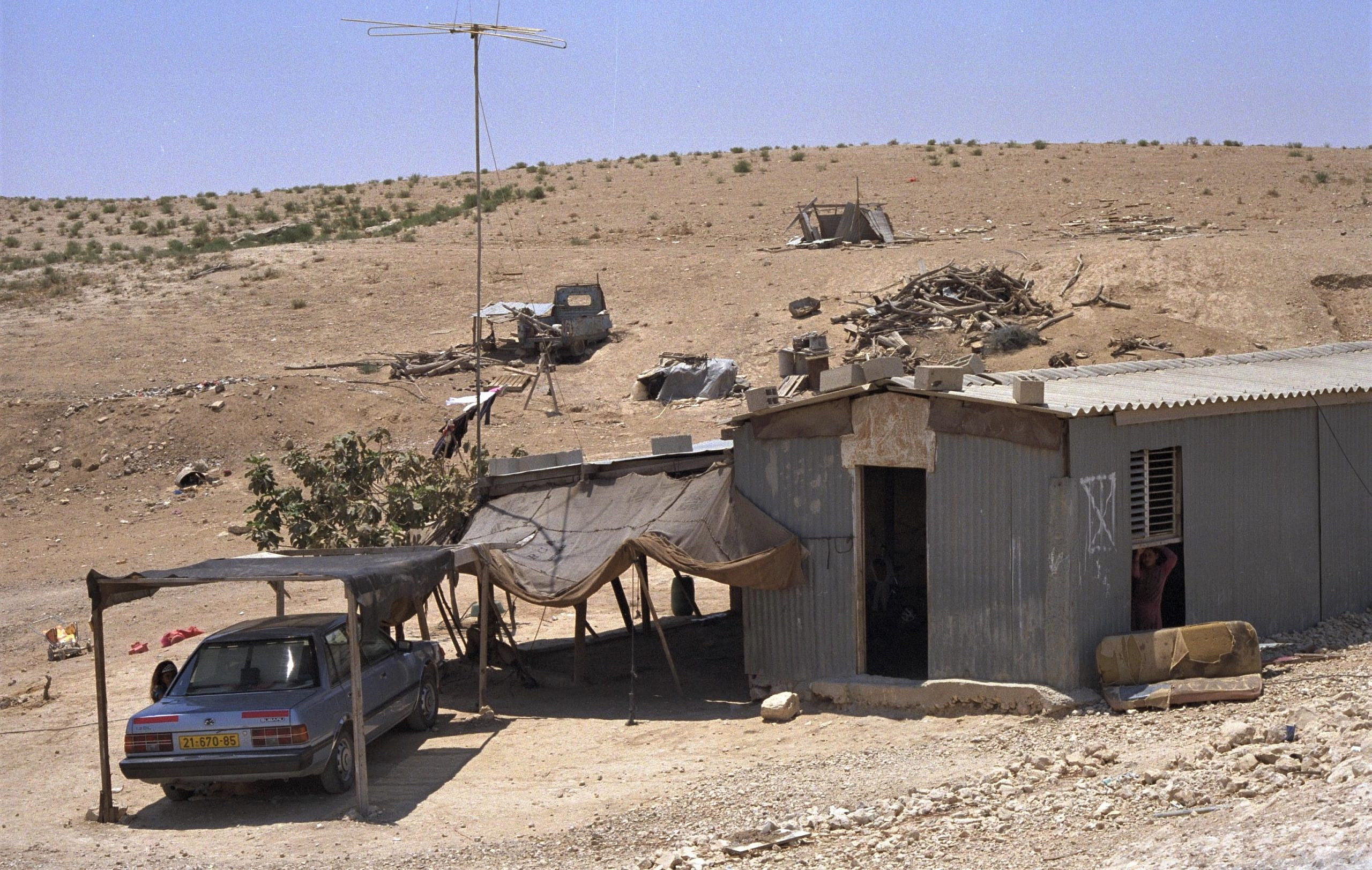 Typical housing put up by the Bedouin (here, near the southern city of Arad on the border of the Negev and Judean deserts), which is problematic for the Israeli government in terms of laying sewer pipes, water lines, electric cables and other services. Credit: Marcus Yuval/GPO.

The government insists that it’s making progress on the Bedouin issue, and there have been substantial efforts to integrate them into the larger working society over the years. Ben-Gurion University of the Negev has programs in place to recruit Bedouin students, particularly women, especially in the medical field so they can elevate health care among their community. Edan HaNegev (“Era of the Negev”), a large industrial park, is being built near Rahat, the largest Bedouin city in the Negev with a population of more than 70,000. Of the 50 entrepreneurs developing projects at the park, 65 percent are Bedouin. SodaStream is already operating a large factory there that employs hundreds of Bedouin workers.

Emad El-Sana, director-general of Edan HaNegev, says the industrial park is about more than just employment; it’s a place to help Bedouin women find work—not something that’s “taken for granted” in traditional Bedouin culture. “It’s also a space for Jews, Arabs and Bedouin to interact … a meeting place of different cultures.”

However, Yair Maayan, director-general for Israel’s Authority for Development and Settlement of the Bedouin in the Negev, tells JNS that the process of convincing Bedouin to change their lifestyles and move to regulated areas takes time. “The residents need to agree to it,” he says. “It takes years for them to get used to the idea.”

Maayan’s department—responsible for designing, planning and developing new Bedouin neighborhoods and communities—has built 30,000 housing units in the last five years with plans for 100,000. “We are in dialogue with several thousand families to transfer to the new neighborhoods,” he says.

He is optimistic that Israel will solve the problem and that things are moving in the right direction, though “we need to pick up the pace.” He also notes that the department needs a bigger budget. 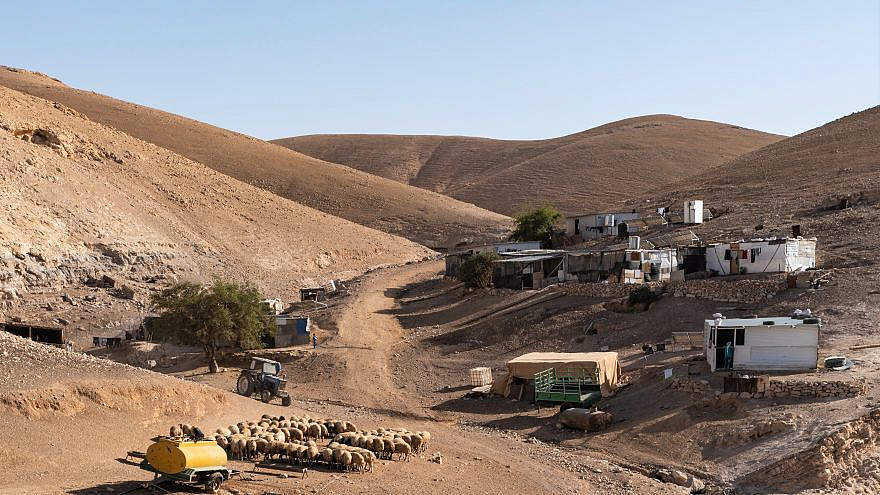 A flock of sheep in a Bedouin camp in the Judean Desert. Photo by Dario Sanchez/Flash90.

For many activists, the Netanyahu government’s efforts were underwhelming. Kahn agrees, saying “he talked the talk, but didn’t walk the walk.”

In fact, it’s something Bennett used in his riposte to Netanyahu’s attack. “The truth is that Netanyahu is the one who sold the Negev during his 12 years in power to illegal building, to violence, to [paying] protection, to break-ins at [Israel Defense Forces] bases and to a huge loss of sovereignty,” Bennett said in a June 6 speech.

However, elements of the coalition deal with Ra’am, signed Friday, raise concerns. It calls for the extension of a freeze on illegal-housing demolitions until 2024, the recognition of three new Bedouin settlements and a promise to address the rest of the illegal Bedouin settlements in nine months.

The freeze on demolitions of illegal structures is “legislating lawlessness,” says Kahn.

Maayan agrees that freezing enforcement is a mistake, saying that “it doesn’t solve the problem; it exacerbates it. Because while enforcement is frozen, the illegal building continues, only worsening the situation.”

Kahn also takes issue with recognizing three new settlements, which she says involves 11,000 dunams, about 2,700 acres. “What they want to do is just take a pencil and take a map, and draw an arbitrary circle around some of these clusters and turn them into a ‘community,’ ” she said. “Again, this is legalizing communities of already standing structures, meaning no infrastructure. There are places where the State of Israel has already tried to retroactively recognize such settlements and they have been abject failures.”

What happens is that Israel then faces unfair accusations of failing to provide the Bedouin with basic services, she says. After all, “if you have buildings that are already standing that were built without any thought as to sewage, electricity and communication lines, you can’t go back and lay them underneath.” 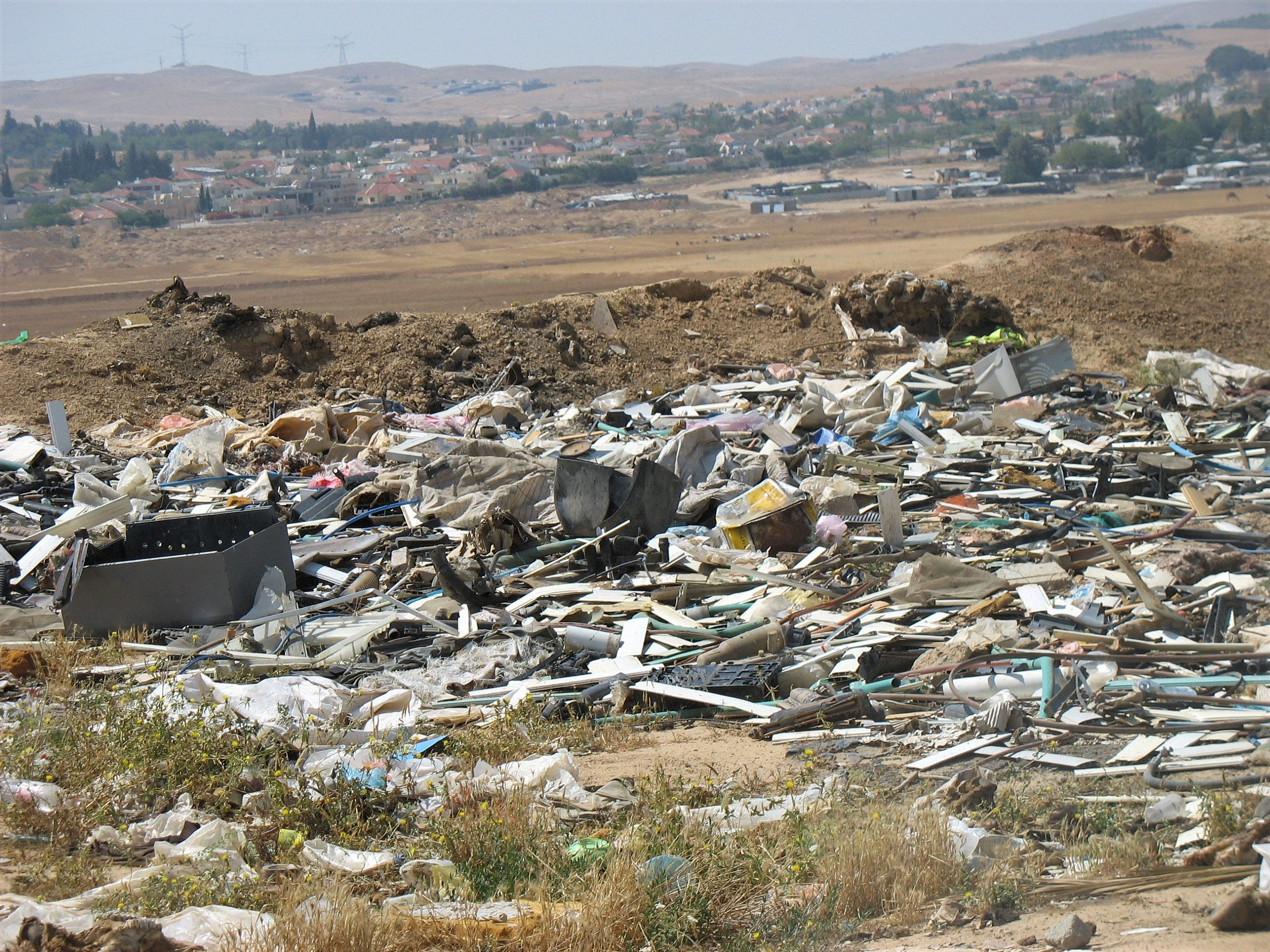 Not all agree with Regavim’s position. Professor Oren Yiftachel, a member of the department of geography and urban development at Ben-Gurion University, as well as an urban planner who also describes himself as an activist, says the Israeli government is using its planning arm as a political tool to oppress the Bedouin.

“The government is trying to uproot them and concentrate them in towns, in localities that will supposedly free up land, Judaize the land, and this is deeply objectionable,” he states.

He dismisses terms like “selling” or “losing” the Negev. “It’s a racist statement,” he says. “They are the original sons of the Negev. So you’re not losing anything.”

Yiftachel led a team that developed its own “Master Plan for Unrecognized Bedouin Villages in the Negev” in 2012. The project was funded by the European Union. It calls for recognizing and developing all Bedouin villages, of which there are 46 (of those, Israel refuses to recognize 35).

Kahn rejects Yiftachel’s numbers, saying the true extent of land that the Bedouin claim is not 5 percent of the area of the Negev, but rather 23 percent. 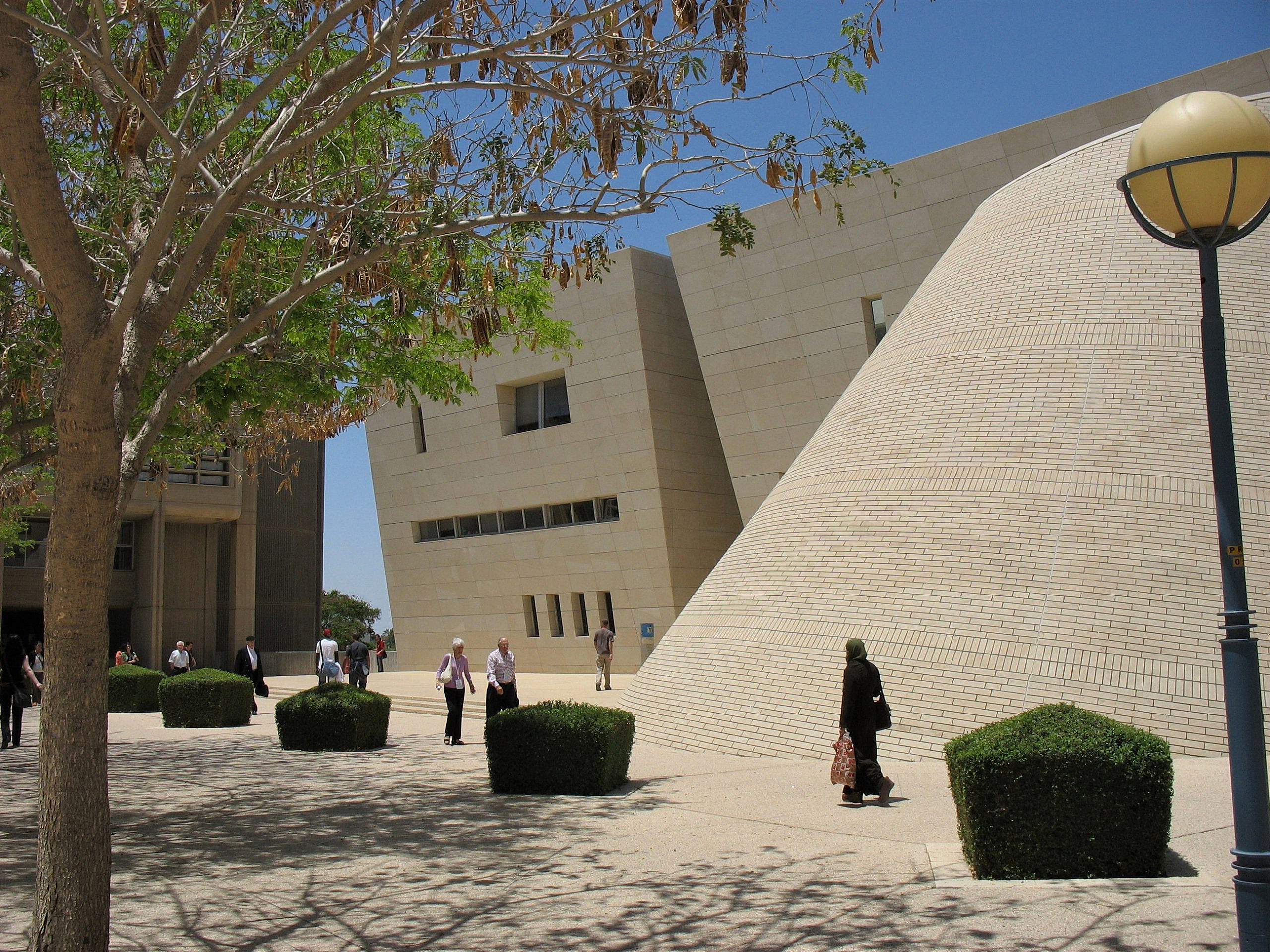 A Bedouin student at Ben-Gurion University of the Negev in Beersheva. Photo by Carin M. Smilk.

Kahn, along with INSS’ Michael, also disputes Yiftachel’s assertion that the Bedouin are indigenous.

“They are not the original inhabitants. They claim to be, but most of them are not,” notes Michael.

Kahn adds that “they came up from the Arabian Peninsula, some of them about 100 years ago, some of them about 125 years ago. There were Bedouin in this area, but they weren’t these Bedouin. These ones actually pushed out the tribes that were here before, who were registered under the Ottoman Empire and the British Mandate.”

Of most concern is that “losing the Negev” is a danger that shouldn’t be dismissed, explains Michael, based on trends among the Negev Bedouin that have implications for Israel’s national security. The Bedouin are located between the Gaza Strip and the south Hebron area, acting as a bridge between the two. They increasingly identify with Palestinian national aspirations. Others have embraced extremist Islam. “We find ourselves with a very big population which has become more and more radical.”

“Most of the Bedouin are peaceful people. The problem is with the marginal groups that are very influential and very dangerous. They are responsible for the crime, the security problems,” he says. “They are the ones setting the tone.”