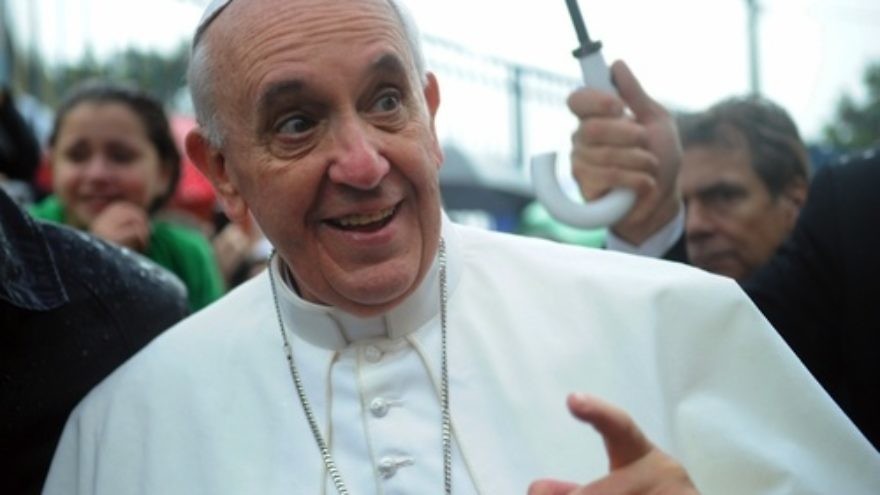 (October 17, 2013 / JNS) With the backdrop of positive steps on Jewish-Catholic relations under Pope Francis I, more than 50 leaders from both faiths gathered in Madrid, Spain, on Oct. 13 for the International Catholic-Jewish Liaison Committee (ICJLC) summit to further religious cooperation.

The ICJLC, the official Catholic-Jewish dialogue group, was formed in 1967 shortly after the Second Vatican Council’s groundbreaking declaration Nostra Aetate, which disavowed centuries of Catholic Church anti-Semitism and paved the way for improved Catholic-Jewish relations.

According to a statement issued after the summit, “Challenges for Religion in Contemporary Society,” the gathering addressed issues “in a series of presentations, discussions and workshops on the social, political, cultural, ethical, and religious circumstances in which men and women today seek to express their religious beliefs and follow the teachings of their religious traditions.”

JNS.org spoke to Betty Ehrenberg, chair of the International Jewish Committee for Interreligious Consultations (IJCIC) and representative of the World Jewish Congress on the committee, about her recent appointment as the head of the IJCIC, her experience at the summit in Madrid, and the future of Jewish-Catholic relations.

As the new head of IJCIC and the first woman to hold position, what are some of your responsibilities, and what goals do you hope to achieve?

“My most important goal is to try and help guide the group to deepen the dialogue with other religious faiths. In addition to the meeting with the Catholic Church in Madrid, we recently met with leaders of the Orthodox Christianity in Greece and plan to attend a meeting with the World Council of Churches in South Korea later this year. I feel that is my responsibility—to try to increase as much as possible contacts with different faiths.

“I also feel that it is very important to get younger Jews involved in this type of dialogue. I hope that we can teach young Jewish leaders to develop these types of friendships and skills of communication.”

What were some of the major topics discussed at the recent summit in Madrid?

“Many of the major topics that were discussed were issues that both faiths have in common: combating racism, extremism, and violent attacks on religious institutions.

“The issue of religious freedom was an extremely important topic as well. We discussed recent efforts [by some European countries] to curtail kosher slaughter or legislation outlawing male circumcision, as well as prohibitions by some countries against wearing religious symbols such as the kippah, Magen David or even crosses.

“Both groups [Jewish and Catholic] are also deeply concerned with the continuity of their faiths and youth involvement. We shared some of our ideas on how to involve younger people.”

Were there discussions on the Middle East, the Arab-Israeli conflict, or persecution of Christians in the region?

“We did not have a direct discussion of the Arab-Israeli conflict. But we did discuss attacks on faiths in the Holy Land, persecution of Christians in the region, and radicalization. However, this was not only limited to the Middle East; we had an across-the-board discussion of extremism on the far left and right.”

What other agreements or initiatives came out of the summit?

“We discussed the upcoming 50th anniversary of Nostra Aetate and how we can mark this. While the Catholic community in the West, especially the United States, is well aware of Nostra Aetate and the healthy relationship with the Jewish people, there are still many communities around the world where it is not well known, and we feel it needs to be taught more in Catholic schools, seminaries and churches.”

Since taking office, Pope Francis has made a number of positive statements concerning Judaism, such as praising Jews for “keeping their faith in God” and saying that a true Christian “cannot be anti-Semitic.” He has also met with Jewish leaders (including yourself) several times and even made history by spending Sukkot with his Jewish Argentinian friend Rabbi Abraham Skorka. Having met Pope Francis, what do you think of him and how does he compare to his predecessors?

“Also, as the first pope from Latin America, he has a different view on the world. However, it is tough to really compare [him with previous popes]. Pope Benedict took steps in improving relations and visited Israel. Pope John Paul II also achieved a great deal, such as the establishment of diplomatic relations with Israel—which we considered a historic breakthrough. We believe that it is very important to have a continuation of this and think that Pope Francis will be an outstanding influence on Catholic- Jewish relations.”

With Catholic-Jewish relations at a historically high level, what’s next? What would you like to see more progress on?

“I would like to see more progress on a fight against religious discrimination of all forms, including anti-Semitism. Religious extremism has resurfaced in recent years globally and we need to address this. We should be able to work more to speak out against anti-Semitism, persecution of Christians and end any efforts to curtail religious freedom. When you have strong friendship and understand each other’s concerns, like we now do with the Catholic Church, we are seeing a great chance to work together for common ground on these issues.”