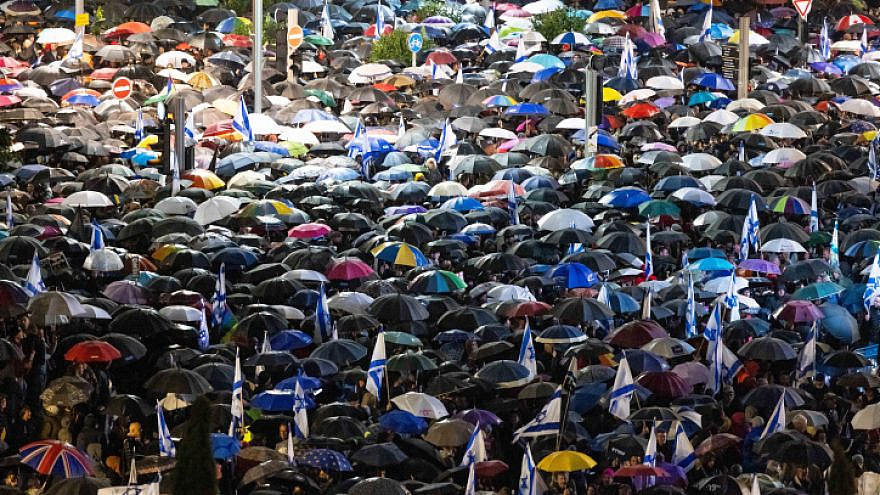 (January 15, 2023 / JNS) An estimated 80,000 to 100,000 Israelis took to the streets on Saturday evening for demonstrations in Tel Aviv, Haifa and Jerusalem against the proposed legal reforms of the Netanyahu-led government.

“We came out to protest against the attempt to turn Israel into a dictatorship. We will come next week, in two weeks and in three,” said Roee Neuman, spokesman for the Black Flags movement, one of the protest organizers, Channel 12 reported.

Nadav Galon, the spokesman for “Crime Minister,” another protest group and organizer, added: “This is an opening shot for civil resistance. We will demonstrate every week. We will surprise the decision makers. … We will also carry out surgical protest actions outside ministerial buildings as well as large demonstrations like tonight.”

Former Foreign Minister Tzipi Livni said at the demonstration, “The government of Israel went to war against the democratic institutions themselves, in order to rule without restraints. No debate, no legitimate criticism—political takeover. No, elections do not give the power to destroy democracy itself.”

The protest is the second in two weeks. Last Saturday night, roughly 30,000 protesters gathered in Tel Aviv’s Habima Square, also spurred by the government’s legal reforms, which Prime Minister Benjamin Netanyahu has defended as necessary to strengthen “all of our systems, democracy and the rule of law, that are dependent on the correct balance between institutions.”