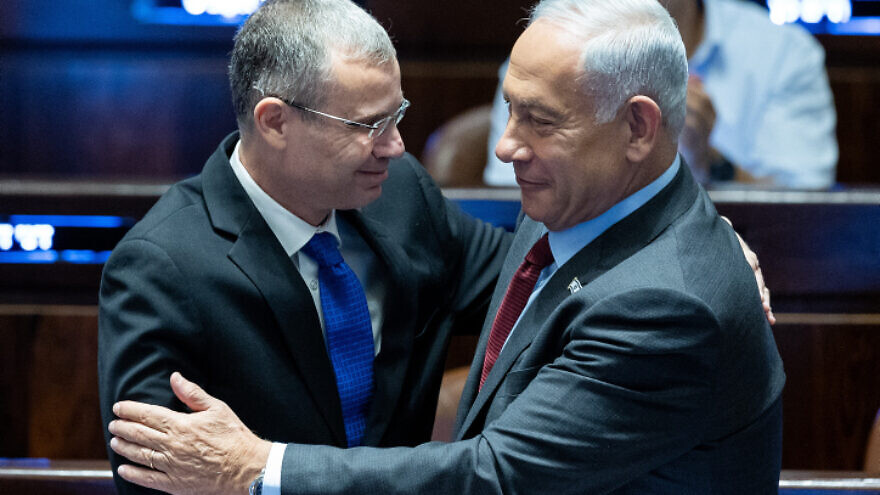 (January 12, 2023 / JNS) Israeli Justice Minister Yariv Levin on Wednesday published a draft of his judicial reform bill. The proposed legislation, presented as an amendment to Basic Law: The Judiciary, has not yet been put before the Knesset.

The bill includes an “override clause” that would enable the Knesset, with a majority of 61 members, to reverse Supreme Court decisions to overturn legislation. It would also change the way judges are appointed, giving the majority on the selection committee to elected officials. In a related change, the bill calls for High Court judges to be appointed in a public hearing.

Third, the bill eliminates the legal justification of “lack of reasonableness,” which critics argue is legally vague and has been used by the court to mean whatever it likes.

Opponents of the bill decried the proposed changes as a threat to democracy that will cancel Israel’s system of checks and balances. Israeli President Isaac Herzog met with Levin on Wednesday night and asked him to soften the reforms, suggesting a joint dialogue, according to Channel 11.

Israeli Prime Minister Benjamin Netanyahu on Wednesday defended the proposal, arguing that instead of weakening the judicial system, it would be “strengthening all of our systems, democracy and the rule of law, that are dependent on the correct balance between institutions. This balance that we find in all countries across the world has been somewhat broken in Israel, and we have to return it in a responsible way and that’s what we will do.”

Herzog on Tuesday appealed to politicians and the general public to tone down the rhetoric amid threats that the judicial reform proposal will ignite a “civil war.”

“During recent days, I have held discussions with many parties and I am doing everything in order to create a respectful atmosphere and dialogue, in the hopes of reaching a broad understanding. I appeal to you, elected officials and citizens of Israel from the entire public and political spectrum: Show restraint and responsibility. We must … lower the flames. We have no other country,” he tweeted.

Lapid on Monday called the government’s proposed judicial reforms an “extreme regime change” and vowed to continue fighting in streets across the country in “a war over our home.”

His comments were echoed by Gantz, who said: “If you [Netanyahu] continue the way you are going, the responsibility for the civil war that is brewing in Israeli society will be on you.”