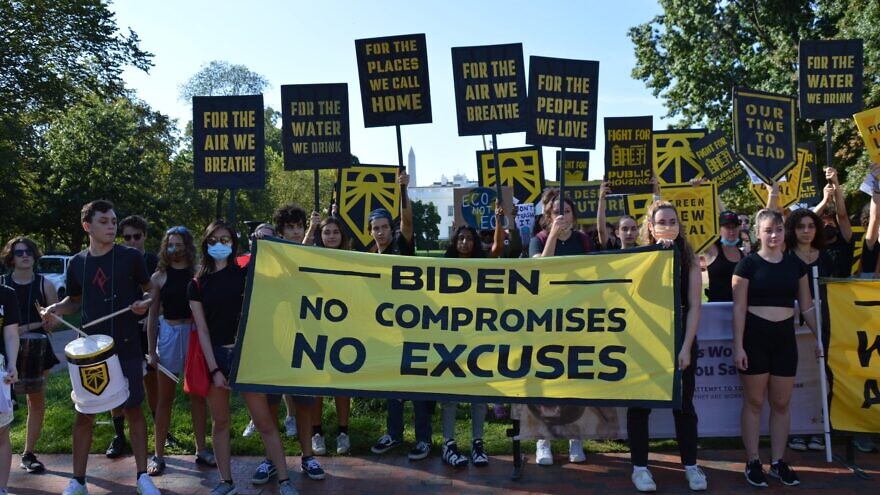 (October 22, 2021 / JNS) An affiliate of the Sunrise Movement at George Washington University, Sunrise GW, has disavowed a move by another local affiliate, Sunrise DC, to boycott a voting rights rally over the participation of three Jewish groups.

In a statement, Sunrise GW said that it “unequivocally condemns” the decision by Sunrise DC.

Further, Sunrise GW said that it does not support a “litmus test on Jewish students” to be part of its movement and is instead focused on “ending the era of fossil fuels, winning a Green New Deal and creating millions of good jobs in the process, and making GW a world-leading institution in the fight against climate change.”

Sunrise GW has also offered to take the place of Sunrise DC at the rally.

Earlier this week, Sunrise DC tweeted a statement saying it has declined its speaking slot at Saturday’s Freedom to Vote Relay‒Rally at the Finish Line because of the inclusion of Jewish organizations. The statement singled out the Jewish Council on Public Affairs, the National Council of Jewish Women and the Religious Action Center of Reform Judaism, which are scheduled to participate at the rally as these groups support Zionism and the State of Israel.

In addition to the Sunrise GW affiliate condemnation, the Sunrise Movement national group said that it was unaware of the statement from Sunrise DC, and that the group rejects “all forms of discrimination, including anti-Semitism and anti-Palestinian racism.”

Nevertheless, the national Sunrise Movement stopped short of fully condemning its affiliate’s decision and stood behind support for the Palestinians, saying that it “will always welcome anyone who acts on our principles and chooses to join the fight for collective liberation. We believe that the rights of Palestinians are a part of that struggle and are committed to embracing that struggle together.”