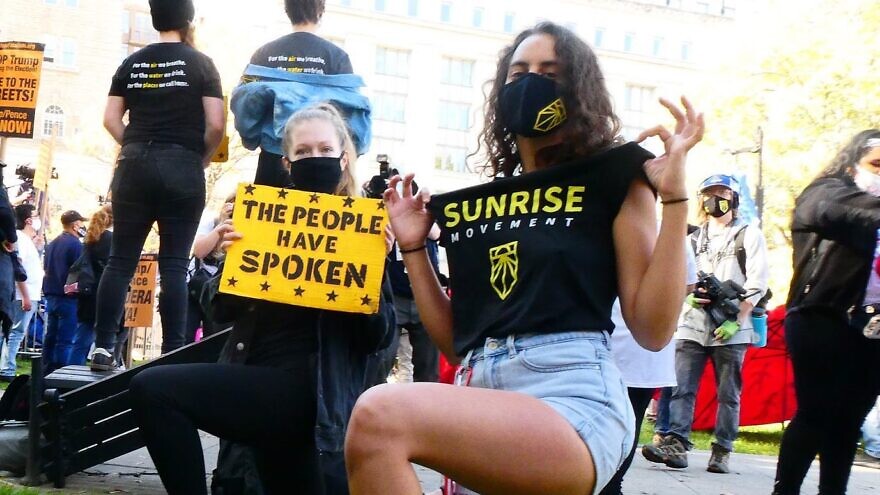 (October 21, 2021 / JNS) A left-wing climate activist group in Washington, D.C., infuriated the pro-Israel community this week, pulling itself from speaking at a rally for voting rights set for this weekend and citing the participation of three Jewish groups as the reason.

Sunrise DC, an affiliate of the national group the Sunrise Movement that aims to organize youth to protest against climate change, tweeted a statement on Wednesday stating that it has declined its speaking slot at Saturday’s Freedom to Vote Relay‒Rally at the Finish Line because of the inclusion of Jewish organizations. The statement singled out the Jewish Council on Public Affairs (JCPA), National Council of Jewish Women and the Religious Action Center of Reform Judaism (RAC), which are scheduled to participate at the rally as these groups support Zionism and the State of Israel.

“Given our commitment to racial justice, self-governance and indigenous sovereignty, we oppose Zionism and any state that enforces its ideology,” the group wrote in a statement it published on Twitter.

“Israel, in its occupation of the land of Palestine and its people, has and continues to engage in violent oppressive tactics that go against the values we advocate for as a hub,” continued the statement. “As a colonial project, Israel routinely displaces Palestinians through the construction of settlements and the wholesale theft of homes and land. It also treats all Palestinians, as well as black and brown Jewish-Israelis, as second-class citizens who have virtually no responsive representation in government, often subjecting them to extreme policing and brutality. In fact, Palestinians living in Gaza and the West Bank cannot vote in Israel, despite the fact that these territories are occupied and effectively governed by the state. We stand with the people of Palestine and not with those who defend Israeli violence against them. We also believe that the fight for statehood and sovereignty are incompatible with Zionism and the political erasure of Palestinians that the ideology calls for.”

The rally is being held in support of the Freedom to Vote Act, the John Lewis Voting Rights Advancement Act and D.C. statehood by the Declaration for American Democracy Coalition, with some participants walking or biking from West Virginia to the rally location at the north end of the U.S. Capitol.

In its statement, Sunrise DC called for Declaration for American Democracy to consider removing the three Jewish groups from its member list, as it believes “Zionism is incompatible with statehood and political sovereignty.”

The statement was quickly derided by Jewish groups—most that are politically left-wing—and Sunrise DC has since changed its Twitter account to private.

Two Jewish organizations that are part of the coalition were not mentioned by the organization: Americans for Peace Now and the Workers Circle, which both support a two-state solution to the Israeli-Palestinian conflict, as do the groups mentioned by Sunrise DC.

“Sunrise Movement DC is refusing participation in a voting rights rally because of the presence of ‘Zionist organizations.’ This is the vilification of Jewish nationhood and a litmus test for all who support it. This is anti-Semitic—plain and simple,” tweeted Anti-Defamation League national director and CEO Jonathan Greenblatt. “The [RAC, NCJW and the JCPA] all provide invaluable services and support to the Jewish community, and vilifying them is nothing short of disgraceful. ADL fully supports these organizations and is thankful to have them as an ally in the fight against hate.” 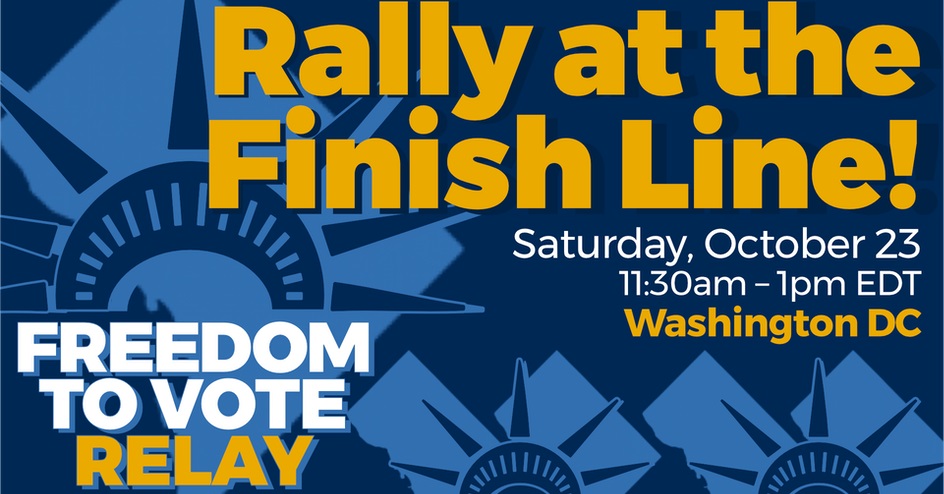 ‘Hampers our ability to advocate for justice’

“That statement is the circular firing squad the right wants. What they want are organizations aligned around social and environmental justice to be feuding about other things. And so when a statement like this is put out, it just underscores what happens when progressive groups are fighting each other instead of the underlying injustices that they care about,” he said.

“We’ve become our own biggest enemy, and we think that excluding partners from this rally or event—any type of effort—many of their partners are generally committed to fighting for social justice and saving our planet,” he added. “I mean that only hurts us and hampers our ability to advocate for justice anywhere and in any form.”

While he urged Sunrise DC to reconsider, he felt that there was little chance the rally organizers are going to follow through with Sunrise’s suggestion to remove the Jewish organizations from its membership.

“These groups, each of them that are named in the Sunrise statement are working on important issues—NCJW is working on women’s issues and abortion justice, and the Religious Action Center, which works on a whole range of issues and has been a leader in civil-rights issues for decades and represents the Reform Movement, which is the largest movement in Judaism. And the JCPA, which is the umbrella organization for many Jewish Community Relations Councils and … has been leading efforts on criminal justice reform. These all are important issues, and it really undercuts our ability to advance them when we’re dividing each other over the issue of Israel.”

Neither Sunrise DC, its umbrella organization Sunrise Movement or Declaration for American Democracy have yet released any statements on the controversy.

“This move by the Sunrise Movement, a prominent organization dedicated to combating the dangers of climate change, is a brazen political power move. By making this decision, it is attempting to intimidate the organizers of the Freedom to Vote Rally into banning these Jewish organizations,” the group said. “This is deeply dangerous, as American Jews have fought for civil rights, civil liberties, the separation of church and state, and multiple other positions that have helped to make America a more just society. We American Jews have an equal right to share our voices, just as all Americans do. Silencing our voices, as the Sunrise Movement demands, is the antithesis of democracy.”

The Jewish Community Relations Council (JCRC) of Greater Washington also put out a statement on Thursday, saying they were outraged at the situation and called the statement anti-Semitic, as the Sunrise DC’s opposition to Zionism is “a fundamental denial of the Jewish self-determination.”

“We have advocated for stronger state voter access laws and fought anti-democratic efforts to disenfranchise marginalized voters. At the same time, we have proudly advocated for the safety and security of the State of Israel, and for the advancement of a two-state solution that would allow both Israelis and Palestinians to live peacefully alongside one another,” said the statement. “Rather than being contradictory, these struggles are aligned in their commitment to dignity, freedom and respect for all people.

“It is regrettable that Sunrise DC has injected division, acrimony and hatred into a powerful movement that is uniting Americans from all backgrounds and walks of life to defend our democracy, including over 60 American Jewish organizations,” it continued. “We condemn Sunrise DC’s suggestion that American Jews who support the right of the State of Israel to exist and flourish be excluded from the civic movements that embody our Jewish values, and that we have led and participated in for so long. We must not allow gratuitous, hateful grandstanding to fracture this critical national coalition at such a pivotal moment for our nation.”