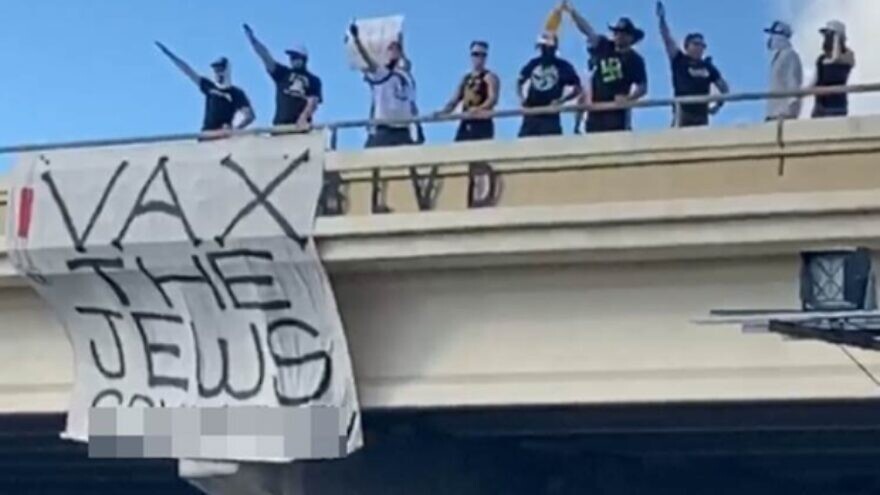 (October 24, 2022 / JNS) Jewish groups in Los Angeles are speaking out after a banner was placed on the heavily trafficked Interstate 405 freeway reading “Kayne is right about the Jews.”

The banner was hung by members of the Goyim Defense League and was a reference to recent statements by performer Kayne West, also known as Ye, promoting anti-Semitic canards such as that the Jews control the media. West also said he would go “death con 3” on Jewish people.

A second banner said, “Honk if you know.” A third banner promoted a platform that streams content operated by the Goyim Defense League. Several activists were seen making Hitler salutes on the overpass on Saturday.

The Goyim Defense League has previously hung banners from overpasses in Los Angeles and Texas, and its members have left anti-Semitic flyers on driveways in cities across the United States.

“We are aware of the despicable and vitriolic sign posted on the 405 Freeway,” the Jewish Federation of Greater Los Angeles said in a statement. “The group responsible is known to us and our Community Security Initiative for espousing anti-Semitism and white supremacist ideology. We are monitoring them and sharing information with local law enforcement, coordinating with the mayor’s office and other local elected officials, and working with our partners at the ADL.

“We will continue to stand together in combating anti-Semitism in Los Angeles and these actions will not divide us but serve only to bring us closer together,” the statement continued.

Jeffrey Abrams, regional director of the Anti-Defamation League, said, “This is an outrageous effort to fan the flames of anti-Semitism gripping the nation. This group…is now leveraging Ye’s anti-Semitism and is proof that hate breeds more hate. Decisive action against anti-Semitism by Adidas is long overdue.”

Adidas, the maker of sneakers, clothes and other apparel, has a promotional deal with West. Despite numerous calls and petitions from many, Adidas has not withdrawn its deal with the performer.

The banner was not the only incident of hate in Southern California this weekend. Anti-Semitic flyers were once again left in front of homes in Beverly Hills.

Lili Bosse, the mayor of Beverly Hills, told JNS, “These disgusting and evil acts of blatant antisemitism and Jew hatred hits me to the very core and fiber of my being. As a daughter of a survivor of the Auschwitz death camp, I will always bear witness and speak loudly without fear. While this is being described as free speech, this is hate speech that is meant to divide us and intimidate us. We must stand united and stronger than ever. This is about humanity. I believe every religion, every culture and every race must drown out this hate that is evil darkness. We are stronger than hate. We will never be silenced. Hate will never win.”