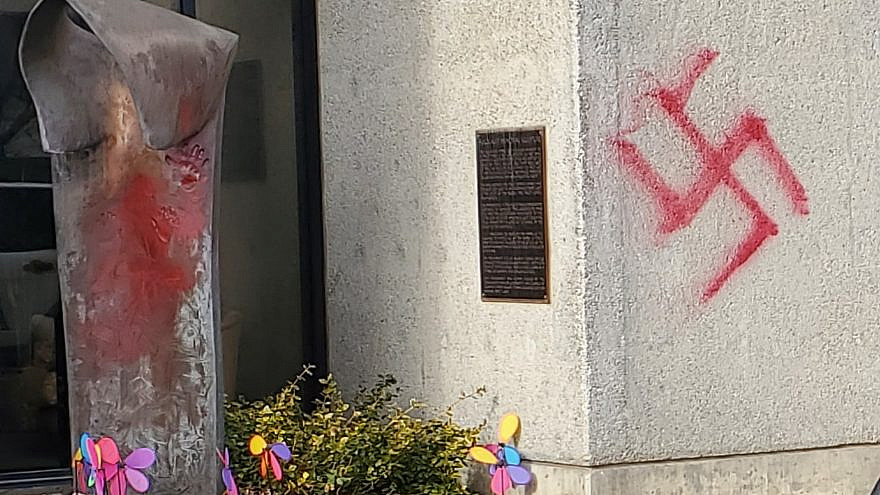 (February 9, 2021 / JNS) Police in Spokane, Wash., are looking for the man caught on security camera damaging a Holocaust memorial and defacing a local synagogue with swastikas and more.

“Spokane is a community that welcomes different faiths and protects the ability of people to practice those beliefs safely and freely in their places of worship,” said Spokane Mayor Nadine Woodward in a statement. “The symbols and writings are disgusting and desecrate a place of worship and a memorial to those whose lives were lost during a hateful time in world history.”

According to the Spokane Police, the suspect is a white male who was “wearing blue jeans, black boots, a dark-colored jacket with hood, a dark-colored beanie style stocking cap, black gloves, a red mask and sunglasses on his head.”

Temple Beth Shalom’s board of trustees issued a statement on Monday noting that they are saddened by the vandalism, but thankful for the community for their support.

“We are angered by this violation, but also grieve that members of our society carry such hatred. We remain vigilant in our fight to protect everyone’s right to religious freedom and tolerance. We will not let these events deter us from living as Jews in our society,” they wrote. “Anti-Semitism is not only a strike against Jews, but against all who cherish our society for the love and freedoms we have. … The best response is to educate and speak out against hate crimes of any sort, directed at any person or group. Our society should not tolerate this bigotry.”

If convicted, the perpetrator of this vandalism is expected to be charged under the Washington state’s hate-crime statute revised in 2019 to address a rise in bias crimes across the area, including defacing “religious real property with words, symbols, or items that are derogatory to persons of the faith associated with the property.”