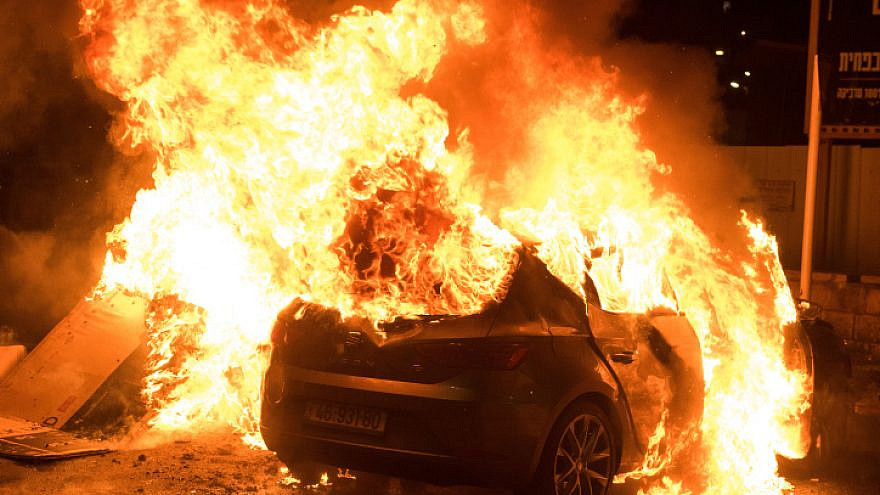 A car burns during violent riots in Akko on May 12, 2021. Photo by Roni Ofer/Flash90.
Spread the word.
Help JNS grow!
Share now:

(May 18, 2021 / JNS) The Israel Police and Shin Bet intelligence agency announced on Monday the arrest of an Arab Israeli man in his 20s on suspicion of hurling a firebomb that seriously injured an Arab Israeli child in Jaffa last Friday.

While the attack was first suspected to have been carried out by Jewish Israelis, the police investigation led to an Arab Israeli suspect, who apparently believed he was targeting a Jewish home in Jaffa, according to Channel 13.

The suspect threw the firebomb through the window of an apartment in which six children were sleeping. A 12-year-old boy suffered serious burns and is hospitalized at the Ichilov Medical Center in Tel Aviv.

A second firebomb was found near an adjacent home, in which Jews lived.

Meanwhile, Israel’s Arab sector called a general strike on Tuesday in solidarity with “the Al-Aqsa Mosque and the residents of Sheikh Jarrah,” according to a statement by the Arab Higher Monitoring Committee, Ynet reported.

The statement added that the strike was also protesting “the violent behavior of settlers in mixed cities.” A number of Jewish employers said employees who observe the strike would be fired, Kan reported.

Meanwhile, Israeli security forces have arrested some 1,000 suspects since the start of the recent riots that have rocked Israel, according to Maariv, with 850 of them being Arab Muslims. Attacks have included stonings, firebombs, arson attacks on vehicles, homes and synagogues, and shootings, including of Israeli police and a paramedic.

Seven Jewish Israelis were arrested on Sunday in connection with a shooting in eastern Jerusalem’s Beit Hanina neighborhood, in which two Arabs were injured. According to Ynet, the shootings occurred in the midst of an attack on Jews in the neighborhood.