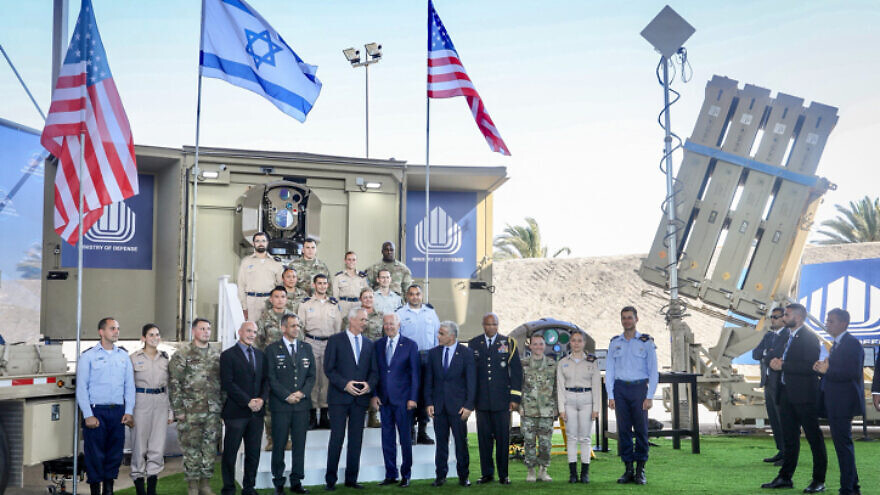 Gantz made his comments after accompanying visiting U.S. President Joe Biden on a tour of cutting-edge Israeli air defense systems, which were transported to Ben-Gurion Airport to be reviewed by the U.S. leader, who is in the country for his first official visit as president.

Biden was shown the Arrow 3 and Arrow 4 missile defense systems, David’s Sling, the Iron Dome and Iron Beam, according to the Israeli Defense Ministry.

Arrow 3, a joint Israeli-American project led by the Directorate of Defense Research and Development (DDR&D) together with the Missile Defense Agency (MDA), “is considered the best interceptor of its kind in the world,” the ministry said in a statement.

“Its interception capabilities are high and long-range, reaching far beyond the atmosphere. In July 2019, the IMDO and the U.S. MDA completed a series of tests of the Arrow 3 weapon system in Alaska, and successfully demonstrated hit-to-kill interceptions of high altitude, exo-atmospheric targets,” the statement continued.

The system’s primary contractor is Israel Aerospace Industries, according to the ministry.

Biden was also shown the Arrow 4, a new interceptor that will replace the Arrow 2 system. The Arrow 4 will operate both inside and outside the atmosphere.

The system is based on a two-stage interceptor missile with “exceptionally high maneuverability and speed capabilities,” the ministry said.

In addition, Biden viewed the Iron Dome system, which has intercepted more than 4,000 rockets, mostly fired by Hamas and Palestinian Islamic in Gaza, since becoming operational in 2011. The system can also shoot down cruise missiles and drones.

“The laser system is effective, precise, easy to operate and substantially more cost-effective than any other existing defense system,” said the ministry. “Israel is one of the first countries in the world to succeed in developing high-power laser technology to an operational standard, as well as the successful demonstration of mortar, rocket and UAV interceptions,” it said.

During the briefing, Gantz presented Biden with a UAV that was intercepted in a successful test of the high-powered laser system that took place in March this year.

“We are extremely appreciative of your leadership,” Gantz told the U.S. leader. “We are grateful for your steadfast support for Israel’s security and for the assistance that was approved, including $ 1 billion for the replenishment of Iron Dome systems” following the May 2021 conflict with Hamas, he added.

“Our regional cooperation includes countries that seek stability and peace. The regional architecture and stability that the U.S. is leading will promote economic growth and the protection of human rights in the region. I am certain that under your leadership and together with U.S. security organizations, we will continue developing defense cooperation on land, in the air, in the maritime arena and in cyberspace,” said Gantz.

He concluded his remarks by saying, “The unique bond between Israel and the United States is stronger than ever. The State of Israel is certain that the president will continue taking the measures necessary to prevent Iran from obtaining a nuclear weapon.”