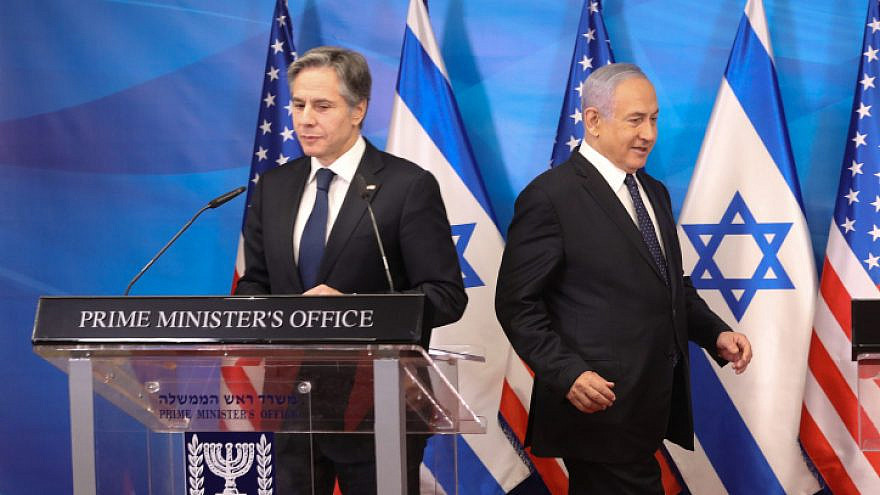 (May 26, 2021 / JNS) While the Biden administration’s negotiations to reach a ceasefire agreement between Israel and Hamas in the Gaza Strip has generally being seen as successful, experts have low expectations that U.S. Secretary of State Antony Blinken’s visit this week to the Middle East will accomplish anything more substantial than to ensure the international community that the United States remains engaged in the region.

Dispatched at the request of U.S. President Joe Biden, Blinken met with Israeli, Palestinian, Egyptian and Jordanian officials as conversations continue on how to secure a lasting ceasefire in the region, with the United States calling for international aid to help rebuild the Gaza Strip without involving Hamas, an internationally designated terrorist organization that controls the territory.

“I think he wants to go and show that America is still there, America is still leading. To basically go and get some of the credit for the ceasefire, which is well-deserved,” Ghaith al-Omari, a former Palestinian negotiator and senior fellow at the Washington Institute told JNS.

Such public diplomacy contrasts with the Biden administration’s apparent policy of conducting diplomacy out of the public view to a point where during the recent conflict between Israel and Hamas in Gaza, the international community accused the president of not doing enough to stop the violence.

Al-Omari said the visit is not a sign that the administration is changing its policy, which is a major shift from the public diplomacy conducted by previous administrations, especially of former President Donald Trump. He added that the administration is also rolling back Trump’s policies towards Israel and Palestine to be back in line with the consensus of the European Union and other allies, and focusing on small, concrete areas of cooperation between Palestinians and Israelis.

But whether the United States can accomplish its goal of helping rebuild Gaza after the latest conflict while bypassing Hamas is seen as highly unlikely.

“Blinken’s trip, coming on the heels of another Middle East conflict, shows how the administration’s desire to wash its hands of the region is easier said than done, just like [former President Barack] Obama and Trump both discovered,” Jonathan Ruhe, director of foreign policy at the Jewish Institute for National Security of America (JINSA), wrote in an email on Tuesday. “I’d expect Blinken to focus on reaffirming the importance of allies in Jerusalem (as he has already), in Cairo and Amman since the United States will need their help in stabilizing the region.”

In the summer of 2014, then-U.S. Secretary of State John Kerry is thought of having prolonged the conflict by bypassing Egypt during “Operation Protective Edge.” Instead, Kerry worked with Qatar and Turkey, which have extensive influence over Hamas, despite not being trusted by Israel or Egypt.

Qatar was also the main source of funding for rebuilding Gaza after the 2014 conflict as other actors in the region didn’t want to have anything to do with Hamas.

“Qatar is a supporter of Hamas. And all of that funding went to Hamas’s benefit,” said al-Omari. “That funding used to come in literally suitcases of cash that was flown into Ben-Gurion [International Airport], taken by convoy to Gaza by the Qatari envoy. So Israel was actually part of that process because they understood that at the end of the day, if you need stability in Gaza, you need to maintain a certain humanitarian level, and you cannot do that without working with Hamas.”

“So I think it’s unrealistic to expect Hamas not to benefit, but there are ways to do it that will maybe reduce the benefit that Hamas gets,” he added.

Alliances built under the Abraham Accords in 2020 have brought new players into the mix, the most significant being the United Arab Emirates.

Al-Omari said that if an Arab coalition that included the UAE and Saudi Arabia can be formed to pledge funding to rebuild Gaza, it would dilute the influence of Qatar. Egypt will be interested in such a partnership, as it is concerned about security on its border with Gaza and the fact that Hamas is an arm of the Islamic Brotherhood, which is the enemy of the Egyptian government.

“Egypt has a very complicated relationship with Hamas. They engage Hamas, they work with Hamas, but also Hamas is part of the Muslim Brotherhood, so they don’t want them to be particularly strong,” explained al-Omari. “And part of it is almost a vestige of the old kind of split between Egypt, with the UAE and Saudi on the one hand, and Qatar and Turkey on the other hand.”

But al-Omari isn’t confident that such a coalition will come together.

“Unfortunately, I think we’re going to go back to the status quo,” he said. “So far, I just don’t see much of an appetite, to be honest, and I fear is going back to where we were before.”

Any real change in Gaza, he said, would require an effort to dilute Qatari influence and create a more robust mechanism on the ground to track where international humanitarian aid is going.

“For all of the creative thinking that we’re hearing, sadly I just don’t see the fundamental dynamics have changed,” said al-Omari. “I don’t see other countries willing to put in the money, and I just don’t see any country that’s willing to actually deploy anyone on the ground and risk death. I hope I’m wrong, but I see that in the end, we’re going to end up exactly where we were the day before Hamas fired the rockets.”

‘They will invest in building more tunnels and producing more rockets’

Israel will also seek to play a bigger role in the negotiations this time around than in 2014.

“We destroyed a lot of their infrastructure, and I think we restored deterrence, but knowing Hamas for many years, I am sure now that they will use the humanitarian aid that they will receive, and they will invest it in building more tunnels and producing more rockets,” said former Israeli Ambassador to the United Nations Danny Danon.

Danon said on May 20 that Israel should bring forward its own humanitarian demands during talks about the reconstruction of Hamas and push for the release of two Israeli citizens—Avera Mengistu and Hisham al-Sayed—being held hostage by Hamas and for the bodies of Israeli Defense Forces’ soldiers Hadar Goldin and Oron Shaul to be returned to Israel.

“I can tell you that in Israel, it is a major issue that we should not allow the reconstruction of Gaza without bringing up our demands, especially the demand to bring back our boys who are being held in captivity under the rule of Hamas,” said Danon.

According to the Associated Press, Blinken told Israeli and Palestinian leaders that the United States had no immediate plans to pursue peace talks between the two sides until there is a better environment.

Blinken’s meeting with Palestinian Authority leader Mahmoud Abbas and Prime Minister Mohammad Shtayyeh are symbolic acts to show that the United States won’t engage with Hamas, and that the P.A. is still the internationally recognized authority. But besides the meeting and the announcement of the reopening of the U.S. Consulate in Jerusalem, the P.A. is completely irrelevant to the negotiations. In fact, it has emerged even weaker from this round of conflict to Palestinians than previously, said al-Omari.

“I hope Blinken spends less time speaking about peace and more time unconditionally standing by Israel, and making it clear to Abbas that if he wants to play a role in Gaza, he needs to clearly show the United States how he can do so effectively, without corruption; and without Hamas, Palestinian Islamic Jihad (PIJ) or other terrorists getting any of the money,”

Jason Greenblatt, the former U.S. special envoy to the Middle East in the Trump administration, said in an email. “This issue was reviewed time and again by many of the donor countries who contributed funds to the Palestinians, and in the three years I was at the White House, no donor country—not one—found a way to do this.”

“Now is not the time to speak about aspirational peace,” said Greenblatt. “After Hamas fired thousands of rockets at Israel, including at Jerusalem, Tel Aviv and other population centers, it’s time for people to finally recognize that before you can get to the issues of any peace deal, you need to accept the fact that the situation in Gaza makes any discussion of peace premature until Hamas and PIJ lay down their weapons and recognize the Jewish State of Israel, which is extremely unlikely, or Hamas and its partner in crime are eradicated.”

Said the former envoy: “Saying anything else is just paying lip service to a noble idea but is unrealistic one at the moment, and certainly does not help Palestinians in any meaningful way.”