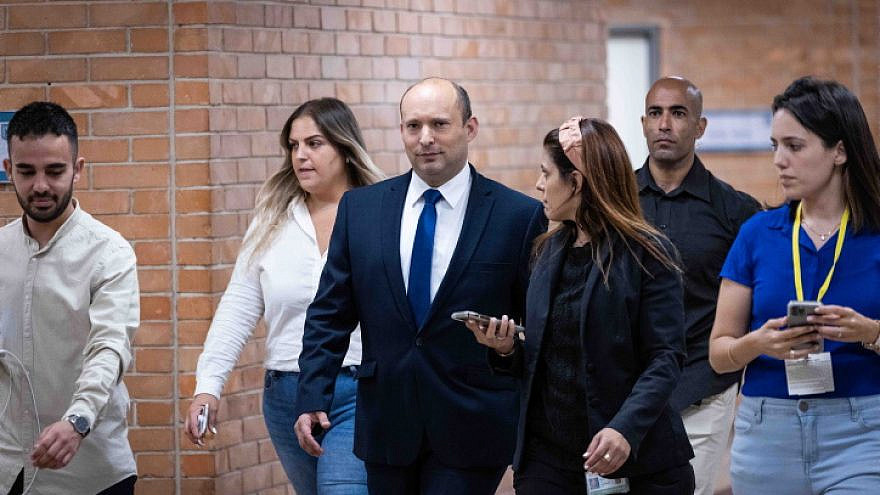 (June 8, 2021 / JNS) Just days before Israel’s 36th government is expected to be sworn in, the coalition agreements signed by its constituent parties were revealed on Monday night by Channel 12.

One of these laws would require a former prime minister to wait four years before running for any office, including that of a Knesset member. Another would ban politicians facing criminal indictment from serving as prime minister. Netanyahu is standing trial in three separate criminal cases.

Netanyahu’s Likud Party was quick to criticize the proposed law.

“After Bennett deceived his own electorate by transferring votes from right to left, only to appoint himself prime minister with six mandates, he is now proposing laws that don’t exist in any democracy in the world, with the aim of disqualifying Prime Minister Netanyahu from running for Knesset and thus taking down the right-wing leader,” the party said in a statement.

The agreements also forbid Bennett from joining any other government if the coalition is brought down in a vote of no confidence.

Under the agreements, the new government will be led by Bennett for 27 months, after which Yesh Atid chairman Yair Lapid will take over as premier. It will be among the largest governments in the history of the state, with 28 ministers and six deputy ministers, though smaller than the 35th government with its 36 ministers.

The 36th government will be first to include an Arab party, Ra’am, an Islamist party associated with the Muslim Brotherhood. Its agreement with the Bennett-Lapid government mainly revolves around illegal construction.

According to the documents, Israeli enforcement with regard to an illegal building will be frozen until 2024, and the destruction of illegally built homes in the Negev will be suspended for nine months. The party has also extracted a promise from Bennett and Lapid that they will request the cancellation of illegal construction fines.

Ra’am will also be given a deputy minister slot in the Prime Minister’s Office, and party chairman Mansour Abbas will receive a discretionary $1.5 billion fund for special projects on which he personally signs off.

The agreement with the Meretz Party includes advancing LGBTQ rights, including the issue of gay marriage and public transportation on Shabbat.

The Yisrael Beiteinu Party, headed by Avigdor Lieberman, has won an agreement to push a civil-marriage law to codify the status of couples who don’t want to be married by the rabbinate or other religious authorities, and the establishment of an egalitarian prayer section at the Western Wall. The party will also receive a Cabinet portfolio unifying the ministries of agriculture, the Negev and the Galilee.

The Labor Party has asked for the establishment of a “Department of Jewish Renewal” within the Diaspora Affairs Ministry to handle issues related to the acceptance of the Reform movement in Israel.

New Hope’s Gideon Sa’ar will serve as justice minister and deputy prime minister. He will focus on splitting the position of Attorney General into two parts and preventing the Palestinian takeover of “Area C” in Judea and Samaria.

Benny Gantz of the Blue and White Party will continue on as defense minister, and will also serve as deputy prime minister. He will establish a government committee to investigate the Mount Meron disaster, the April 30 tragedy during a religious festival in which 45 were killed.