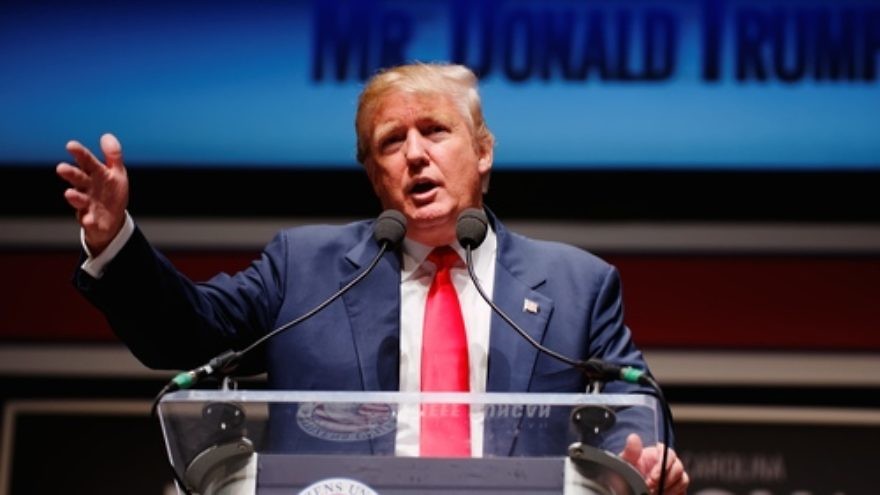 (July 1, 2015 / JNS) In the middle of a phone interview with JNS.org on June 26, billionaire real estate mogul and Republican presidential candidate Donald Trump leaves his desk to scan the wall of his office for awards he has received from the Jewish community.

Trump reads the text of some relevant plaques before returning to his desk. But before this reporter can move on to the next question, Trump eagerly points out that he was the grand marshal of New York City’s annual Salute to Israel Parade (now the Celebrate Israel Parade) in 2004 “at a time when it was quite dangerous to do that” and “a pretty tough time for Israel,” in the middle of the second Palestinian intifada (uprising against Israel). He also cites a video endorsement he gave Israeli Prime Minister Benjamin Netanyahu for the Jewish state’s January 2013 election, expressing pride that it was “at the time the only ad done by a celebrity” for Netanyahu.

What does all of this have to do with the 2016 American presidential election? President Barack Obama won 78 percent of Jewish votes when he was first elected in 2008, and despite a rocky relationship with Israel when compared to most other U.S. presidents, he garnered 69 percent of the Jewish vote in 2012. Trump, however, touts his close relationship with Israel and the Jewish community as the reason he believes he can outperform Republican contenders of both the past and present among Jewish voters.

How close, in fact, is Trump’s relationship with Judaism? Unlike the name of his reality TV show, he is no apprentice when it comes to the Jewish faith. Trump’s daughter Ivanka converted to Judaism in 2009, and her observance of Shabbat with her husband Jared Kushner (a well-known real estate developer as well as the owner and publisher of the New York Observer newspaper) is well-documented.

“I have great respect for [the Shabbat traditions], and I see Ivanka during Saturday, and from Friday evening on through Saturday night, she won’t take phone calls and they live a very interesting life,” Trump said. “And it’s actually a beautiful thing to watch, with Jared and Ivanka. In a very hectic life, it really becomes a very peaceful time. So there’s something very nice about it.”

There are already 14 declared Republican presidential candidates, and many of them are publicly expressing support for Israel, but Trump argues—in his typically brash and blunt fashion—that his history with the Jewish people and the Jewish state can set him apart from the rest of the crowded GOP field.

Below is the rest of Trump’s interview with JNS.org.

JNS: What is your assessment of President Obama’s record on Israel?

Donald Trump: “I think President Obama is one of the worst things that’s ever happened to Israel. I think he’s set back [Israeli] relations with the United States terribly, and for people and friends of mine who are Jewish, I don’t know how they can support President Obama. He has been very bad for Israel.”

What’s your experience with Israel’s business community, which has earned the country the well-known ‘start-up nation’ nickname?

Knowing what you know from negotiations in the business world, how would you approach the current nuclear talks with Iran?

“I would double-up and triple-up the sanctions, and I would make them (the Iranians) want to make a deal. Right now they’re just toying with us.”

What would a good deal with Iran look like?

“You’d have to have onsite inspections anytime, anywhere, to start off with, which we don’t have at all. The whole deal is a terrible deal. There’s no way the Iranians are going to adhere to any deal we make. And if you don’t have onsite inspections anytime, anywhere, they (the P5+1 nations) shouldn’t make the deal. And right now I think they’re just tapping the United States along. We (America) have a bunch of babies negotiating. We don’t have good negotiators. They have great negotiators, and they’re making us look like fools.”

What do you think about America funding the Palestinian Authority to the tune of $500 million per year?

“I’m not exactly thrilled by it. It’s obvious. We have to help people that respect us, that want things to be done and properly done. Not just there (the Palestinian Authority), we’re giving money to all sorts of groups and people and countries that take advantage of the United States, so it’s something that I’m not thrilled about.”

Your recent remarks on Mexican immigrants ignited controversy. Do you stand by your comments, or would you like to clarify them, for the Jewish voters out there who might prioritize immigration as an election issue?

“I have great respect for Mexico and I love the Mexican people. I have many friendships in Mexico and with Mexican people. But Mexico is totally out-negotiating the United States, at our borders and with respect to foreign trade. The people that are coming into this country, and not only from Mexico, many of these people—not all—but many are not people that we should let into the country, which obviously is just common sense. Since I’ve made that statement, I’ve been greeted with tremendous support, from so many people in the United States. We either have to have a border, or we don’t have a country.”

If you won the Republican presidential primary, who would you choose as a running mate?

How did you feel to see the Chinese government actually respond to your comments accusing that country of stealing American jobs through currency manipulation?

“Look, China is like Mexico. They’re taking advantage of the United States. They’re laughing all the way to the bank. Of course they’re going to respond, and they said essentially, ‘Oh no, we love our trading partner, the United States.’ Well of course they should love us, they’re making a fortune off of us. But we make nothing off of them. We get nothing out of that deal, believe me. That would change if I become president.”

What broader principles should America apply to any negotiations, whether it be with Iran, China, Mexico, or other nations?