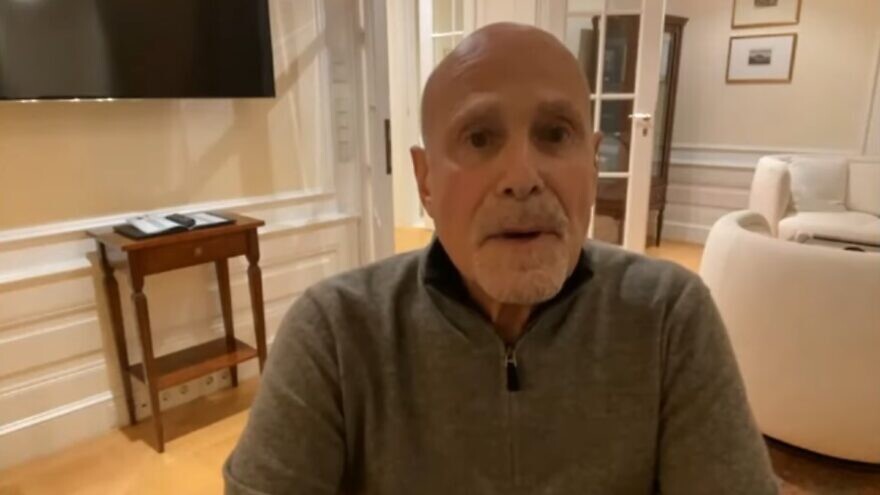 (January 19, 2022 / JNS) Former-U.S. hostage in Iran Barry Rosen announced on Wednesday that he has begun a hunger strike to raise awareness about foreign nationals being held by the Iranian regime.

“It’s very simple. I’m doing this hunger strike because I care about those hostages that have been taken by Iran and imprisoned by Iran as bargaining chips in any way, shape or form for some political maneuver by the Islamic Republic of Iran,” he told JNS as part of an exclusive interview with Ellie Cohanim.

“This is going on for too long—four decades of hostage-taking. I just felt that I had to do something.”

In a video posted on Twitter, Rosen declared his hunger strike outside the Palais Coburg hotel in Vienna, where talks between Iran and the P5+1 (the United States, the United Kingdom, France, Russia, China and Germany) are taking place on reviving the 2015 Joint Comprehensive Plan of Action (JCPOA), more commonly known as the Iran nuclear deal.

Rosen, 77,  was one of 52 Americans who were taken hostage in Tehran in 1979 by Islamic radicals when they seized the U.S. embassy in 1979 during the country’s Islamic Revolution.

He began the hunger strike the day before the 41st anniversary of his and the others’ release on Jan. 20, 1981. He said that while he is not eating, he is drinking water, taking electrolytes and consulting with a doctor.

‘Get its act together about punishing human-rights violators’

Rosen said that his hunger strike aims to raise awareness of the plight of at least a dozen Iranians with dual nationalities, including four Americans, who are detained in Iran.

Despite the signing of the 2015 nuclear deal, Iran has continued to arrest foreign nationals from the signatories. Before talks resumed last year, the United States, the United Kingdom, France, and Germany called on Iran to release their detained nationals.

“In addition, I feel it very strongly that not only that if there is an agreement, and Iran, as usual, takes hostages, then the agreement should be null. And because otherwise, it’s just a piece of paper that Iran will use to get whatever cash it needs,” he said.

Rosen thought it incumbent upon the U.S. and other Western powers to “get its act together about punishing human-rights violators.”

“Iran is right on top—one of the major human-rights violators, not only of hostages but political prisoners, too,” he said.

The Biden administration, while praising Rosen and the other U.S. embassy hostages as “heroes,” has called on him to stop the hunger strike.

“We strongly discourage him from doing so in the interest of his health,” a U.S. State Department spokesperson told Voice of America.

On Wednesday, Rosen also met with Robert Malley, the U.S. special envoy on Iran. While he declined to go into details of his conversation with Malley, Rosen described it as cordial and candid.

“I think that we both actually were very candid with each other about what my point of view was and what he thought the situation is now in terms of the agreement and also the hostage situation,” he said.

To view the full interview with Barry Rosen, click here.