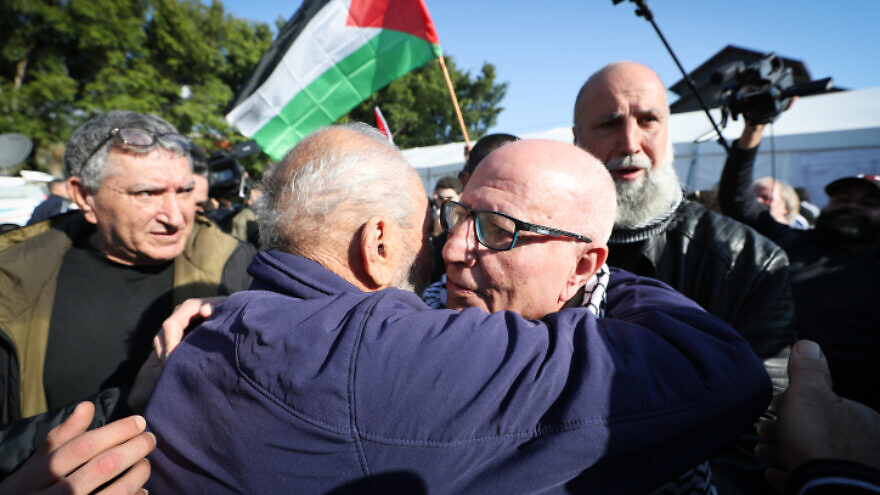 Family and friends in Ar'ara greet convicted Palestinian terrorist Karim Younis, who was released on Thursday after serving a 40-year sentence for murdering an Israeli soldier in 1980. Jan. 5, 2023. Photo by Jamal Awad/Flash90.
Spread the word.
Help JNS grow!
Share now:

(January 8, 2023 / JNS) The Israeli Defense Ministry has revoked the entry permits of three senior Palestinian Authority officials after they participated in a homecoming ceremony for a convicted terrorist released from prison last week.

The three officials, including an assistant to P.A. chief Mahmoud Abbas, arrived in the Arab Israeli town of Ar’ara, in northern Israel, to greet Karim Younis, an Arab Israeli jailed for murdering Israel Defense Forces Cpl. Avraham Bromberg in the Golan Heights in 1980, Kan News reported on Saturday.

The three individuals were identified in the report as Mahmoud al-Aloul, deputy chairman of Fatah’s Central Committee, Azam al-Ahmad and Ravhi Fatuh.

The move was taken “after consultation with all relevant defense establishment elements,” Defense Minister Yoav Gallant’s office said in a statement, adding that the three exploited their position to take part in the celebration.