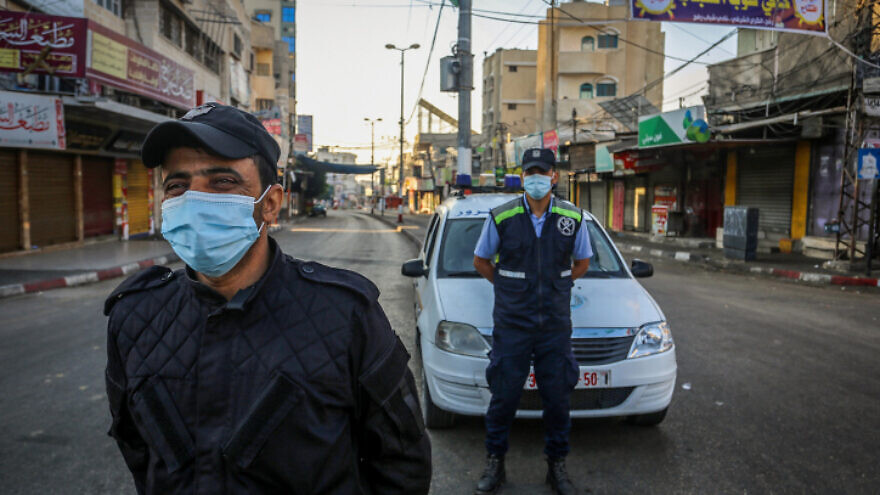 (August 27, 2020 / JNS) Hamas on Thursday extended the lockdown in the Gaza Strip for an additional three days, after two deaths and 26 new COVID-19 cases were recorded outside border quarantine facilities.

Earlier this week, a Hamas spokesman confirmed four cases of coronavirus infection in a single family in a refugee camp, which led to the initial, 48-hour lockdown on Tuesday.

By late Wednesday, health officials in Gaza revealed that 26 people in different locations had tested positive for the virus and two patients had died, Ynet reported, indicating that the pandemic had penetrated the densely populated enclave. Access to the Gaza Strip is heavily restricted by Egypt and Israel.

According to the report, Ignacio Casares Garcia, head of the Gaza Subdelegation of the International Committee of the Red Cross, said in a statement that Gaza’s health-care system “would not be able to deal with more than a few dozen coronavirus patients,” and expressed the need for international aid.

According to the report, the Gaza Communications Ministry said that it had received $30 million from Doha on Friday, a third of which would be distributed to 100,000 needy families. The report said that hundreds of Palestinians lined up at post offices on Saturday morning to receive the $100 allocated per family.

In March, Qatar announced $150 million in aid to the Gaza Strip, to be distributed in monthly payments of $25 million, to support United Nations humanitarian programs there and bolster efforts to contain the coronavirus outbreak.

Hamas denies Hebrew media reports attributing the recent upsurge in incendiary balloon and rocket attacks against Israel from Gaza to an attempt by the terrorist organization to pressure Qatar into continuing these payments, which are slated to stop at the end of this month.

Hamas spokesman Hazem Qassem told Al-Monitor that the arson attacks are a popular reaction to the “ongoing siege” of Gaza, which he said had “overstrained the humanitarian situation” there.

The London-based Arabic-language daily Asharq al-Awsat reported on Monday that the commander of the IDF’s Southern Command, Maj. Gen. Herzl Halevi, had flown to Qatar in an effort “to restore calm” between Hamas and Israel.